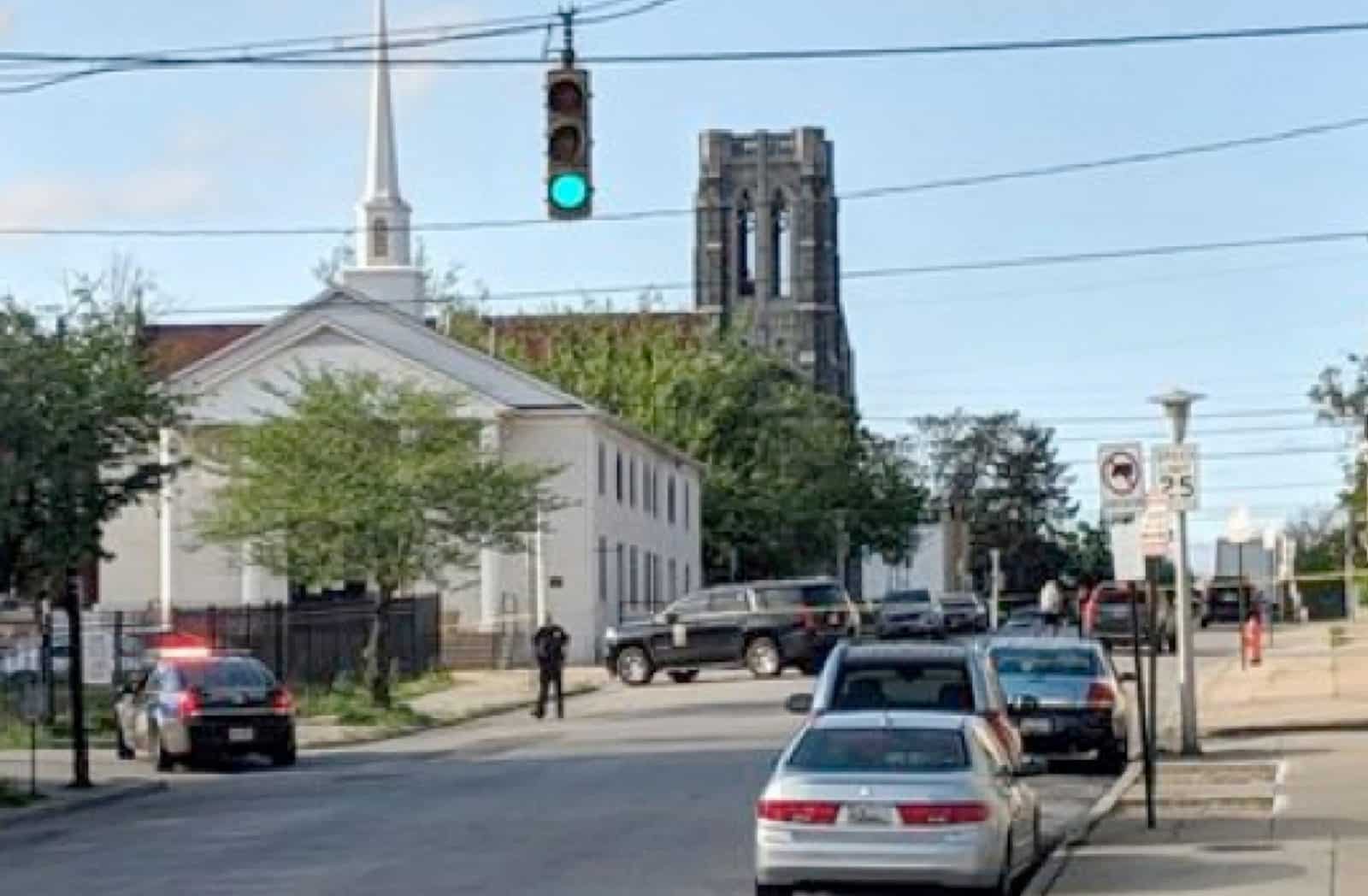 Seven people gunshoot near Perkins Square Baptist Church in Baltimore, Maryland, according to police reports. One of them has died. The bomber would be on the run. This is what happened around 3 pm (Maryland time, 9 pm in Italy).

The report becomes international in Russia Today’s network website which refers to the twitter profile Citizen Baltimore, an active subject in signaling social alarms on the territory. As you can see from the images published on social media in this afternoon there was a massive presence of Police next to the Baptist Church of Perkins Square in Baltimore and to a nearby dirt road after a mass shooting near Whitemore Ave & Edmondson Ave.

The police have confirmed that one of the seven victims died. The crime scene has been surrounded and frantic investigations are underway. The agents are trying to manage if there are other victims of the gunshooting that would have taken place during an outdoor lunch. «Police spokesman Commissioner Michael Harrison confirmed that the gunman opened fire once he approached the cookout, killing an adult man on the spot.

The body of the slain victim was recovered about a block behind the church, according to Acting Mayor Jack Young – report Russia Today – Harrison said that it appears that someone on the scene returned fire in an apparent bid to stop the attacker. Police said that the suspect, who is still at large, is an unidentified black man». The Baltimore Sun correspondent Phil Davis tweeted about the researches around a barber shop. At the moment there aren’t proofs of a connection from the attack and the Bapstiste community, as the earlier news tell. 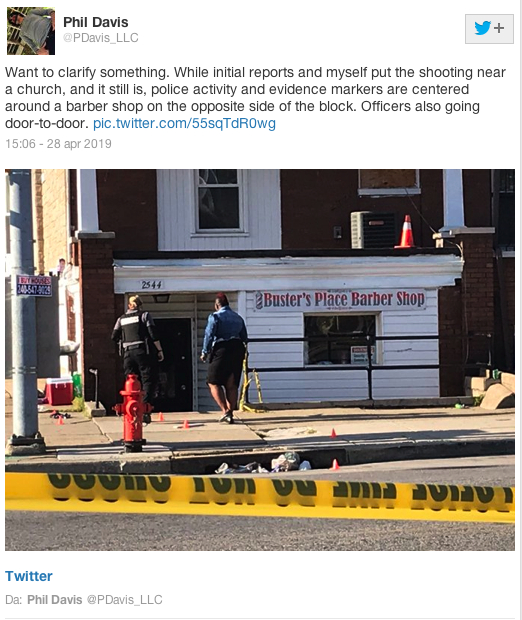 The gunshooting happens the day after an armed man broke into the Poway synagogue, not far from San Diego, California, in an apparent anti-Semitic attack. The suspect’s name, John Earnest, was linked with a poster full of hate that appeared online before the attack in which a woman died and three people were injured (a man, a woman and a girl). The Jewish center of the Congregation Chabad where many faithful gathered on Saturday morning for the celebrations of the Passover theater of the shooting. The 19yo would write some letters denouncing his hatred of Jews and other people. This was written by Rita Katz, the site manager for Site, which monitors the web and social media. The boy wrote that he was inspired by Brenton Tarrant, the man who made a killing in a mosque and in an Islamic center in Cristchurch, New Zealand. The man would have opened fire with a semi-automatic rifle and was stopped during a brief firefight with the agents while attempting to escape.

Still alive in the USA is the memory of the massacre of the synagogue in Pittsburgh, Pennsylvania, which took place exactly six months ago, on October 27, 2018, when a man, Robert Bowers, went into action and killed 11 people, in what is considered the most serious anti-Semitic attack in US history.

In the case of Poway it is not yet clear whether the motive for the shooting is anti-Semitism, even though the mayor of the town Steve Vaus spoke in front of the “hate crime” cameras and stated that the target of the shots was just the Jewish community: “I believe that the author of what happened – he said – was moved by hatred for this community”. But little is known about the man arrested at the moment, nothing has been disclosed and in these hours he is under the investigators’ press. Meanwhile, in Poway’s Jewish community it is bewildered by what happened.

THE ISIS MASSACRES IN THE CHURCHES OF SRI LANKA

In the latest articles on the massacres in the Christian churches of Sri Lanka we highlighted the too obvious clamorous flaws in intelligence before the attacks: the Indian one that released the imam kamikaze after learning of the planned attacks and the Sri Lankan which did not take due account of the reports. To this is added the international intrigue between Islamic entrepreneurs, one of whom was arrested and already a prominent exponent of an ex-communist party, the politicians in conflict with each other and the suspects on a minister of the Muslim party.

In other reports we have highlighted the close correlations between the Qaedist militiamen of Al Nusra and White Helmets, the alleged aid organization founded by a former UK military intelligence officer, as well as US Army operations to free, in change of tons of gold, the Isis chiefs also with a blitz in an Afghan prison controlled by the Taliban.

The Al Rukban refugee camp which would be the site of the hideout of ISIS terrorists where Brenton Tarrant, the Christchurch bomber, suspected of being close to the Mossad, Israel’s secret service, a country where his presence was ascertained, was trained. Oppose the alarm of the American president Donald Trump on the eight hundred Western Terrorist Fighters but his total silence on the same number of Saudi Arabia FTF.

News items punctually documented by the articles of Gospa News and reported by the American site of military geopolitics Veterans Today, founded by veterans of Vietnam digested by war policies and by too many Pentagon implications with various Islamic terrorist organizations. Verified information not just hypotheses or opinions. In spite of this, the massacres continue to happen as if repeating on an international scale the strategy of terror that became famous in Italy in the Eighties for the mysterious massacres on which the shadow of the paramilitary organization Gladio – Stay Behind. We will deal in other articles with what we have already called the Anglo-Zionist-American Masonic Triad that governs through the international Deep State in the service of the New World Order. For now let’s remember what happened …

THE MISLEADED BLOODSHEDS IN ITALY

These conspiracies have played a very important role, as confirmed by the investigations, covered up or misdirected, on the most atrocious and infamous attacks in Italy for which various material authors were tried (sometimes sometimes convicted of acquittal) but no hidden principal: from Portella della Ginestra (1947) to Piazza Fontana in Milan (1969), from Via Fani for the kidnapping of DC president Aldo Moro (1978), DC-9 of Ustica and Stazione of Bologna (1980), Via Pipitone in Palermo to eliminate the judge Rocco Chinnici (1983), Capaci to kill the judge Giovanni Falcone and Piazza d’Amelio in Palermo to kill his colleague Paolo Borsellino (1992).

“There is a red thread that links all the great crimes. A single political project … “. To say it, before being detonated with his escort, it was Chinnici, Head of the Education Office of the Court of Palermo. To argue that at least on the Moro Crime a “sarcophagus of state lies” was built was the final report filed in 2017 by the last bicameral committee of inquiry. To believe that behind the massacre of Via D’Amelio there was “one of the most serious misdirections of Italian judicial history” is the Court of Assizes of the Court of Caltanisetta that in 2018 sent the documents to the Attorney General of the Court of Appeal of Messina to investigate the magistrates who made the inquiry for which today three policemen are on trial for aggravated slander. I believe all this is sufficient, remembering how the Freemasonry, Mafia and Cia triangulations are as old as the Unification of Italy … Read below!