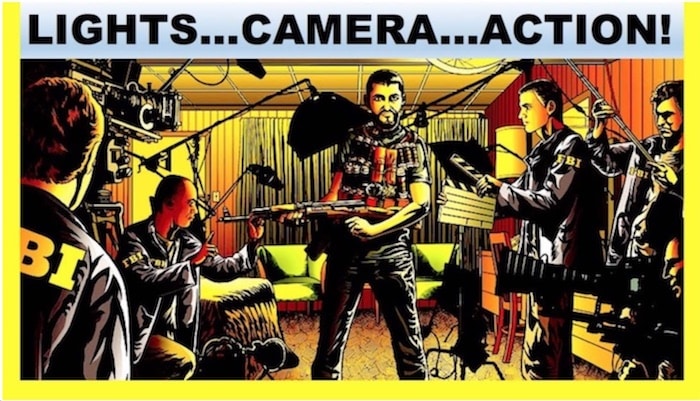 Does anybody still believe anything they read in the papers? If so, there may be someone out there who thinks the FBI just stopped a dangerous “radical Muslim terror plot” from spreading mayhem in Southern California.

But all you have to do is read the MSM news stories themselves to see that the whole thing is a complete farce.

A “recent Muslim convert” named Mark Domingo has been charged with “providing material support for terrorists.” He supposedly bought nails at a hardware store for terrorists planning to bomb a Nazi rally that never happened, probably was never even intended to happen.

But who were these “terrorists” he “materially supported”? The Washington Post reports: “Authorities said Domingo had no known co-conspirators and does not constitute an ongoing threat.”

Wait a minute! He “had no known co-conspirators” and yet he is charged with “providing material support for terrorists” in the form of buying somebody a bag of nails. Something here doesn’t add up.

Actually it DOES add up if you’ve read Trevor Aaronson’s The Terror Factory. Aaronson describes how virtually all of the hundreds of “Muslim terror plots” busted up by the FBI since 9/11 have actually been FBI terror plots.

So what happened to Mark Domingo is obvious: One of the masterfully persuasive con men the FBI hires to manufacture fake terror plots and foist them on hapless patsies discovered that Domingo was an easy mark. After strong-arm persuasion (if not MK-Ultra style hypnosis) Domingo was brainwashed into saying stupid things and buying some nails.

In other words, Domingo is being charged with PROVIDING MATERIAL SUPPORT TO THE FBI: the only real “radical Muslim terrorist group” in America.

In all likelihood, Domingo was “recently converted to Islam” by the same FBI informant who created the fake terror plot AND the fake Nazi rally that was supposedly targeted. In other words, the whole thing was a gigantic FBI-scripted fantasy. It was a Hollywood extravaganza that needed just one walk-on actor—the patsy. So they had their slick con artist informant find a suitably suggestible dufus…and the rest, as they say, is history.

If the Bureau keeps lying, wasting tax money, and ruining people’s lives like this, they might eventually piss off enough people to scare up some real violence. A pre-emptive drone strike on their headquarters might be one way to nip that threat in the bud ; – )