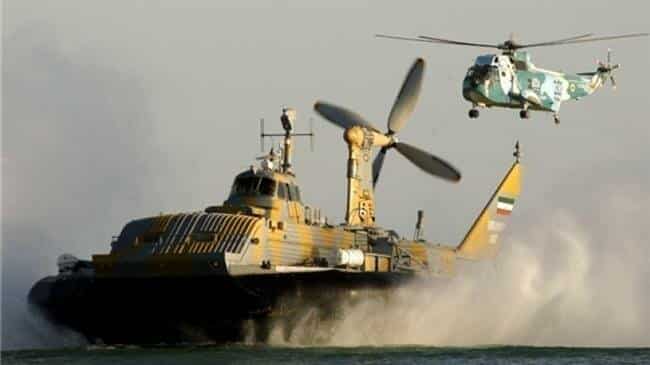 [ Editor’s Note: This is a game changer for the US and NATO plans, in terms of isolating Iran or engaging it militarily at a point of its choosing after someone, possibly the Israelis, organized the right false-flag attack on a US facility or personnel, like a mini-9-11.

The Persian Gulf is a long way from Russia, and represents a major investment in time to station ships there when Russia has its own border defense issues, with the US and NATO full bore on their former Cold War encirclement plans of Russia and China.

Oh yes, China will be coming when it is ready, as the Persian Gulf is a big Silk Road waterway stop. With all the huge investment going into the New Silk Road, the ability to defend it will be woven in, a topic not touched by mass media yet.

A Russian fleet is big deal even if it consists of three ships, because a visiting fleet for “defensive” drills would be something you would want to do before announcing a basing agreement for the Russian Navy at an Iranian port, a permanent presence, which is a tripwire.

NATO could scream all it wanted about Russian aggression as it opened its “2nd” overseas base after Tartus in Syria, but that would make a laughing stock of NATO, afraid of Russia’s two bases compared to the US’ 800, plus NATO bases, now close to the Russian border.

This announcement came after the Moscow 8th Conference of International Security (MCIS). Oh, you had not heard that went on? Gosh, Western media must have missed it. I have Googled it, and what I found is a blackout of Western coverage on the internet. The Nation was the only US media to cover it.

That shows that our “minders” don’t want people to know, which shows fear on their part. The big question would be to ask “fear of what” – the Russians getting basing rights there, and then the Chinese following?

But it looks like we will not have to wait long to see when China is joining in. The Chinese signed a major military cooperation agreement with Iran at the CIS conference. These things always start with “training” cooperation, and then move to basing, and then to hardware being stationed inside a country to support an ally’s presence.

Who would be blamed for creating the situation where they would even want to be there when the South China sea is in play? Do China and Russia both want to tie Central Command up more in the Gulf? The Israelis will have a cow over this one …Jim W. Dean ]

Iranian and Russian military forces will stage a rare naval drill in the Persian Gulf later this year, the commander of Iran’s Navy has announced.

Rear-Admiral Hossein Khanzadi made the announcement during a press conference on Monday upon return to Tehran from a high-profile visit to China, where he met with his counterparts from other countries.

“Our negotiations with Russia revolved mostly around technical and operational topics and we plan to hold a joint naval exercise” this year, he said.

While Iranian and Russian naval forces have in the past trained together in the Caspian Sea, the upcoming Persian Gulf drill is expected to take bilateral cooperation to a new level.

The announcement comes at a time when Iran has threatened to close the Hormuz Strait, a strategic chokepoint through which a large chunk of world’s oil transits every day, in response to threats by the United States to zero out Tehran’s crude exports.

Iran has in response designated the US Central Command (CENTCOM), which oversees all US forces’ operations in the region, terrorist and vowed to confront those forces in case of any trespassing on its territorial waters in the Persian Gulf.

In January, Admiral Khanzadi said upon announcing joint drills in the Caspian Sea that military-to-military work with Russia “will surely take us to a new level of cooperation in strategic, tactical, and operational areas at sea.”

The Iranian Navy has celebrated significant advances over the past years and expanded its global operating range.

Admiral Khanzadi announced that the force would soon receive the Damavand destroyer, which he said is currently being equipped with the latest domestic technologies for naval combat.

The Iranian commander also announced that he had signed an extensive cooperation agreement with Chinese authorities during the trip.

“Expanding technical and training capacities will be some of the issues we have on agenda for our interactions with the Chinese Navy,” he added.

Khanzadi noted that besides China, Iran has received invitations from India, Pakistan and even Italy for joint training projects.

“Currently, our officers are being trained in some of these countries and some of them have sent officers to Iran to receive training,” he said.

“The Islamic Republic’s tankers are part of our country’s territory and we will surely protect them,” he asserted.