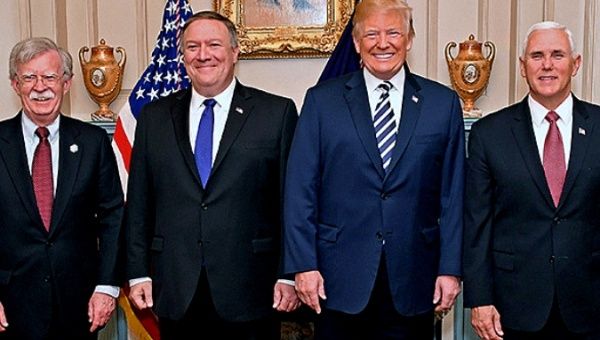 __________
TeleSUR
US Publicly Admits Support for Coup Attempt in Venezuela

International law seems to matter little to the United States (U.S.) government as they once again have publicly expressed support for a coup attempt against the constitutional and democratically elected government of Venezuela.

One of the first to ratify his support for the destabilizing attempt was U.S. Senator Marco Rubio, who since early Tuesday morning as news of an attempted coup reached the world, has tweeted 30 messages vehemently to express his desire to see President Nicolas Maduro deposed.

In response, Venezuelan state officials have denounced the comments issued by the foreigner government leaders. “In a shameless and immoral way, the US government recognizes its authorship in this criminal attempt of a coup in Venezuela! They show the world their desire to destroy our Homeland!” Vice President of Venezuela, Delcy Rodriguez, tweeted on Tuesday.

Early this Tuesday Minister of Communication Jorge Rodriguez reported that a group of about 50 soldiers located in the Altamira highway, in eastern Caracas, to promote a coup supporting the far-right’s agenda.

To @jguaido, the National Assembly and all the freedom-loving people of Venezuela who are taking to the streets today in #operacionlibertad—Estamos con ustedes! We are with you! America will stand with you until freedom & democracy are restored. Vayan con dios! #FreeVenezuela

U.S. Secretary of State, Mike Pompeo stressed that his government “fully supports” what the far-right and the U.S. guiding hand have dubbed as “Operation Liberty.” Vice President Mike Pence and Senator Rick Scott (R) have also shown how invested the U.S. is the current destabilization of the South American nation.

Venezuelan Foreign Minister Jorge Arreaza denounced these U.S. initiatives, especially that issued by Pompeo, saying that he “makes a spectacle of diplomacy, by promoting and financing a violent coup in Venezuela. Washington’s obsession with controlling Venezuela’s oil wealth leads them to clumsiness”.

The government voices from the U.S. keep piling on. Dick Durbin, the Democratic whip in the Senate has also supported the attempt as well as National Security Affairs (NSA) Director, John Bolton. While the White House said that Donald Trump was being kept informed about events in Venezuela as they unfolded, no statement has been provided yet. As the situation unfolds, the “usual suspects” show their clear standing.