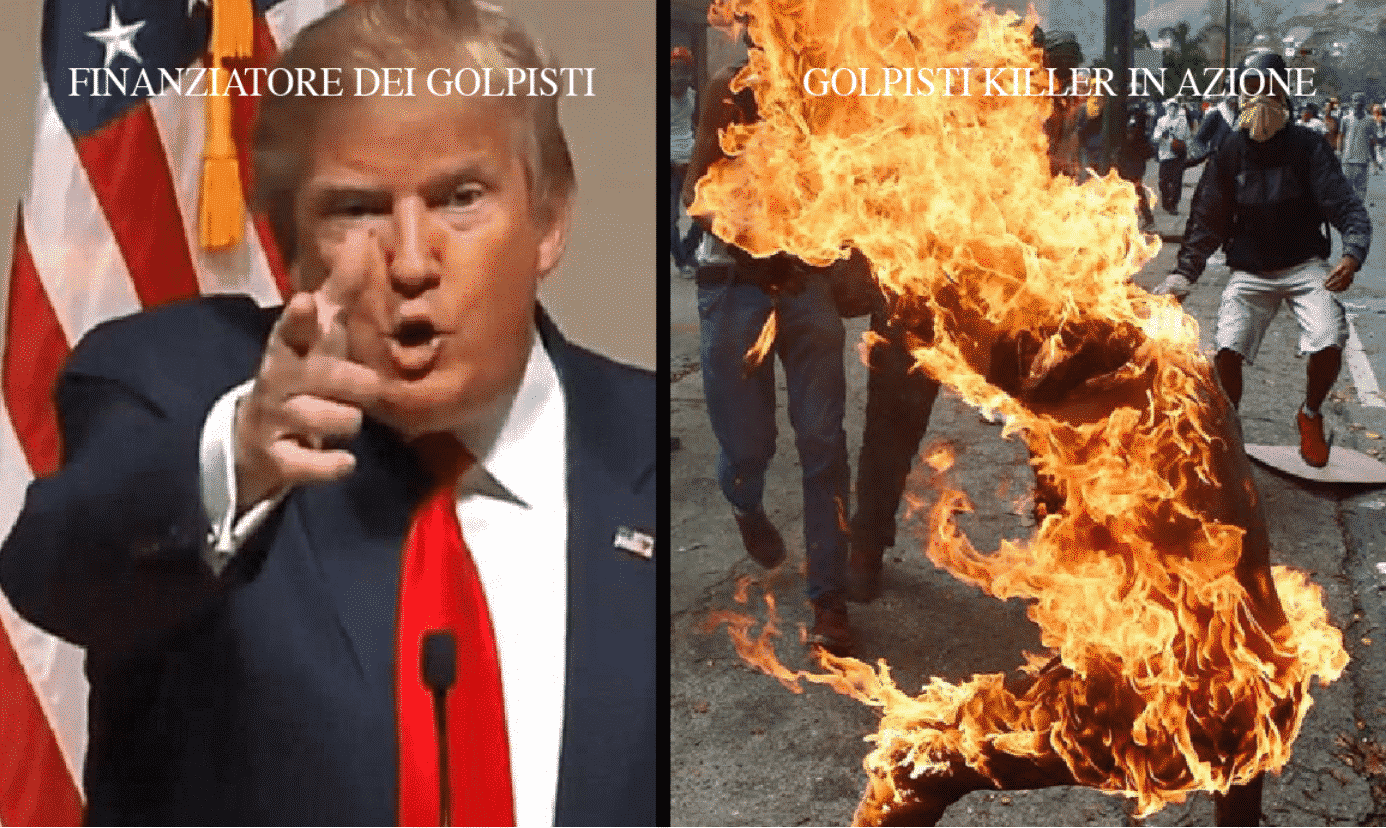 The specter of a war in Venezuela is getting closer and closer: it is hardly military given that Russia and China defend the country from US devastation plans; more probably a civil war that will even more massacre the people torn by American sanctions in the midst of economic and social growth.

I have been following the events in Venezuela since January every day for a few months. I was the first and only journalist in the West to write about the terrorist fire at the Caracas power plant that on 11 March 2019 lit up the night of the capital for about five hours with flames over twenty meters high but was totally ignored by the media Europe, the USA and much of the world. For one simple reason: it was the proven evidence of US-funded sabotage for the coup in Venezuela,

THE JUDGE: GOLPE VENEZUELA IN THE SUSPECTED PLANS US SPY

Before starting to write these few lines, after a dozen articles on the attacks in the Caribbean by criminals smelling of CIA-NSA-USAID, I wanted to look at the film The Rubber Wall by Marco Risi. A fur that did not have the deserved success because for a certain period it was banned in film reproduction by the Courts as it told the true story of how 81 people died on the DC-9 Itavia plane shot down by a missile of unknown origin although within a radius of NATO action.

That it was a rocket that caused the massacre only sanctioned a civil compensation investigation because the criminal investigation ended with the acquittal of the generals of Aeronatica accused of high treason because they were held responsible for their cover-ups of the crime of rapid prescription judicial of “disturbance” to justice and not of “impediment” that would have represented a much more serious violation without prescription. Damned Cassation for the umpteenth time …

LOBBY WEAPONS – REPORT 1: THE US WARRIORS

Remembering all these filthes under the sign of NATO and the Deep State, how is it possible to believe the US president Donald Trump, supporter of the arms lobby, and his entourage that is much more accommodating in freeing ISIS leadersthan in trying a dialogue with the Venezuelan president Nicolas Maduro? Up to this point it is meat for pigs that obviously believe international politics legitimized to everything in order to preserve a certain order: perhaps the New World Order that in 1956 the Canadian commodore William Guy Carr had discovered to be the soul of the satanic Masonry of the Italian-American binomial Albert Pike and Giuseppe Mazzini . I don’t want to digress. Who wants to understand read the pages of the menu of Gospa News Masonry and Conspiracies.

I do not want to go back to the past I limit myself to the present: to the disaster created in Libya by the killing of Muhammar Gaddafi by the will of NATO inspired by that evil warlord of Hillary Clinton, repudiated to the presidential even by the lobbies of weapons, and by the infamous delinquent on duty at the head of a nation like France that is based on the historic bloody success of the guillotine against those who thought differently from the communists created by the Illuminati Freemasons of Bavaria.

THE HOLOCAUST OF THE MASSON COMMUNISTS

What really disgusts are the idiotic journalists who are blinded by globalist bias, perhaps largely paid for by it, who support and divulge these shames of repeated fake-news. On Venezuela in the West there has been no analysis and balance of judgment for at least ten years: or since the US agency USAID began to forcefully finance the coup NOT MADE by most of the population loyal to Nicolas Maduro as an expression of that Bolivarian Christian Socialism that has enabled the country to grow rapidly even in the UN rankings of the Human Development Index. At least until 2016 before the sanctions of Obama and Trump, who are hungry for oil at a good price, began to strangle the economy.

MADURO: THE LATIN ASSAD FEARS WITH THE PETROCOIN

Who does not know this or is an idiot or is an evil accomplice. Like those who hid the death of 81 Italians on the DC-9 Itavia crashed in Ustica. Infamous. Bastards. Globalist evil. Maduro’s greatest sin is to be more or less Christian and not being able to use Chinese or Arab methods to annihilate political opponents. The American hypocrites who denigrate and condemn him are the same as those who finance Saudi rulers who have just beheaded 37 people in a few days. Because they weren’t fit for the system … Anyone who is afraid of dying should immediately make the sign of the cross!