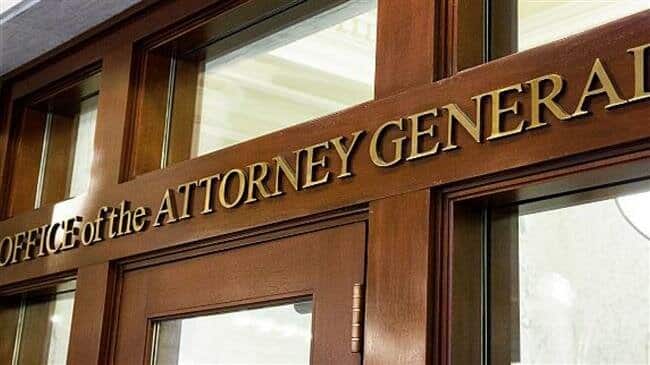 [ Editor’s Note: This is the same prosecutor’s office that will be going after Trump on his fake foundation, online degree hustle, and a list of other goodies. The dual Congressional and then State investigation makes controlling both more difficult for those wanting to prevent damaging disclosures.

The new storm blowing into Trump town is that on May 6th Deutsche-Bank and later Capitol One will begin turning over bank records to the House committee on all family finances.

The Trump family has sued to stop, on the grounds that the request is too broad and a fishing expedition. But Cohen’s testimony is on the record that Trump juggled the books to suit whatever he was doing at the time. Expect to see Trump’s long-time family accountant to be a key witness in all of this.

Attorney General Letitia James is beginning to get documents from Deutsche Bank that had been subpoenaed in the Trump organization money-laundering investigation; so while Trump is stiffing the Congressional committee’s investigating him, the NY AG’s office is rolling forward.

With the NRA scandal dropping out of the sky on us, we find Ollie North is in the crosshairs for allegedly wanting to turn the NRA into his piggybank.

But for Wayne LaPierre, he will be having to address the improbability of his not knowing that a reported $30 million of Russian oligarch cash was being laundered through the NRA into the Trump campaign.

As Gordon caught, this move does not come under the protection of the Citizens United Supreme Court case because a US corporation was not used as a conduit.

Even the Mueller investigation people showed little interest in this, so one has to ask, “why not?” And so far, neither has the media shown interest, even though VT has published it; and we know they follow us for open source Intel, but never give us credit.

So we have the stage set for what could be the biggest NRA scandal in its history, and yet the worst part of it is the oligarch money-laundering being treated like an invisible elephant in the room.

This story broke right after the Russian NRA operative was sentenced last week to 18 months, with the Russian oligarchs mentioned in her case, but not on their laundering campaign contributions through the NRA. What’s up wid dat after such a long investigation? … Jim W. Dean ]

The office of New York Attorney General Letitia James has begun an investigation into the National Rifle Association amid the lobbying group’s internal dispute.

“As part of this investigation, the Attorney General has issued subpoenas,” CNN cited a spokesperson for James as saying on Saturday.

The spokesperson, however, did not elaborate on what prompted the investigation.

“We will not have further comment at this time.”

This comes after the gun-safety group, Everytown for Gun Safety, said it had lodged a complaint about the NRA’s tax-exempt status with the Internal Revenue Service.

The group said they filed the complaint over a recent report by The Trace, in conjunction with the New Yorker, that alleged a number of executives, contractors and vendors affiliated with the NRA “have extracted hundreds of millions of dollars from non-profit’s budget.”

“In light of the recent, credible allegations of excessive invoicing and personal enrichment by insiders, it’s encouraging that the New York Attorney General is looking into the NRA, and we renew our call for other state and federal authorities to do the same,” said John Feinblatt, president of Everytown for Gun Safety.

Meanwhile, the group is currently grappling with a dispute between its president, Oliver North, and chief executive officer, Wayne LaPierre.

North has accused LaPierre of financial misconduct, according to the Wall Street Journal, which also reported that James’ office had sent a document preservation order to the NRA on Friday.

The current investigation focuses on “related-party transactions between the NRA and its board members; unauthorized political activity; and potentially false or misleading disclosures in regulatory filings,” a person familiar with language used in the order told the Journal.