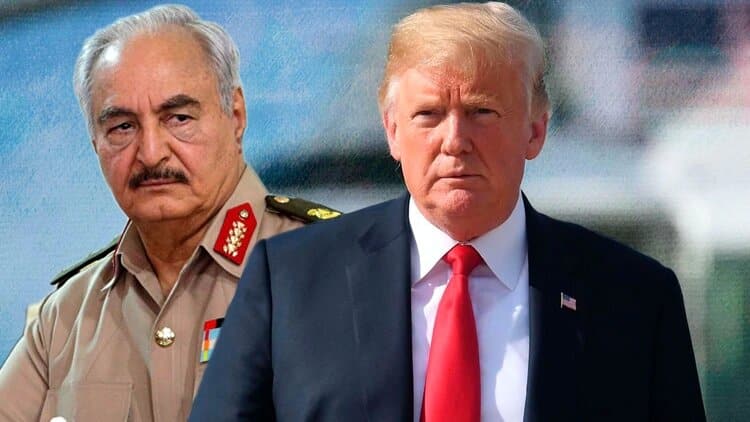 by Alireza Hashemi, …and the Tehran Times

[ Editor’s Note: The Libyan current conflict is off the front page now, with places like Venezuela the current focus. But MSM keeps moving public focus around as a moving target.

That, along with the demonstrated public short attention span generally insures that the hidden hands that are always involved in these “uprisings” or whatever you want to call them is obscured.

VT had covered this story when Haftar made is recent move on Tripoli, including his being a long time CIA asset after the US pulled his fanny out of the fire in Chad when it was a PoW there.

All of the well funded and staffed mainstream media had somehow overlooked that well known tie in. So I was happy to get Ali’s piece today as another example of MSM being in the bag on another war.

There is no white knight in the Libyan War. One set of gangsters is fighting another set with international support from regional powers doing their chess game thing, the real world kind.

Royals in particular enjoy this as it gives them something to do and makes feel like they are real players, when they are being played themselves but don’t know it yet. But Trump and Haftar working together?.. now that’s two peas in a pod for sure, except that Trump is not a known CIA asset… Jim W. Dean ]

TEHRAN – The world was taken by surprise this Friday after news broke out that U.S. President Donald Trump had held a phone call with the Libyan renegade commander Khalifa Hafter four days earlier.

The conversation itself was even more shocking, as a White House statement said Trump had called Haftar to “discuss ongoing counterterrorism efforts to achieve peace and stability in Libya”.

To many people’s surprise, the U.S. president called the warlord who ignored numerous calls for political resolution of differences with the Libyan government and launched an assault on Tripoli on April 4 to discuss efforts to restore “peace and stability” to the country!

Interestingly, Trump shares his vision for Libyan democracy with a former Libyan general who has openly declared is no fan of democracy. Haftar had told the French magazine Jeune Afrique in an interview in January that Libya was not “ripe for democracy”.

Haftar launched his operation during the UN Secretary General Antonio Guterres’s visit to Tripoli, and less than two weeks before a planned conference to pave the way for democratic elections in the country.

The call, signaling the U.S. was throwing his weight behind the Libyan general, was interpreted by some observers as an apparent reversal of the U.S. policy on the country, taking into account strange remarks by U.S. Secretary of State Mike Pompeo earlier this month calling for a halt to Haftar’s offensive.

However, the case is hardly a reversal as Pompeo’s remarks were not followed by any actions and last week the U.S. even rejected a UN Security Council resolution calling for an end to clashes near the Libyan capital.

Given Trump’s praise of Haftar for “securing Libya’s oil resources” in their phone conversation, it appears Haftar has indeed been the CIA’s man in Libya the whole time.

After all, Haftar is known to be a CIA asset who was kept in reserve by the U.S. for near two decades. Moreover, the operation of against Tripoli could have not been started without the U.S. consent.

A Guardian report dating back to 2014 sheds light on Haftar’s deep connections with the US:

“A career soldier, Haftar – grey-haired, hefty and thought to be 64 – supported Muammar Gaddafi in his 1969 coup that overthrew the monarch, King Idris. His reward was command of Libya’s abortive invasion of Chad in the 1980s, a chaotic war in which Haftar was captured and then disowned by Gaddafi.

Embittered, he fled to America, settling in Langley, Virginia, a stone’s throw from CIA headquarters. He has denied working with the CIA, but the agency certainly encouraged the main Libyan dissident group, the National Front for the Salvation of Libya, of which Haftar was chief of the military wing.”

The mysterious commander’s ongoing operation carried out by his self-styled Libyan National Army could have not been started without the U.S. green light, as the general is funded and armed by its close partners in the region.

Haftar visited Saudi Arabia on March 27 to meet with King Salman and Crown Prince Mohammad bin Salman, where he was offered support for his plans to take Tripoli. The Wall Street Journal has revealed that Saudi Arabia is financing Haftar’s campaign. “We were very generous with him,” the paper quoted an anonymous Saudi official as saying.

Moreover, the LNA commander had travelled to Cairo to meet with Egyptian President Abdel Fattah el-Sisi one day before his conversation with Trump. The Middle East Eye reports Sisi has a close relationship with Trump, and the language of Trump’s comments praising Haftar mirrored a statement issued by Egypt’s presidency on Sisi’s meeting with the Libyan.

It is likely that Saudi Arabia, Egypt and the UAE, and another partner of Haftar who is accused of smuggling arms to him, see the commander as a means of beating down the Muslim Brotherhood, which has a hostile relationship with the Wahhabi kingdoms and the incumbent Egyptian government.

Notably, Haftar enjoys the backing of Libya’s Wahhabi factions, who follow a harsh interpretation of Islam and have implemented strict Wahhabi law in some areas he has controlled.

As the U.S. uncovers its support for the Libyan general, western agencies have ignored the awkwardness of Trump’s move and have left the U.S. narrative unchallenged.

Moreover, some of them have made their narrative on Haftar more positive, perhaps to boost his legitimacy in the public eye. In the first place, the western agencies have failed to challenge Trump’s assertion that Haftar is seeking peace in the country.

They failed to ask how a would-be autocrat who has stood in the path of peace in Libya and undermined the UN’s efforts to bring the country’s warring factions together could “achieve peace and stability” in the war-stricken Arab country.

In their reports on the latest escalation in Libya, the western outlets simply point that Haftar is leading an operation to take Tripoli, but they prefer not to go into details.

The fact is the operation is part of Haftar’s fight for power, which he seeks to portray as a battle against “terrorism”.

The two-week offensive on Tripoli, which has been stopped on the city’s southern suburbs, has left at least 227 people dead, more than 1,125 injured and over 30,000 people displaced, according to the World Health Organization.

In the absence of any sign of a political solution or a ceasefire, Haftar’s military campaign has raised fears of a full-scale civil war in Libya.

The western outlets generally equalize Haftar and Libyan Prime Minister Fayez al-Sarraj, portraying them as two rivals in the conflict. This case is highly similar to Venezuela, where the U.S.-backed opposition leader Juan Guaidó is being displayed as a president rivalling President Nicolás Maduro.

Many outlets refuse to use negative adjectives to describe Haftar, referring to him simply as a “commander” or “general”.

As an example, the London-based Reuters called him a “Libyan commander” in its report on the Trump-Haftar phone call. This is while Reuters had described Haftar as a “renegade commander” in a 2014 story reporting the U.S. State Department was not condoning Haftar.

Another proof for the gullibility of the Western media was a Reuters report this Saturday quoting the LNA spokesman as telling the UAE-funded Sky News Arabia that Trump’s call to Haftar shows the U.S. believes in the role of the LNA in the war on terror.

Of note, the article uses the term “Libyan army” to refer to a loose patchwork of militant groups allied to Haftar.

Instead of questioning Trump and his dubious phone call with Haftar, the Reuters article is clearly echoing the U.S. narrative and aims to boost legitimacy of Haftar and his self-styled LNA.

Besides Reuters, some other western outlets also toed their government’s line and offered narratives sympathetic towards Haftar.

Washington Times described Haftar “a former asset of the CIA” leading a “Russian-backed” Libyan National Army, without explaining how it reached the conclusion Haftar is no longer a CIA asset.

Moreover, the Associared Press reffered to Haftar as a “Field Marshal”, a self- proclaimed title the former Libyan general likes very much.

The biased coverage of the Libya conflict by the western agencies is nothing new. These outlets have generally turned a blind eye on the disastrous consequences of the West’s role in toppling the long-time Libyan ruler Muammar Gaddafi.

The West’s intervention, happened under the guise of peace-building efforts, turned a once rich and stable country into a de-facto failed state.

The Libyan commander is the right man for the western powers to feed their oil appetites, so we should expect closer backing for Haftar by the western government and media.

The Libyan commander’s is hell bent on taking the whole country, and the strong U.S. endorsement would inject fresh blood into his army.

Perhaps the Libyan government is aware of the West’s double dealing, and that describes the reason behind their Monday move to cut security ties with France. Unfortunately, peace is unlikely to return to Libya any time soon.