On June 8, 1967, the USS Liberty, an unarmed intelligence ship reporting to the Joint Chiefs of Staff under the auspices of the National Security Agency, was ambushed by unmarked jet planes. Rockets and machine gun fire erupted, napalm hit the deck, and a torpedo blew a 40-foot hole in the starboard side of the vessel.

Lacking any means of defense, the sailors were powerless. In the end, 34 American sailors and translators lost their lives and another 174 were wounded — many for life. Israel confessed to the attack but called it an “accident” and a “mistake.” 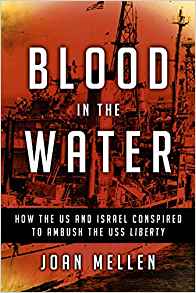 Blood in the Water: How the US and Israel Conspired to Ambush the USS Liberty by investigative writer Joan Mellen presents evidence suggesting complicity between US and Israeli intelligence in the attack on Liberty and the more than 50-year-long cover-up.

Using interviews with more than 40 survivors, knowledgeable political insiders and even some CIA officers who refused to be complicit in the cover-up, along with Soviet archives of the period, Mellen details the intensity and horror of the sustained attack and the “deliberate targeting of Liberty’s antennae and satellite dish, undermining any credibility that Israel’s aggression was not intentional.”

Through exhaustive research, Mellen aims to unearth answers to questions that have lingered for more than 50 years: What were the underlying motives for the attack? Was this a false flag operation conducted in the midst of the Six-Day War? Is it conceivable that Israel initiated the operation without a green light from the US?

For the sake of justice, truth and the murdered and surviving sailors, Blood in the Water is a must-read that shares compelling evidence of a horrifying truth.

Joan Mellen is the bestselling author of 24 books, including A Farewell to Justice, her biographical study of Jim Garrison’s New Orleans investigation into the Kennedy assassination. She has written for a variety of publications, including The New York Times, Los Angeles Times, Philadelphia Inquirer, and Baltimore Sun. Mellen was a professor of English and creative writing at Temple University in Philadelphia before retiring in 2018 after 50 years. She lives in Pennington, New Jersey.

For more information about the author, please visit JoanMellen.com.