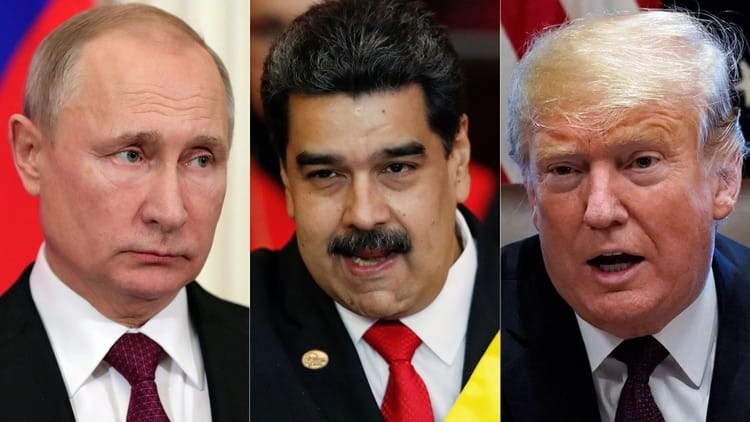 As Jim W. Dean usually puts it, you just can’t make this stuff up. The Daily Beast has just put out an article suggesting that Russia was behind the Venezuelan coup![1] That is just plain silly precisely because the United States army, as we have pointed out in the previous article, put it very clearly that the coup in Venezuela is fabricated in the United States.

In fact, the United States has been involved in covert activities in the region since Hugo Chávez.[2] Even back in 2018, the New York Times, of all places, wrote an article entitled, “Trump Administration Discussed Coup Plans With Rebel Venezuelan Officers.”[3] Last June, US journals such as Foreign Policy were beating the war drum, saying things like, “It’s Time for a Coup in Venezuela.”[4]

So where did the Daily Beast get the stupid idea that the Russians are behind the coup in Venezuela? Moreover, Russian Foreign Minister Sergey Lavrov has warned the United States to stop its covert activities in the region. Lavrov declared that there has been “an unprecedented campaign led by the US and aimed at toppling Venezuela’s legitimate government.” He moved on to say:

“Attempts to stage a violent upheaval in Caracas have nothing to do with democratic process, and only disrupt any prospects of political settlement.”[5]

Instead of conflict, chaos, colossal hoaxes and psychological warfare, Lavrov proposed “inclusive political dialogue” and peaceful resolutions. The United States, however, has a different worldview. Mike Pompeo declared: “he president has his full range of Article 2 authorities and I’m very confident that any action we took in Venezuela would be lawful.”[6]

Well, who gave the United States that right? Who told political whores and ethnic cleansers that they can move from one country to the next and destroy them at will?

Pompeo was just getting started. He moved on to say: “The Russians need to get out. Every country that is interfering with the Venezuelan people’s right to restore their own democracy needs to leave.”[7]

Once again this is very interesting because it has been declared that the Russians are implicated in the diabolical coup in Venezuela. Take your pick: if the Russians have to leave and stop supporting Maduro, then the Daily Beast has to be wrong. It just cannot be both at the same time and in the same respect.

Moreover, it is again the Russians who are trying to come up with a peaceful resolution in the region, not the United States. Lavrov has already planned to meet Maduro, where both individuals “will seek a solution to the bitter political crisis that is crippling the Latin American nation.”[8] Both parties will also create “options for international mediation efforts to facilitate dialogue between the government and the opposition.”[9]

Days earlier, Vladimir Putin told Trump that “Only Venezuelans themselves have the right to determine the future of their country.”[10]