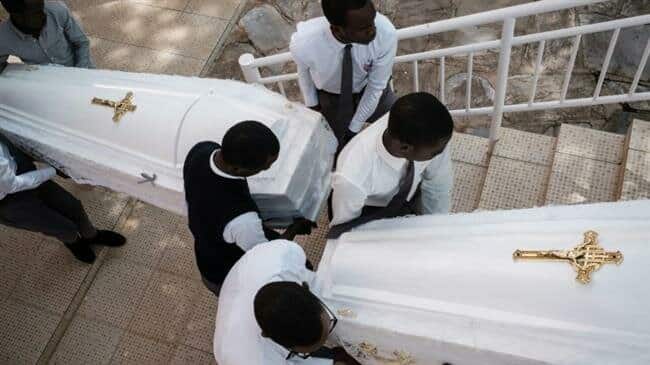 [ Editor’s Note: It is somewhat gratifying to see the ceremonies for these victims continuing. What is not nice is the continuing cover-up of the scale of the brutality, refocusing it on acceptable villains and steering it away from others.

I am not splitting hairs here. I feel that, despite what they are doing with the memorials, they are dishonoring the dead by trying to paper over the explosion of mass cruelty that swept across the land.

“Normal people” saw what was going on to give them cover to begin robbing and slaughtering their neighbors, knowing there would be no witnesses left to testify against them. They did it to profit materially. The “extremists and militias” were their cover.

And worse, we see in this story that victims were taken to the homes of their murderers, probably to be tortured into telling where they had buried their valuables, …”143 pits containing thousands of bone and clothing fragments were discovered beneath homes on the outskirts of Kigali.”

Exposing most of this horrible story took a long time, and part of the stalling was done to think up ways of how to cover what happened by wallpapering the degree of savagery reflecting on African blacks as a society.

A smaller scale version of this has gone on in the US over the epidemic of black on white rape, which mass media and all your mainline liberal groups will not touch with a ten-foot pole.

The federal statistics get reporting annually are completely ignored – worse than what was attempted in Rwanda. The small group that did publish the rape epidemic story here was immediately pounced on by MSM and the liberal groups as a racist hate group, when all they did was to publish the Federal stats with some analysis.

Why? They were being made an example of, as did happen in Rwanda when the initial slaughtering started. The initial militia slaughtering forced Tutsis to run for their lives, which left their homes as easy pickings, and the typical small valuables like money and jewelry they carried with them could be more efficiently stolen at “check points”. 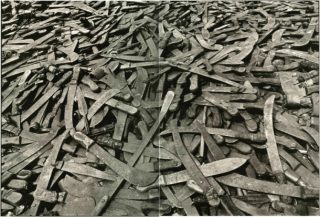 Huge numbers of female victims were brutally raped by these checkpoint monsters after they were robbed.

Yes, the Rwandan hardened criminal class was all involved, but “normal” folks jumped in when they saw it was “every man for himself” with no potential consequences. Machetes were the weapon of choice.

I salute those fighting in Rwanda to get every facet of the story out, but huge numbers of murderers are still walking around there and will die of old age before ever facing justice.

The story says nothing about the owners of the houses where pieces of these 85,000 victims were found being prosecuted. I have a problem with that. I see a cover up still continuing, a slick move to protect the murderers among them. Thus ends my rant for today… Jim W. Dean ] 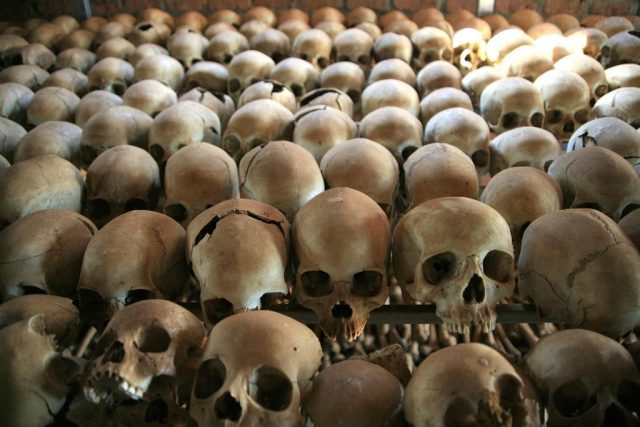 The remains of nearly 85,000 people murdered in Rwanda’s genocide were laid to rest Saturday in a sombre ceremony in Kigali, a quarter of a century after the slaughter.

Mourners sobbed as 81 white coffins containing the remains of 84,437 victims of the 1994 mass killings were buried at the Nyanza Genocide Memorial in the capital.

They were among more than 800,000 people, mostly Tutsis, massacred over 100 days by Hutu extremists and militia forces determined to eradicate the Tutsi minority in Rwanda.

Rwanda begins 100 days of mourning every April 7 — the day the genocide began. But this year has witnessed particular commemorations to mark the 25th anniversary.

“Commemorating the genocide against the Tutsi is every Rwandan’s responsibility — and so is giving them a decent burial,” said Justice Minister Johnston Busingye at the mass burial.

Some mourners broke down wailing as survivors spoke of the pain of losing their loved ones so brutally. A number were escorted from the funeral by ushers. Emanuel Nduwayezu said the discovery meant he finally had somewhere to come each April 7 and lay a wreath in memory of his murdered family.

“Right now I am very happy because I have buried my dad, my sister and her children, and my in-law. Twenty-five years have passed and I had not known where they were,” he told AFP.

“Everyday I was thinking and getting confused (about) where my dad was but now I found him and I have buried him.”

The remains of those interred on Saturday were only found early last year, when 143 pits containing thousands of bone and clothing fragments were discovered beneath homes on the outskirts of Kigali. Those exhumed for burial on Saturday came from just 43 such pits — leaving 100 more to go.

A painstaking effort was undertaken so that family members could identify their loved ones by their teeth, clothing and other markings. They join 11,000 other victims already laid to rest at the Nyanza Genocide Memorial.

Jean-Pierre Dusingizemungu, who heads Ibuka, an umbrella organization for genocide survivors, said a landlord from the area revealed the location of the graves only after he was threatened with arrest.

More pits were later found when a man, tasked in 1994 with dumping corpses, came forward with new information. Dusingizemungu said it was likely those living on the graves knew what lay beneath their homes.

“It is unfortunate that… these perpetrators, now free, never bothered to reveal to bereaved families the location of these grave sites, so they could get closure,” he said.

Clementine Ingabire was the sole survivor from her extended family of 23 who were massacred in the frenzy.

Seven of her relatives were identified from the pits, their remains scattered among the coffins. But at least they were granted a dignified burial, she said. Just seven at the time, Ingabire remains incredulous she made it out alive.

“Despite the fact that most people were very cruel, there were those who took risks to save others,” the 32-year-old said.

“I was saved by a Hutu woman who was a good friend to my mother. She saw me running and grabbed me… that’s how I survived.”

The ethnic bloodshed ended on July 4 when mainly Tutsi rebels entered Kigali, chasing the genocidal killers out of Rwanda. The rebel general was Paul Kagame, who became Rwanda’s president and has remained in power ever since.