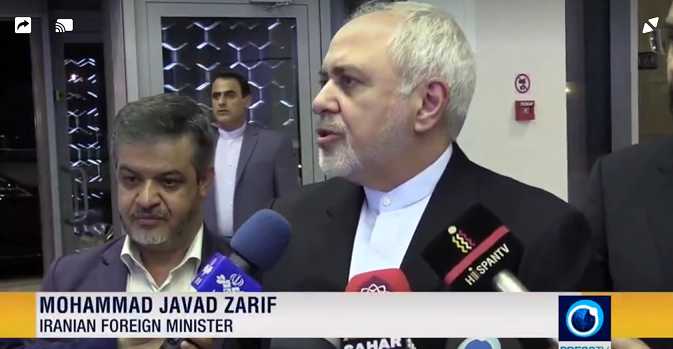 “Unfortunately, the European Union and other members of the international community were not capable of standing up to the US’ pressures,” Zarif said.

[ Editor’s Note: I did a Press TV news show on this today predicting that Iran’s response was likely to be measured, as it usually is. France spoofed the news on the story about how they might have to re-impose sanctions.

As Iran had given no indication of doing anything at that level, France was grabbing the headlines on the story, which worked. I think Zarif held this press conference to tone the anxiety down, as we are all going to know by tomorrow.

He went ahead and leaked that Iran was going to curtail doing extra voluntary things, which is about as measured as you can get. But he was not groveling. He took a swipe at his wimpy EU partners for their letting Trump stare them down.

Zarif was sending a message to the hesitant Europeans that, if they do not deliver the goods, then they will be the ones who have broken the agreement, along with US, leaving only Russia and China in the deal … Jim W. Dean ]

Iran says the countermeasures it has vowed to unveil Wednesday are all within the framework of the 2015 nuclear deal, and the country is not leaving the Joint Comprehensive Plan of Action (JCPOA).

The remarks were made by Foreign Minister Mohammad Javad Zarif upon his arrival in the Russian capital Moscow, where he plans to hold talks with his Russian counterpart on the Iran nuclear deal, among others.

Speaking to reporters on Tuesday night, he said Iran’s “strategic patience” with the US’ violations of the nuclear accord during the past year is over.

“Unfortunately, the European Union and other members of the international community were not capable of standing up to the US’ pressures,” Zarif said.

Therefore, he added, Iran has decided to stop implementing some of the JCPOA commitments it used to fulfill voluntarily “for now”.

The Iranian top diplomat said the right to stop implementing commitments partially or in full in case of violation by other parties has been preserved for Iran in the JCPOA.

So Iran is not doing anything against JCPOA now; rather, it is acting totally within the framework of Articles 26 and 36 of the deal, Zarif noted.

He described the move as “an opportunity for other parties to the deal to take required measures, and not just issue statements.”

Zarif also noted that the decision has been passed by the Supreme National Security Council, and its details will be announced on Wednesday.

PressTV-Iran to unveil countermeasures to US JCPOA exit

Iran will unveil new plans to counter the US withdrawal from the nuclear deal.

Iran said on Monday it seeks to unveil its countermeasures in response to the US’ 2018 withdraw from the landmark 2015 nuclear agreement signed between Tehran and six major world powers.

The plans will be announced on Wednesday, which marks the first anniversary of the US withdrawal from the nuclear deal.

US President Donald Trump withdrew Washington in May 2018 from the landmark Iran nuclear agreement, reached between Iran and the P5+1 group of countries — the US, Britain, France, Russia and China plus Germany — in July 2015. He also decided to re-impose unilateral sanctions against Tehran.

Sources at the French presidency said on Tuesday international sanctions could be re-imposed on Iran if it reneges on commitments under its nuclear deal.

A French presidential source said the European countries did not yet know precisely what steps Iran was now planning, but they could have to re-impose sanctions on Iran if those steps amount to reneging.

“We do not want Tehran to announce tomorrow actions that would violate the nuclear agreement, because in this case we Europeans would be obliged to re-impose sanctions as per the terms of the agreement,” the source said.

Almost a year since the US withdrawal from the JCPOA, Iran is still criticizing European countries for their inaction in the face of the US unilateral measures.

“We sent messages to Tehran to say that we were determined to implement the agreement, that we really wanted them to stay in this agreement even though we took into account the complexity of the situation and passed on the same messages to our American allies.”

A second French official later said that if Tehran failed to comply with the deal, the issue would be treated through a dispute mechanism under the accord itself, which could lead to the re-imposition of UN Security Council sanctions.

Iranian President Hassan Rouhani is expected to write letters to the countries still signed up to the deal – Britain, France and Germany as well as Russia and China – on Wednesday to give them details about plans to “diminish its commitments” under the deal, ISNA quoted a source as saying.

The letters would be handed over to the ambassadors of the five countries by Deputy Foreign Minister Seyyed Abbas Araqchi. A separate letter would also be written to EU Foreign Policy Chief Federica Mogherini.