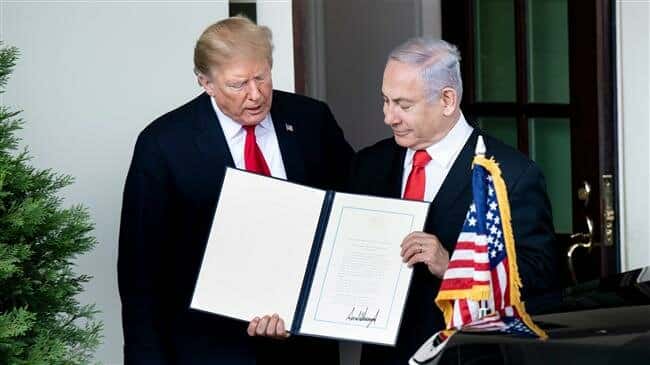 Israeli newspaper publishes terms of US ‘Deal of Century’ on Palestine

[ Editor’s Note: If this was such a great deal then why are the US-Israeli deal riggers including that all support that the Palestinians are currently getting will be terminated if they turn it down. Is that some new kind of deal sweetener?

And notice how for balance Kushner has in there that if Israel turns it down it gets cut off from US funding. Imagine that.

That does not sound like an executed in good faith without undue influence kind of deal to me, but the gun to the head kind the Zionists love so much. And then there is always issue of neither the PA or Hamas being involved in formulating the great deal. It was no Zio+2 deal, pardon the pun.

I remember a historical message that Ghengis Khan sent the fathers of a besieged city that he did not want to destroy and get no tax revenue. “Surrender the city and agree to the tax or I will kill all of your men, sell your children into slavery, and wear your women as robes.” I sense son Trump family DNA in that, at Pa Trump ran “Sport’n ladies”.

This “Deal of the Century” has been carefully orchestrated by taking all the key issues off the table like the Temple Mount and Al Quds, leaving the Palestinians no choice but to accept what is being rammed down their throats, of suffer the consequences.

There are criminal statutes for forcing someone to do something under duress. I have the feeling the the guilty party in this case will not be charged. Let me know what you think in the comments … Jim W. Dean ]

An Israeli Hebrew-language daily newspaper has published the main points of US President Donald Trump’s controversial proposal for peace between the Israelis and Palestinians, dubbed “the deal of the century.”

On Tuesday, Israel Hayom, which is close to Prime Minister Benjamin Netanyahu, published a leaked document circulated by the Israeli Foreign Ministry – the details of which are as follows:

A tripartite agreement will be signed between the Tel Aviv regime, the Ramallah-based Palestinian Authority (PA) as well as Hamas resistance movement, which controls the besieged and impoverished Gaza Strip, and subsequently a Palestinian state will be established that will be called “New Palestine.”

The “New Palestine” will be established in the occupied West Bank and Gaza, with the exception of Israeli settlements built on Palestinian lands in the West Bank.

The settlement blocs in the occupied West Bank, which are illegal under the international law and UN Security Council Resolution 2334, will remain under the Israeli regime’s control and will expand to reach out to other isolated settlements.

Moreover, the Israeli-occupied holy city of Jerusalem al-Quds will not be divided but is to be shared by Israel and the “New Palestine,” with the Israeli regime maintaining general control.

The present status of the holy sites will continue, and Jewish Israelis will not be allowed to buy Palestinian houses and vice versa.

Egypt will offer the new Palestinian state land to build an airport, factories and serve the commercial and agriculture sectors. Palestinians will not be permitted to live on this land. The borders of these lands and leasing price will be determined between the two parties through the mediation of supporting countries.

The United States, the European Union and the oil-rich Persian Gulf states will provide a budget of $30 billion over five years for national projects in the new Palestine. The US will pay 20% of the cost for such projects and the EU 10%, while Persian Gulf littoral states will fund 70%.

Additionally, the new Palestine will not be allowed to create an army. The only weapons it will be allowed to possess will be light weapons for the police.

A protection treaty would be signed between the Israeli regime and New Palestine under which it will pay Israel to defend it from foreign aggression. The cost of the payment must be determined in negotiations between the parties which would be mediated by the supporting states.

Hamas will deposit all its weapons, including personal arms, with the Egyptian authorities. Hamas members, including leaders, will continue to receive salaries from the supporting countries until the government is formed.

The border of the Gaza Strip, including the maritime border, will be open to the movement of goods and workers to Israel and Egypt, as the current situation of Judea and Samaria.

Within one year, democratic elections will be held and a government of New Palestine will be elected and every Palestinian citizen will be able to run for election. One year after the elections and establishment of the government, Palestinians held in Israeli prisons will be released gradually over the course of three years.

A highway connecting the West Bank and Gaza Strip will be established. China will pay 50% of its cost, while South Korea, Australia, Canada, the US and the EU will each pay 10%.

The Jordan Valley will remain under the Israeli control. The New Palestine will be given two new routes to Jordan with crossings under its control.

If Hamas and the Palestinian Authority refuse to sign the ‘deal of the century’, Washington will then cancel all financial support to the Palestinians and ensure that no country transfers funds to them.

If PA signed the deal but Hamas or Islamic Jihad refused, the leaders of these two movements will be considered responsible. In a new Israeli military aggression against the Gaza Strip, the US will back Israel in targeting these leaders.

If Israel refused to sign the deal, the US would cease all financial support to the Tel Aviv regime.

Trump’s so-called “peace plan” has been dismissed by Palestinian authorities ahead of its unveiling at the end of the holy fasting month of Ramadan and the formation of the new Israeli cabinet, most likely in June.

Speaking in the occupied West Bank city of Ramallah on April 16, Palestinian Prime Minister Mohammad Shtayyeh lashed out at Trump’s initiative, asserting that it was “born dead.”

Shtayyeh noted that negotiations with the US were useless in the wake of the country’s relocation of its embassy from Tel Aviv to Jerusalem al-Quds, which Palestinians consider the capital city of their future state.