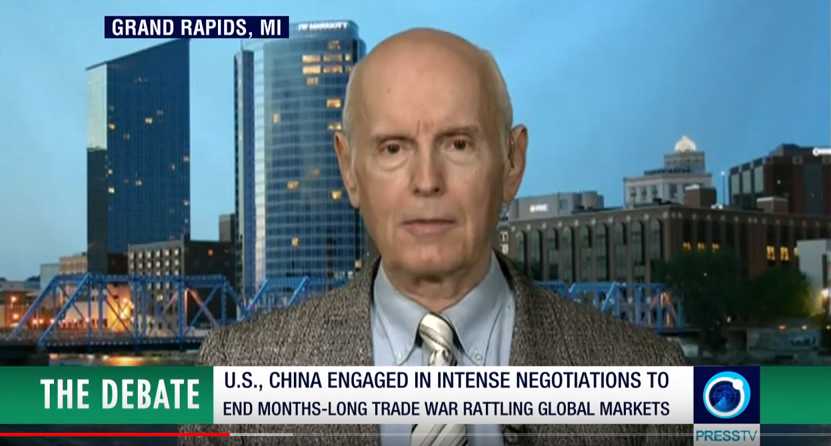 [ Editor’s Note: This was a timely Debate show to catch, with the US-China slugfest in full bloom. If the Chinese did really try to renegotiate something they had agreed to earlier, someone forgot to tell them that only Trump can pull stunts like that.

Strangely, the Trump new sanctions did not push the Chinese stockmarket down. What’s up wid dat? But lots of economists seem to agree that an ongoing US-China trade war would ripple around the world with lowering forecasts for economic expansions.

A US China-War will be a lose-lose for both, but centered around the major product exporters on both sides. Tons of US manufacturers have Chinese parts hard-wired into their supply chains. The tariffs will be passed onto them, as replacement suppliers will take a year or more to find, and may not be as reliable as the Chinese.

But I was able to get a new issue into this discussion that I have not seen mentioned before. With China having made huge commitments in capital to the New Silk Road, the BRICS development bank, while doing a major upgrade of its military, still needs the US trade surplus to keep its own expansion fired up.

Even people who don’t like Trump are fully behind his efforts to fix the huge trade imbalances with the EU and China. With the US national debt at $22 trillion and climbing at a trillion per year (that they will admit to), adding endless huge trade deficits just brings the day of the next big crash closer and closer.

All Presidents would prefer the crash came after they left office, as did Bush 43, the National Guard hero. I had always felt that Trump would want to string the Chinese along the Yellow Brick road and save doing the big deal when it would help him most with his 2020 election prospects. That’s how he rolls, as he feels he is the master of timing … JD ]

The United States has escalated its trade war with China, imposing tariffs on 200 billion dollars worth of Chinese exports hours after trade talks held in Washington failed to produce a breakthrough.

Tariffs on affected Chinese goods have risen from 10% to 25%. The U-S decision prompted a swift rebuke from Beijing. The Chinese government expressed “deep regret over the development” and promised to hit back.

The escalation came as high-level officials from both sides are trying to salvage a bilateral trade deal in Washington. What are the implications of the trade war these two countries? Which one has more chips on negotiation table?