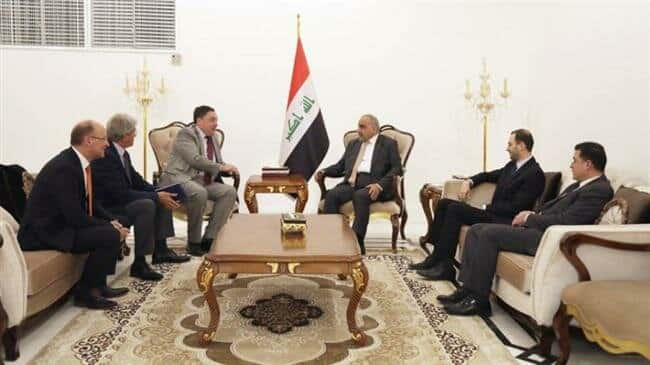 [ Editor’s Note: Instead of John McCain’s “Bomb, bomb Iran silliness”, we now have the light version of that with Pompeo’s bombed out wild attempt to turn Iraq on Iran, after blowing off a major meeting in Germany with Merkel which enraged the Germans and they will not forget. Pompeo could have gone to Iraq AFTER his Germany visit.

What did not make the news from the Pompep-Iraq talks, and I am sure it was discussed, was the growing joint security arrangements between Iraq, Iran and Syria, with the first item being opening the land bridge between Iraq and Syria at al-Bakumal.

The US currently has a cork in the bottle there with the SDF Kurds sitting on a lot of Syria’s oil and exporting it when Syria needs the revenue for  rebuilding the country. The US forces are strategically placed to be able to block much of those efforts by its being able to militarily interdict transportation by military means.

This a violation of a list of international laws and UN agreements, something that the US seems to not even consider in it foreign policy moves anymore. But as we have editorialized at VT, we have a gangster cabal really running the country now with Mr. Trump as its cooperative puppet.

We have also been editorializing that this gangster operational method was going to have serious long term effect on anyone having any trust in an agreement with the US after its record of Trump and his backers walking away from any agreement they don’t like.

Trump’s White house NSA people know that Iran is not going to “call Trump”. What for? It has North Korea as an example. Kim signaled early on that he was open to a step by step deescalation with sanctions removal.

But after all Trump’s theatrics he fell back on the deal killer idea that North Korea had to completely eliminate its nuclear program first, before the US “considered” removing sanctions. Kim would never agree to that.

So Trump just used the North Korea effort to do his usual grab the grand world stage tactic to keep the media on him all the time. I get the feeling sometimes he thinks he is the President of world media. Fortunately, North and South Koreans have been moving forward to improve relations … Jim W. Dean ]

Iraqi Prime Minister Adil Abdul-Mahdi says his country will not be part of the regime of US sanctions against Iran, and that is Baghdad’s clear and declared policy.

The premier made the remarks in a Thursday meeting with the ambassadors of the UK, Germany, and France to Baghdad.

“Iraq seeks to have relations and cooperation with all its neighbors, Arab countries, and all other states in the region and the world including the US and Iran,” he said.

“Iraq’s relations play a key role in reinforcing security and stability as well as the economic prosperity of the region and the world … and its balanced ties have positively affected its internal stability,” the Iraqi prime minister said

Abdul-Mahdi stressed that Iraq’s decision not to be part of the US’ sanctions against Iran is a pillar of this balanced policy.

Leader of the Iraq’s National Wisdom Movement, Ammar al-Hakim, also told US Assistant Secretary of State David Satterfield that the Arab country will not turn into a base for aggression against other countries.

“Iraq is trying to reinforce stability in the region and remain neutral and independent in its decisions, and thus does not allow its territory to be used for aggression against other states,” he said.

The comments came after US Secretary of State Mike Pompeo scrapped a visit to Germany on Tuesday to make an unannounced trip to Iraq, pressing Iraqi leaders about what he called the increased dangers to Americans there from Iran’s forces and allies.

Pompeo said he also used the four-hour visit to Iraq to discuss “big energy deals that can disconnect them from Iranian energy.”

Iraq’s Electricity Minister Luay al-Khateeb said Monday his country had brushed aside US demands that Baghdad stop gas and power imports from neighboring Iran. Khateeb did not say whether the Americans had made the demand after ending waivers for exports of crude oil from Iran this month.

US pressures on Iraq to wean itself off Iran has become a major point of conflict between Washington and Baghdad. A lightening rod in their spat is Iraq’s reliance on Iranian gas imports to generate electricity consumed daily in the country.

Washington is pressing Baghdad to source them from other countries or develop its own energy self-sufficiency. Iraqi leaders say the country cannot stop Iranian gas imports without serious electricity shortages.

Russia meanwhile urged the international community to continue trade with Iran despite US sanctions, the Foreign Ministry said Thursday.

In a statement published on its official website, the ministry condemned US withdrawal from the Iran nuclear deal as well as pressure tactics by Washington on other countries to stop trade with Iran.

The ministry stressed that Iran “scrupulously” carries out its obligations under the deal and its decision to suspend it partially is a last-ditch stand. Russia called all signatories of the deal, including Iran, to refrain from further actions to put the agreement under threat.

Turkish Foreign Minister Mevlut Cavusoglu has lashed out at the US sanctions, saying they do not just harm Iran, but are detrimental to the entire region. In its latest anti-Iran measure, US President Donald Trump issued an executive order to impose new sanctions on Iran to deny it of revenue from exports in the metal and mining sectors.

“Today’s action targets Iran’s revenue from the export of industrial metals — 10 percent of its export economy — and puts other nations on notice that allowing Iranian steel and other metals into your ports will no longer be tolerated,” Trump said in a statement Wednesday. “Tehran can expect further actions unless it fundamentally alters its conduct.”

Russian state nuclear corporation Rosatom announced that its project to build nuclear power units at Iran’s Bushehr is unaffected by current tensions surrounding US sanctions against Iran. Rosatom Director General Alexey Likhachov told RIA Novosti, “Rosatom has always met and is meeting all its obligations in all of its international projects.”

Russian Foreign Ministry also expressed its intention to continue cooperating with Iran, despite the US sanctions and Tehran’s decision to suspend some of its obligations under the multilateral Iran nuclear agreement.

“We would like to express our readiness to continue cooperate with Tehran within the framework of JCPOA [Joint Comprehensive Plan of Action], as well as in other bilateral projects,” the ministry said Thursday.