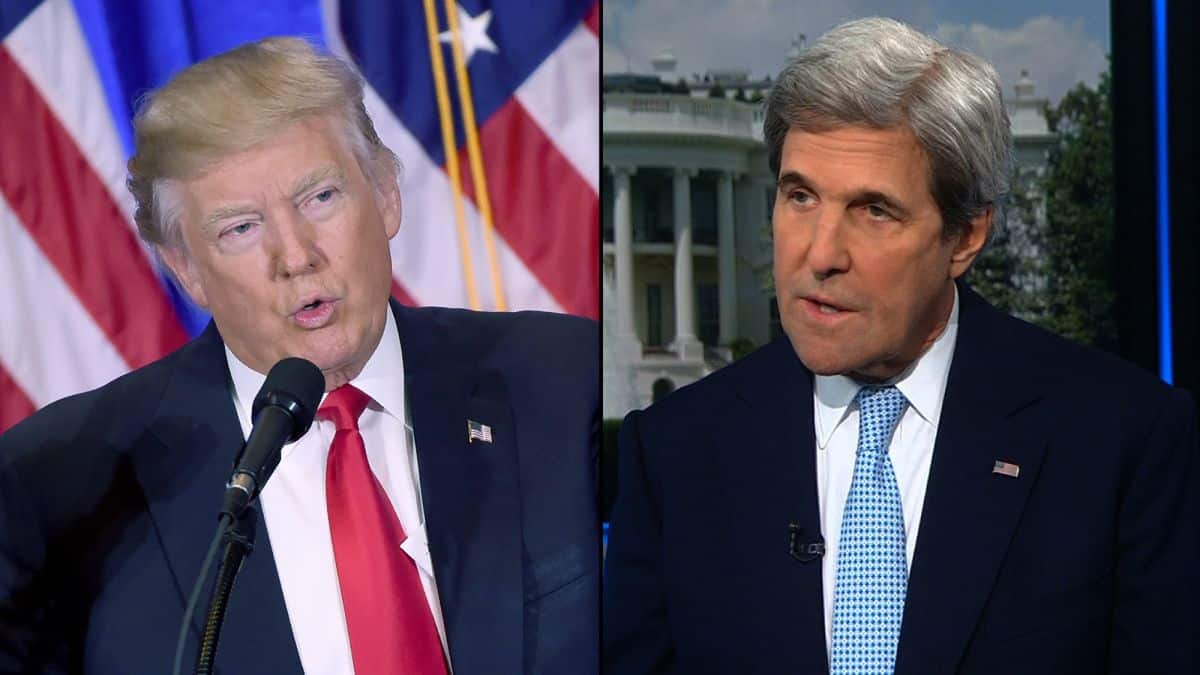 Donald Trump has recently made a fool of himself again by accusing former Secretary of State John Kerry of breaking US or international law by meeting with Iranian officials in order to salvage the nuclear deal. Trump risibly declared:

“You know John Kerry speaks to them a lot, and John Kerry tells them not to call. That’s a violation of the Logan Act, and frankly he should be prosecuted on that.”[1]

Trump has got to be kidding. Here is a man who has made diabolical deals with terrorist states such as Saudi Arabia, and now he is accusing Kerry of talking with Iranians in order to make peace and not war! How stupid can it get? Did he perpetually declare that he was going to put an end to perpetual wars in the Middle East?

He gets even more hilarious, as Trump went on to declare:

“But my people don’t want to do anything, only the Democrats do that kind of stuff. If it were the opposite way, they’d prosecute him under the Logan Act.”[2]

A spokesman for Kerry rightly said that Trump is “wrong about the facts, wrong about the law, and sadly he’s been wrong about how to use diplomacy to keep America safe. Secretary Kerry helped negotiate a nuclear agreement that worked to solve an intractable problem. The world supported it then and supports it still. We’d hope the President would focus on solving foreign policy problems for America instead of attacking his predecessors for theatre.”[3]

Kerry obviously dropped the political atomic bomb last summer when he said very specifically that by pulling out of the Iranian deal, then Trump and his administration “made it more likely that there will be conflict in the region because there are people there who would love to have the United States of America bomb Iran.”[4]

Kerry was just warming up. He moved on to say that both Saudi Arabia and Israel wanted the United States to attack Iran. This was true then and it is still true now. Both diabolical entities still want the US to attack Iran.[5] And this goes back all the way to the 2000s.

In 2003, Israeli Prime Minister Ariel Sharon made the declaration that the United States had already conquered Iraq, and it was time that the U.S. marched against Iran, Syria, and Libya.[6] The interesting thing is that Iran signed the Non-Proliferation Treaty, but Israel still hasn’t signed it to this very day; Iran allows inspections, Israel does not allow any inspections whatsoever. Israel does not even want to discuss the issue.[7]

When the Western world was reluctant to put Netanyahu’s plan with regard to Iran in practice, Netanyahu declared, “The world tells Israel ‘Wait, there is still time.’ And I say, ‘Wait for what? Wait until when?’ Those in the international community who refuse to put red lines before Iran don’t have a moral right to place a red light before Israel.”

In other words, he was indirectly saying that the West cannot tell him what to do. They have to follow his commands. This led one writer in the New Yorker to declare that Netanyahu is “cynical.”[8] Israeli political philosopher Avishai Margalit even declared that Netanyahu is guided by a “mythomaniac” ideology.[9]

So it is not farfetched to say that Israel in particular would love to see another debacle in Iran. Political whores in Washington has already been spicing things up. Neocon hawk and political prostitute John Bolton has recently had “a meeting at CIA headquarters” last month with the Trump administration in order to discuss Iran. As the Zionist media reported:

“Five former CIA operations officers and military officials said that in the past, such meetings have been held at CIA headquarters to brief top officials on highly sensitive covert actions, either the results of existing operations or options for new ones….

“The meeting came amid rising tensions between the U.S. and Iran, as the Trump administration piles pressure on Tehran’s economy through crippling sanctions. Days after it took place, Bolton, citing indications of an increased threat from Iran, announced the deployment of a U.S. aircraft carrier strike group and a bomber squadron to the Persian Gulf.”[10]

When asked about all these manipulations, Trump declared that he is not in the process of hurting Iran. He added: “But they should call, and if they do, we’re open to talk to them.”[11] Well, duh! Iran has been trying to extend its hands to US officials since the beginning of time,[12] and both Israel and Saudi Arabia has been a stumbling block. In fact, the United States worked with terrorist organizations like MEK in order to destabilize Iran.

Back in 1992, Netanyahu and Shimon Peres said that Iran was close to having nuclear bombs, and soon enough Zionist puppets such as Donald Rumsfeld marshaled the same arguments in 1998.[16] The international community may have had some reservations as to where Netanyahu was going, but they too had to face the wrath of Netanyahu, the foreign potentate.

Once that happened, the president of the United States had to call Netanyahu and beg for mercy, saying that he is in accord with Netanyahu with respect to Iran,[17] despite the fact that a war with Iran without the license of self-defense would be considered an international crime.

In 2007, Bush, under the guise of Neocon ideology, requested Congress that $400 million be allocated for covert operations in Iran. In 2006, the National Intelligence Estimate released a report saying that Iran halted its nuclear program, but the Bush administration, like always, tried to find some way to dodge the report. Instead, Bush and his administration, in the words of Admiral Fallon, were waiting for Iran to do something stupid. Iran never did. Then Cheney proposed a solution: Iran must be provoked into doing something stupid.[18]

So we have a problem here. Trump is the one who should be prosecuted because 1) he has already been in bed with terrorist states in the Middle East and 2) he continues to take his orders from a foreign potentate. He is not serving the United States of America, particularly when it comes to dealing with serious issues in the Middle East. He is serving Israel. It’s just that simple.