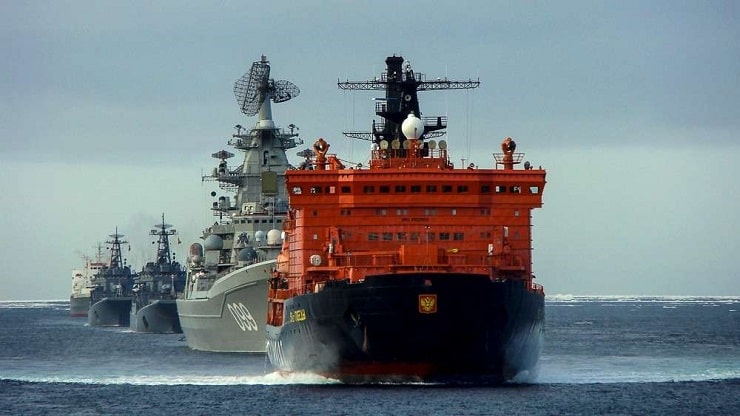 [ Editor’s Note: I had been planning to do a Russian Arctic story for a few months, which turned into a start-stop process. But finally, it was time to pull the research together, as the region is a sleeper geopolitical front, where not much is known or understood by the public about this top-of-the-world land.

The US, and laughingly so, even the British have been making statements about having to confront Russia in the Arctic, a strange, twisted terminology. Russia has never mentioned controlling the Arctic or disputing anyone else’s claims, as it has its hands full developing the resources in clearly Russian territory.

The Russians have made a huge long term investment, not only to increase their oil and gas reserves for themselves, but Eurasia’s growing consumer appetite, which the New Silk Road will stimulate even more.

And good neighbor China wants to turn the Russian Arctic energy tap on to have a safe, dependable overland pipeline delivery for oil and gas sources, so that US sanctions and blockades cannot disrupt it on a whim.

The huge mistake of the Trump-NeoCon unipolar jihad has been to crank up continuing sanctions threats, with energy being one of Donald’s favorites to pressure countries to do what Washington wishes. The Trump White House crew is being referred to as the Sanctionistas, due to their using that tool as the weapon for choice in foreign policy discipline, even for American allies.

VT had predicted that, as the Deep State actors got in control of more and more countries, they would use their economic muscle to achieve Deep State goals. The US was the big prize, as it had access to the economic muscle, despite trillion-dollar deficits, our military and Intel assets can twist all the arms that might need some “coming-to-Jesus” assistance. They either got on the Trump train or got sanctioned.

Current examples like the Venezuelan debacle and the manufactured Persian Gulf brinkmanship show the tools the hoodlums have in their hands to take what they want, one way or another.

Trump has led the world into the most dangerous situation we have seen, maybe since the US-Cuban crisis, with a mini-Cuban one on the table now, bootstrapped onto the Venezuelan crisis due to Cuba’s large medical force working in there now, that was miraculously turned into a “military force” overnight.

Long gone is the gold standard, where the U2 spy plane photo proof showed the Russian missiles in Cuba. Now we just say that the Cuban military is being used to oppress the Venezuelan people, and the US shows nothing as proof.

I expect this to get worse before it gets better… Jim W. Dean ]

The story of the Russian Arctic development has taken a back seat to the major geopolitical stories that grab the news headlines and are more suitable to one-sentence Twitter discussions. The Arctic is not. It is a cold mystery wrapped in a freezing enigma.

Yes I know that is an old line, but it fits. While the potential riches of the Arctic have been extensively written about, so have the unknowns of what the long term costs and future problems could be.

One of the biggest concerns is that while global warming will open up the sea lanes for more traffic through the Northern Sea Route (NSR), the melting of the permafrost could create a nightmare in maintaining infrastructure; and the earth is literally moving beneath it.

But Putin is committed to the Arctic development, as Russia stands to gain the most from it regardless of the cost and difficulties. While the US is burying its people under trillions in government debt on top of all that Americans personally owe, Russia is increasing the capital value of its national wealth and avoiding being baited into a shooting conflict with the West to waste it all.

The Arctic natural resources are of limited value unless they are extractable, deliverable and marketable at a competitive price, despite the large front end investment and harsh working conditions. Both capital and skilled talent are critical to success. Putin has knitted them both together.

Russia has shown leadership in challenging its people to fulfill their personal potential. While it has an educational system that is second to none, Russia does not want to be like the growing number of countries that have university graduates working at blue collar jobs and incomes.

You cannot maintain a cutting edge in technological human capital without the needed projects to provide the jobs at their skill level. The Arctic development is contributing to that need.

Russia technology for working in and under Arctic conditions is way ahead of everyone else because there are no short cuts. You have to work there to master the skills to develop and test the equipment needed and learn from mistakes.

Despite the current EU sanctions, Russia has continued to be a dependable supplier of gas for its European customers, as it always has. It was an aggressive pipeline builder to make sure it had a competitive edge with low delivery costs.

But Europe is now “in play”, as the US is looking to push Moscow out of that gas market and replace it with US exports to help cushion the negative balance of trade it has with the EU.

Offering key customers a two for one

Putin wants his energy customers to feel comfortable that Russia is not only a dependable long term provider of pipeline oil and gas, but also LNG for the overseas market. But that is not all.

He wants to offer some of his nearby customers like China, South Korea and Japan the ability to deliver exports to Europe via the Northern Sea Route.

Shipping time from the Far East to the main European ports can be reduced by 40% in some cases. And this route could be more easily secured from the growing “Sanctionista” movement that some countries find useful to tip balance of trade deficits back into their favor, as the US has done.

This brings us to the military aspects being mentioned in the West, particularly in Britain for example, as part of its bogeyman propaganda against Russia’s “militarization” of the Arctic, which is another fake news item.

Sure, Russia has been rebuilding some of its Soviet-era bases, but these have multiple purposes, the first of which is to provide security for transiting cargo traffic and also for dealing with the kinds of emergency situations that can occur in that region due to the harsh conditions, such as a ship in distress.

And yes, Russia does have defensive weapons posted in the region, as it has a long border to protect, not the least of which could be against incoming missiles. The military equipment there is being tested for its durability under the harsh conditions where 50 degrees below zero is not unusual.

What is the West doing for its Arctic planning?

The short answer is basically nothing. Some token military training has taken place by some countries like Canada, known for its hardly souls in the north country who freely admitted that the Arctic cold was beyond anything they had imagined.

And I did not use the term “token” to demean their military people, but their whole effort starting with no Western country having the needed modern icebreakers to secure and maintain any credible shipping supply lines.

Even the US Coast Guard does not have a single icebreaker ship at sea, and only one planned purchase. The Brits have trouble keeping their warm water ships at sea with enough sailors to run them, including those needed to tow them back to port.

Russia is a decade ahead of everyone, with the largest current fleet of icebreakers, about 45. The icebreaker that the US Coast Guard is looking to order is estimated at a design cost of $700 million. Modern Arctic tankers are also a must, with Russia’s Rosneft oil and gas company having an order for 25 vessels from the Zvezda shipyard.

The huge $27 billion Yamal LNG plant was finished a year early because Russia’s fleet of nuclear icebreakers was able to keep construction material and equipment flowing to the site smoothly.

With the US and NATO having over an 11 to 1 superiority in military spending to the Russian Federation, the West’s air power advantage in terms of combat planes is much higher.

NATO also has a current tactical advantage of having moved forces up to the Russian border, and the US Navy is able to stand off Russia and China in international waters with a large inventory of nuclear-armed intermediate range missiles.

But the West does not have a missile shield in the Arctic, not yet anyway. A key part of Russia’s defensive strategy, to offset US first strike weapons being moved up to Russia’s border, is to have a retaliatory capacity that cannot be defeated.

It can launch its hypersonic nuclear glide missiles to fly over the South Pole if needed, where there is no US missile defense at this time, or none planned. And it could fire over the North Pole, as could the US.

Hence, it is not an act of aggression to see Russian air defense military in the Arctic any more than it is to see the US moving military assets to the Aleutian Islands and northern Alaska.

This is the world we live in, the new Cold War, with Mr. Threat and Treaty-breaker Donald Trump at the helm of the US military. He recently posed that he would try to squeeze both Russia and China into a new strategic weapons agreement, or the US would outspend and out deploy them with advanced weapons.

But what the former poor student at school still does not grasp is that the days of having a technological edge on Russia and China together are coming to an end. Where the US had a huge numerical superiority, that forced Russia and China to invest heavily and fast into their military technology to have a counter balance.

Once they have it they have a much lower per unit cost or production, which is needed as they have a vast area and population to defend.Remember that the Soviet Union had a mutually assured destruction capability back when it had a failing economy. It is light years ahead of those days now.

The top-tier major powers always have defense/offense technologies that have never made public. Even Iran demonstrated this when it took control of and landed one of the US top drones, giving up the secrecy of having that electronic warfare capability so it could reverse engineer that drone within a year.

Donald Rumsfeld once put it well when he said, “You don’t know what you don’t know,” and that is what gives commanders many sleepless nights.