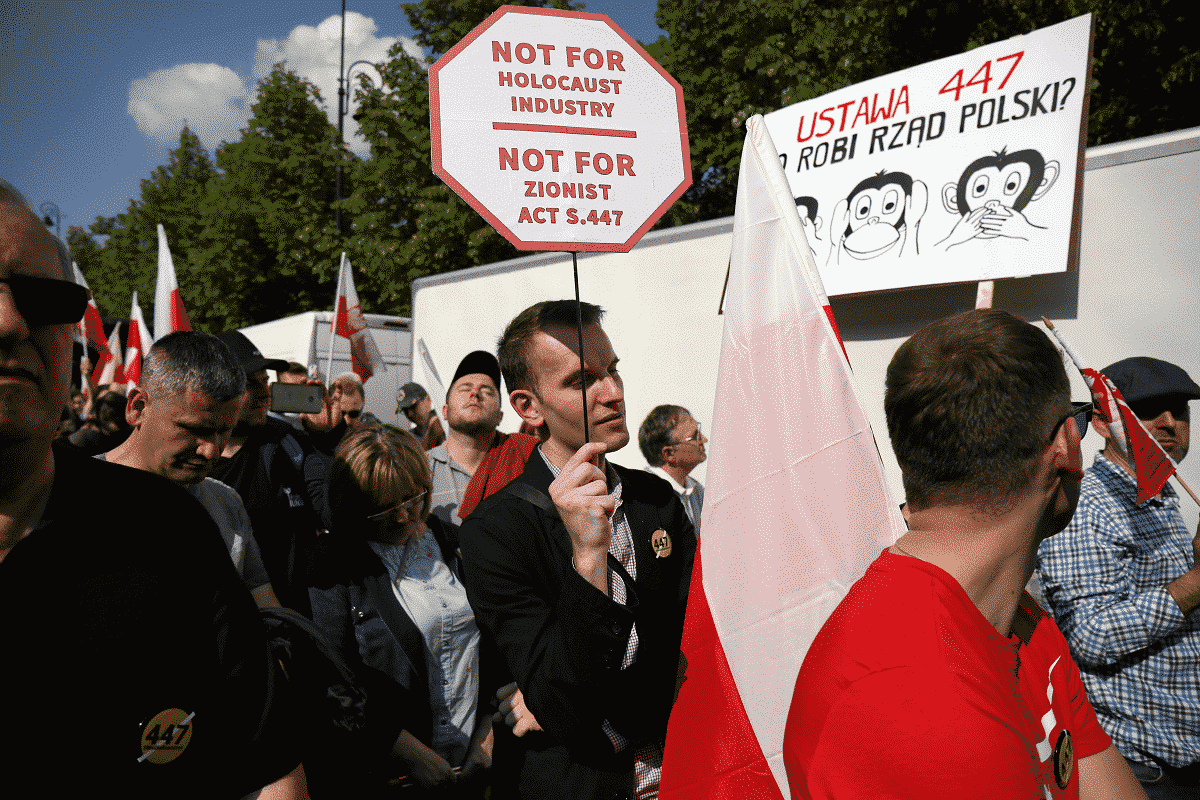 
The United States has recently pressured Poland to pay compensation to Jews who allegedly lost property during “the Holocaust.” The Poles responded by basically saying that they ain’t gonna take it. As Russia Today puts it:

“Nationalist and far-right backers gathered at Polish Prime Minister Mateusz Morawiecki’s office on Saturday, where they rallied against US legislation S. 447, also known as the Justice for Uncompensated Survivors Today (JUST) Act. It was signed into law last year and requires the State Department to monitor the restitution of property seized during the Holocaust in dozens of countries.”[1]

The Poles had every reason to protest. RT continues to report:

“Morawiecki expressed support for the protesters, arguing that it was Poles who deserve to be compensated for Nazi crimes… People were seen carrying banners with slogans such as ‘Poland has no obligations’ and shouting, ‘This is Poland, not Polin,’ using the Hebrew word for Poland.

“Opponents of a compensation law insist that it would inflict serious damage on the country’s economy, and claim that Poland itself has never been adequately compensated by Germany for Nazi crimes. Far-right groups claim that Act 447 could force Poland to pay upwards of US$300 billion in compensation.”[2]

This is absolutely true. And if any reader thinks that the Poles are anti-Semites, then pick up a copy of Norman Finkelstein’s meticulously lucid study, The Holocaust Industry: Reflections on the Exploitation of Jewish Suffering. We all know by now that this “Holocaust” stuff has been used as an ideological weapon to subjugate Germans, Poles, and other people who even suffered during World War II. Finkelstein was the one who exposed this racket scholarly.

Finkelstein’s The Holocaust Industry was quickly denounced as a work of an anti-Semite, despite the fact that Finkelstein lost his grandparents in Nazi Germany. Finkelstein was teaching at Hunter College at the time and lost his job right after the publication of the book.

Many skeptics questioned his motives—and they should have, since serious scholarship dictates that a person’s motive should also be put under the light of reason and intellectual honesty. Yet no one has put forward a reasonable counterargument to Finkelstein’s thesis. Haaretz told us that the Jewish establishment thought that killing the book “with kindness was the best strategy.”[3]

Anti-Semitism, distortion of facts, among other words, were applied to describe the book by a number of Jewish writers.[4] Israel Guttman, “formerly the chief historian of Yad Vashem,” called the book an “anti-Semitic lampoon.”[5]

Yet when those people are challenged to back up such charges from assertions made in the book itself, and to refute the documented claims Finkelstein made, none could produce evidentiary foundation. As some have stated, it is not a matter of facts that is the issue, but the style that Finkelstein uses in the book.

Michael Brenner, a professor of Jewish history at the University of Munich, Germany, somewhat agrees with Finkelstein’s work, and at the same time diverges from him because, well, of his style:

“There is a nucleus of justified claims in the book, including the stuff about the compensation issue, the lack of transparency of the Jewish organizations that are handling the matter, and the Holocaust obsession of the American Jewish establishment. Nevertheless, in order to gain a proper understanding of these claims, Novick’s book was definitely enough. Finkelstein’s style only makes it harder to accept these claims.”[6]

Ten years later, some Jewish organizations continued to prove that Finkelstein was right. The Nadav Haetzni’s law firm, “which provides legal advice to the state-owned Company for Restitution of Holocaust Victims Assets,” was one of those organizations. The law firm, Haaretz tells us, “has earned millions of shekels in fees over the last three years.”

That’s not all, the firm “took in NIS 1.2 million in fees in 2008 and over NIS 1 million in 2009; the figure for 2007 was similar. That sum is on top of the hundreds of thousands of shekels the company paid to other law firms during those years.”[7]

The same year, The Jewish Week told us,

“The Claims Conference fired three employees last week who allegedly approved more than 100 fraudulent Holocaust-era claims — filed primarily by Russians now living in Brooklyn — that bilked the German government out of more than $350,000, The Jewish Week has learned.”[8]

Semen Domnister, a Claims Conference Leader worker and ringleader, was found guilty of “falsified applications for German funds.”[9] 28 other people were found guilty as well.

The FBI, the Jerusalem Post told us in 2010, “was investigating fraudulent misappropriation of at least $7 million, possibly substantially more, over the past decade from the Article 2 Fund created in 1995 by the German government to provide quarterly pensions to eligible Holocaust survivors.”[10]

The Claims Conference, in the end, was responsible for a massive fraud, and Jewish hoaxers were amassing a whopping $57 million from it.[11] One German observer who was at the trial simply was shocked to see how the organization was taking “money collected as taxes from German citizens” and how the money “went to individuals who were not Holocaust survivors.”[12]

The Claims Conference has been responsible for pressing the German government over compensation claims made by alleged victims of the Holocaust. This is very bizarre for obvious reasons.

What kind of compensation did the Russian peasants receive after the Bolshevik regime wiped out more than twenty million people[13]—a figure that is far greater than the figure that is attributed to the Jews killed in Nazi Germany? Within less than three years, the Bolsheviks were responsible for starving more than six million people.[14] No compensation was allocated to their children, let alone their generational children. (Yet the Jerusalem Post declared that in 2010 Benjamin Netanyahu was considering designs for a Red Army memorial![15])

You see, Jewish historian Tim Cole of the University of Bristol was right after all:

“At the end of the twentieth century, the ‘Holocaust’ is being bought and sold…In short, ‘Shoah [Hebrew word for Holocaust] business’ is big business.”[20]

Again, do the Poles have the right to resist the Holocaust Industry? The answer is a resounding yes.