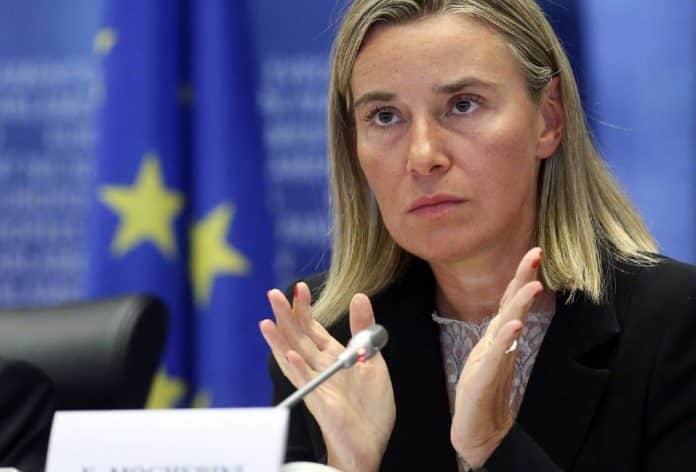 EU, US face off over Iran as ministers meet in Brussels

[ Editor’s Note: The EU put a one-two punch on Pompeo’s nose this morning, with Mogherini doing a jab and then having her assistant Tocci hammer Pompeo over the head.

He surprisingly did a last-minute cancellation to meet with Putin for this Brussel’s stop, but might get stiffed with Mogherini not even meeting with him. What’s up wid’ dat?

But Mogherini did play another card today in the language she used about the EU doing “as much as we can” to support the JCPOA. I don’t remember that kind of language being in a deal of this importance. I don’t think anyone would have accepted Iran takin g a position like that, that it would “try” to restrain its nuclear program as much as it could.

Mogherini’s adviser, Nathalie Tocci, really did the heavy lifting, stating that the US canceling the oil waivers would make it impossible for Iran to stay in the deal. That indicates that the EU is not planning a work-around for those imports via its INTEX payment myth.

Tocci went further to state that the US goal is regime change in Iran, which is not working, and further…that the US could start a war with Iran, but can it win?

She used Iraq as an example, that if the US could not win in Iraq, a smaller and weaker country, how could it win against Iran. This is one hell of a statement for an EU diplomat, at this time.

And there was no more talk of the EU renewing sanctions if Iran leaves the JCPOA, which seems to indicate that Iran did not kill the deal, the US did, so why punish Iran. All this greeted Pompeo this morning. We will be waiting for his response, if he has one … Jim W. Dean ]

EU foreign policy chief Federica Mogherini says the European Union fully supports the international nuclear accord with Iran after Tehran decided to scale down its commitments in response to US sanctions.

“We will continue to support it as much as we can with all our instruments and all our political will,” Mogherini said before meeting foreign ministers of Britain, France and Germany in Brussels Monday.

Her announcement appeared aimed at the US whose Secretary of State Mike Pompeo was expected to show up in Brussels later in the day to talk with EU officials about Iran.

The United States has unilaterally abandoned the nuclear agreement and been trying to wreck the accord through a series of coercive measures which forced Tehran this month to recant some of its commitments.

Mogherini said she was informed during the night of Pompeo’s arrival in Brussels, as she urged efforts to avoid any further escalation over the issue. The top EU diplomat also said she was not sure if a meeting with the US secretary of state could be in the works.

“We will be here all day with a busy agenda. So we will see during the day how and if will manage to arrange a meeting. He’s always welcome obviously, but there are no precise plans at the moment,” Mogherini said.

According to a US State Department official, Pompeo canceled his planned visit to Moscow to meet Russia’s President Vladimir Putin and Foreign Minister Sergei Lavrov on Tuesday to discuss Iran and headed instead to Brussels.

Reports suggested that the US diplomat was seeking to pressure the Europeans to respond to Iran’s announcement to forgo certain commitments of the Joint Comprehensive Plan of Action (JCPOA).

The US has ratcheted up sanctions against Iran this month, revoking waivers that had permitted some countries to continue buying Iranian oil.

It has also sent an aircraft carrier task force, bombers and other assets into the region in a further escalation, which Iranian officials have described as “psychological warfare”.

Meanwhile, UK Foreign Secretary Jeremy Hunt, in Brussels Monday alongside his French and German counterparts, warned of the risks of an unintended conflict between the United States and Iran.

“We are very worried about the risk of a conflict happening by accident with an escalation that is unintended,” Hunt told reporters.

On May 8, Iran announced that it would stop exporting excess uranium and heavy water, setting a 60-day deadline for the five remaining parties to the deal to take practical measures toward ensuring Iran’s interests in the face of the US sanctions.

Mogherini and the E3 foreign ministers released a joint statement, rejecting the deadline, while reiterating their commitment to the implementation of the nuclear deal.

Iranian Foreign Minister Mohammad Javad Zarif criticized the EU statement, saying the bloc was demanding that Tehran unilaterally abide by a multilateral accord, which has already been abrogated by Washington.

Iran has warned that it has put a “step-by-step” withdrawal from the JCPOA on its agenda.

“We have not left the JCPOA so far, but we have put such a move on our agenda and that would happen step-by-step,” Deputy Foreign Minister for Political Affairs Abbas Araqchi said Wednesday.

Nathalie Tocci, the special adviser to Mogherini, acknowledged that US pressure was making Iran’s compliance with the JCPOA impossible. In an interview with CBC News, Tocci said the EU and the US have fundamentally different objectives in their dealings with Iran.

“What is very clear is the fact that, in fact, some of the non-renewal of the sanctions waivers of the United States actually make it impossible for Iran to comply with the JCPOA,” she said.

The diplomat said the EU’s objective is to contain Iran’s nuclear program, while the Trump administration’s aim is a regime collapse in Iran.

“Now as for the question, ‘Is the US strategy aimed at a regime collapse in Iran actually delivering?’ Well, frankly speaking, I don’t see an Iranian regime on the verge of collapse,” she said.

Tocci further dismissed the possibility of a military confrontation between the US and Iran.