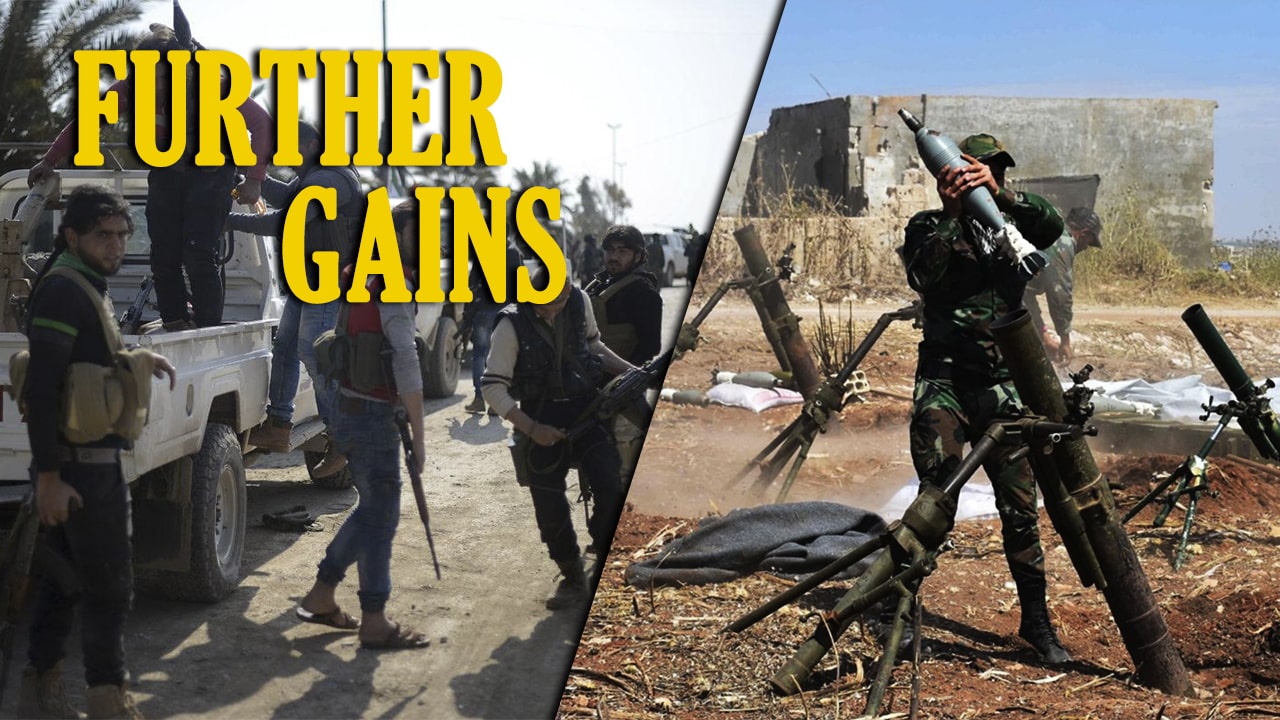 Pro-government forces are developing their steady advance on positions of Hayat Tahrir al-Sham and other radical militant groups in northwestern Hama.

After a series of heavy clashes, the Syrian Arab Army (SAA), the Tiger Forces and the National Defense Forces (NDF) established control of the villages of Hawijat Sallah, Jamasiyah, Shari’ah, Bab Al-Taqa and several nearby points.

The advance came amid a high number of Syrian and Russian airstrikes that targeted terror infrastructure in the provinces of Hama and Idlib. Another factor, which contributed to this tactical success is the participation of Russian military advisers.

Hayat Tahrir al-Sham-led forces carried out several counter-attacks employing their artillery, anti-tank guided missiles and suicide bombers, but failed to push the SAA, the NDF and the Tiger Forces back from the recently captured positions.

According to pro-government sources, a total of 40 militants were killed in the clashes. Pro-militant sources continued claiming that pro-government forces had suffered large casualties, but there are little evidence to confirm the provided numbers.

In northern Aleppo, the Turkish-backed militant group, the Hamza Division, shelled the government-held towns of Nubl and al-Zahraa from the occupied region of Afrin. The group’s media wing claimed that these attacks were a response to the SAA advance in northwestern Hama.

At the same time, Hayat Tahrir al-Sham and multiple groups from the Turkish-backed National Front for Liberation formed a joint operations room to coordinate their efforts against the SAA in northwestern Hama and southern Idlib.

These developments confirm that the separation of the so-called moderate opposition from the terrorist in northwestern Syria has once again failed and these groups continue to cooperate and coordinate their efforts against the Damascus government.

The US-led coalition and its Syrian proxies conducted night live drills near the al-Tanaf garrison on May 11. The drills involved the US High Mobility Artillery Rocket System deployed in the area. Such drills were repeatedly conducted in the area during the last two months. They serve as a signal that the US is not going to withdraw its forces, which block the movement along the international Damascus-Baghdad highway.

Russian and Syrian efforts to evacuate the nearby Rukban refugee camp achieved limited results only evacuating around 8,000 civilians only from the area of the humanitarian catastrophe created as a result of the US occupation of this chunk of southeastern Syria.