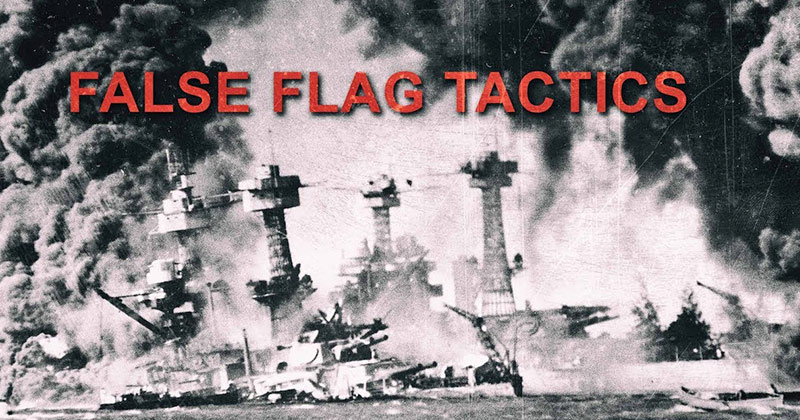 For a lively exchange on this topic, check out my Press TV Debate with ultra-Zionist Lee Kaplan. –Kevin Barrett, Veterans Today Editor

May 13, 2019. All the marks of a big false flag with the story of four tankers sabotaged in Fujairah today – with big potential for a big war – a big lie like Bush’s WMD and a bigger war than Iraq.

Did you notice – Wasn’t it cleverly done? Nice how no oil or blood was spilt, and the tankers were Saudi?

Key point to remember: To pull off these four sabotages so neatly made to order, with big propaganda value but no casualties or oil spills, would require close cooperation with the ship owners.

Is that why they are Saudi, UAE and Norwegian ships?

It’s not pure chance. None of those three countries owns more than one percent of the world’s oil tanker fleet. What is 1% times 1%, four times? It’s one millionth of one percent.

So the sabotage of these particular four tankers is a million miles from random. By an astronomical margin, the choice was targeted and intentional.

So what was the intention is and whose is it? Does Iran want to provoke a war against itself? Not likely!

Would Saudi Arabia or Israel like to see a war between the US and Iran? Definitely.

Plus, all three countries, and the US, are oil producers,  and will benefit from the spike in oil prices.

As for the US, they couldn’t wait to break the news. There were the first to announce the coordinates of the attacks. Yet “satellite imagery of the area, which is regularly examined by TankerTrackers.com, revealed no fires and no evidence of explosions,” according to Forbes. [1]

Trump’s remarks made it sound like it was a lesson to the Iranians. See how easy it is to make an excuse for a war? How much trouble a little damage to a few tankers can make for you? So don’t brag too much about sinking our aircraft carriers — where did that get Japan? And the world better get in line behind my Iran sanctions!

Asked directly about the apparent attacks in the Sea of Oman, Trump again said, “We’ll see what happens with Iran… it’s gonna be a bad problem for Iran if something happens, I can tell you that. They’re not going to be happy.”

When journalists requested clarification, Trump said, “You can figure it out yourself. They know what I mean.” [2]

Thank you, Donald. We figured it out. It was a message to Iran. And you carry a big stick.

The UAE is well known for its participation in the Saudi war on Yemen. Little known is the Norwegian role in discovering huge oil reserves in Syria, a few years before the war was launched on Syria in 2011.[3] Norway is a founding member of NATO. As such it has a Gladio network with false flag capabilities, suspected of the 2011 Breivik massacre. All members in good standing of the club. [4]

I did a little research on the number of ships in the world’s tanker fleet to figure out how odd the four targets were. According to statista.com, there are 7500 oil tankers worldwide. For the Saudis, Business Insider reported they should be up to 60 ships by now, or 0.8% of the world total. They are big, big buddies with Trump and with swords drawn for Iran.

For the UAE, I could only find a tenth of that, six tankers owned by Abu Dhabi, the wealthiest of the United Arab Emirates. The sabotage occurred in their back yard. Norway’s richest billionaire John Fredriksen owns Frontline AB, with 82 tankers.[5]

I may have missed a few, but it’s still clear these four boats were in safe hands for a nice clean false flag op, which some media reports are calling “sabotage” in quotation marks. Maybe they call it that so they can collect the insurance money too. And false flags always attempt to damage more than the visible target, they try to sabotage world peace.

Conclusion: the ownership of these vessels points to an inside job. It’s the same reason they needed the Zionist Jew Larry Silverstein to lease the World Trade Center just before 9/11. To pull off a false flag, the owner needs to be in on the scheme.

The great majority of the world’s 7500-strong oil tanker fleet is owned by Japan, Greece, China and Singapore.[6] None of them would gain from a war with Iran, and they do not participate with the CIA and Mossad in their Mideast false flags and other black ops.

So, right on cue, “cue-riously” enough,  Saudi tankers were sabotaged — or self-sabotaged? Why were the 66 Saudi and UAE tubs hit three times, while the rest of the world’s 7,500 tankers went unscathed?

This incident should also be viewed in context with the sabotage, explosion and destruction of a Turkish oil tanker that was delivering Iranian oil to Syria in the port of Latakia. The tanker sank with all hands on board, leaving a huge oil slick – but in the Western media, the incident sank out of view and never surfaced. [7] The usual double standard.

Meyssan explains that these acts of sabotage are part of a US strategy to dominate the flow of oil worldwide using sanctions, threats, and violence. Trump’s plan is to block Iran, Venezuela and Syria from selling their oil, to keep prices high enough for the US to sell its high-cost shale oil. Russia can not interfere, as it also needs high oil prices.

[3] In Before Our Very Eyes, Fake Wars and Big Lies, From 9/11 to Donald Trump, by Thierry Meyssan, 2019, p. 51. Two Norwegian oil companies had a contract to explore for oil in Syria a few years before the war. They uncovered enormous reserves at least as rich as Qatar’s, but kept this secret from Damascus. One of the companies was sold to a French company which was in turn acquired by the US firm Schlumberger. So Norway, France and the US knew the secret, and have an interest to exploit it by overthrowing Assad. A war on Iran might lead to the fall of  Syria and exploitation of its oil by Western companies, with possible rewards for Norway, too. In fact, during the Syria war, ISIS trucked most of Syria’s oil production to Turkey for transshipment to Israel, as I noted in ISIS IS U.S., 2016, p. 120.

[5] Abu Dhabi National Oil Company website https://www.adnoc.ae/en/adnoc-logistics-and-services/our-fleet/shipping-fleet . According to Business Insider in 2016, the Saudis had 45 tankers then and would have 60 by 2018. https://www.businessinsider.com/saudi-arabia-to-create-worlds-largest-oil-fleet-2016-7

But the worldwide tanker fleet is about 7500, according to https://www.statista.com/statistics/264024/number-of-merchant-ships-worldwide-by-type/

Southfront reports that Iran is calling the sabotage a false flag op. Iran said they had predicted “suspicious sabotage acts” and “deviating moves” by “a third party” (Israel?) “to increase tensions in the region.”
It turns out that the UAE and Norwegian vessels were not even tankers, they were smaller ships, reflecting the smaller commitment on the part of those nations. They seem to be low-cost window dressing for the Saudis as principals so as not to look so obvious.
“Al Jazeera cited an anonymous US official who claimed that the US military was investigating the alleged sabotage on the boats,” which would be standard procedure to manage the false flag narrative.
“Conveniently, the US Maritime Administration on May 11th, issued a warning that Iran may target US forces in the Persian Gulf and Middle East.” Such fortuitous foresight and prompting is typical of false flag ops.
–SouthFront

Newsmax published satellite photos showing little or no damage to the tankers, not surprising as it was at the waterline and wouldn’t be visible from directly overhead.