In Syria the chemical attacks invented by the White Helmets NGO, run by a former British military secret agent and complicit in many operations by Al Nusra’s militia, descendants of Al Qaeda, were even broadcast by a CNN video later denied by the BBC and justified the rain of a hundred Tomahawk missiles around Aleppo.

In Venezuela, more than 150 cyber attacks have taken place from the US to the electricity grid (and even physical to water with oil infiltration in drinking water pipes) but the Western media have completely ignored them or reported incidents according to the thesis of Juan Guaidò coup, aspirant president in Caracas with the support of Washington.

Now that a Norwegian oil tanker finds himself with a leak in the hull, very small so as not to jeopardize its buoyancy but only to prevent long-range navigation, European journalists immediately point the finger at Iran exactly as they did with the Syrian government of Bashar Al Assad for Douma’s chemical attack turned out to be a resounding fake news.

MYSTERIOUS SABOTAGES IN THE PERSIAN GULF

“Iran hypothesizes that oil attacks are orchestrated to trigger the conflict,” the Al Jazeera network, based in Qatar, writes clearly. reasons to justify the Shiite Muslim antagonists of Tehran but the report by Zaheena Rasheed highlights a single certainty: a photo of a leak in the stern of the Norwegian tanker Andrea Victory was spread but no image of the alleged damage suffered by three other ships cistern of Saudi Arabia and United Arab Emirates. 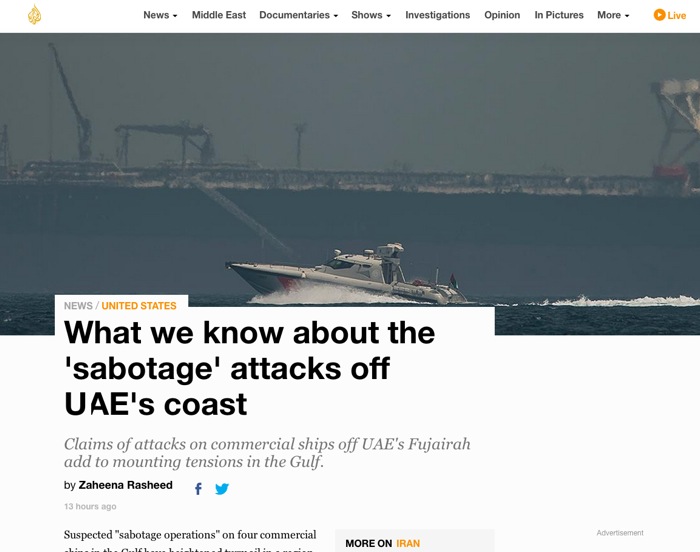 Before going into the details of the story, three premises are necessary. First, Al Jazeera is based in Qatar where, in Al Udeid, there is the largest base of the US Air Force and where a week ago the giant B-52 bombers sent from the White House in the Persian Gulf along with numerous missiles landed. Patriot (ground-to-air) and the attacking group of the aircraft carrier Abrahm Lincoln for alleged alarms by American intelligence about possible sabotage in those waters of the Indian Ocean. It is therefore very probable that the same Arab network, several times a preview of Al Qaeda and Isis propaganda,

USA AND FRANCE TOWARDS THE WAR OF THE GULF: CARO-PETROLEUM NIGHTMARE

Secondly, it must be remembered that on May 2nd the US granted derogation to eight countries importing Iranian oil expired despite the embargo imposed on Tehran for the withdrawal from the treaty of nuclear power abandoned by the US which, as with North Korea , claim to impose restrictions on the manufacture of weapons without wishing to make a small waiver in their armament policy that feeds as many as 15 US holdings among the top 30 in the world as a turnover. Therefore every Iranian customer is now at risk of punishment. Furthermore, it should not be forgotten that, as demonstrated by Gospa News in a report on the shareholders of the arms market, the Bank of Norway is a shareholder in as many as 6 defense multinationals and therefore in any conflict outside its own country it would have much more to gain than from to lose.

LOBBY WEAPONS – REPORT 1: THE US WARRIORS

Having ascertained this we see what Al Jazeera writes about the “buchetto” in a tanker that could trigger the Third Gulf War. “On Sunday, the United Arab Emirates declared that four commercial ships off the coast of Fujairah, one of the largest tanker hubs in the world,” have been subjected to sabotage operations, “writes Zaheena Rasheed on the Al Jaxeera website. – There have been no “injuries or deaths on board ships” or “spills of harmful chemicals or fuel”, said the UAE Ministry of Foreign Affairs. Officials identified damaged ships as the Saudi oil tankers Al-Marzoqah and Amjad, the Norwegian tanker Andrea Victory and a UAE barge, the A Michel. The owners of Andrea Victory, Thome Group, reported that an unknown object hit the tanker above the waterline, causing a hole in the hull. “The ship does not run the risk of sinking” “.

“The Saudi energy minister, Khalid al-Falih, said the attack on Saudi oil tankers occurred at 6 am (10:00 GMT) on Sunday and caused” significant damage to the structure of the two ships ” – adds the Arab network – The United Arab Emirates have published a photo of the damage to the oil tanker flying the Norwegian flag, but have not provided evidence of damage to Saudi and UAE ships “.

THE THESIS OF THE SABOTAGE WITHOUT TESTS

Anwar Gargash, United Arab Emirates Minister of State for Foreign Affairs, called the acts “deliberate sabotage”. The UAE Foreign Ministry has called the suspected attack “a dangerous development”, and al-Falih, the Saudi energy minister, said the “sabotage attacks” aimed to “undermine the freedom of maritime navigation and security of oil supplies to consumers. in the world “. “Unnamed US officials, cited by Reuters and The Associated Press, have identified Iran as a prime suspect – adds Al Jazeera – But officials have not provided any evidence to support the complaint.”

Iranian officials, on the other hand, expressed concern, saying the alleged attacks could have been carried out by third parties to spark the conflict between Washington and Tehran. A few hours after the incidents, Abbas Mousavi, spokesman for the Iranian Foreign Ministry, declared that they are “alarming and deplorable”. But he also called for “clarification of the exact proportions of the accident” and issued a warning “against the plots of criminals to interrupt regional security”.

The conspiracy theory is grafted into continuous skirmishes between the US and Iran, which has repeatedly threatened to close the Strait of Hormuz, a crossroads of one-third of the oil traded by sea but for international laws placed in Iranian territorial waters. Tehran’s threats have obviously become more explicit after Washington issued sanctions against the Shiite country and its oil buyers. Among these are China, India, Turkey, Japan and South Korea that do not fear US sanctions so much and for this reason the White House may be interested in creating an embargo not only through economic sanctions but also through a military control that could find justification in the alleged sabotage.

THE CLASH BETWEEN SAUDITI AND SKIERS IN YEMEN AND ARABIA

Tensions escalated there yesterday, Tuesday 14 May, with the drone attack against oil stations outside the Saudi capital Ryadh that was to be carried out by the Houtis, the Shiite ethnic minority that controls western Yemen and the capital Sana’a . The rocket bombing caused a fire and minor damage at a pumping station, al-Falih said in a statement. It should be remembered that in Yemen a fierce war has been going on for years conducted by Saudi Arabia with US military support until a few months ago with arms gifts (before the killing of Islamic journalist Jamal Kashoggi, columnist of the Washington Post,

The Houtis are in fact supported by the Shiite brothers of Iran and in the US policies, allies of the Wahabite Sunnis of the Kingdom of Saudi Arabia, they represent a potential threat even when they sleep … The attack on Ryadh oil stations follows the massacre carried out by the militias of Arabia Saturday 11 May.

As the Reuters agency from Dubai reported: “The Saudi security forces killed eight people during an operation in the eastern region of Al-Qatif, mainly Shiite,” said the state news agency (Spa). The province of oil production is a regular meeting point between the Sunni-dominated government and the Shiite minorities who complain of discrimination and marginalization. The operation took place on the island of Tarout, just outside the city of Qatif, and targeted a new “terrorist cell”, SPA said in a statement, adding that there are no civilian and police casualties. Saudi security services regularly carry out operations in the area, with various victims caused during the operations in January and September “.

This is unfortunately the Islamic world torn by fratricidal struggles between Shiites and Sunnis resulting from the bloodshed started with the first heirs of the prophet Muhammad. Distressing, tremendous and shameful that the civilization of the United States of America exploits these internal struggles to be able to conquer new resources in oil-producing countries and feed the machine of the multinationals of arms built to make the millionaires of high finance even richer.