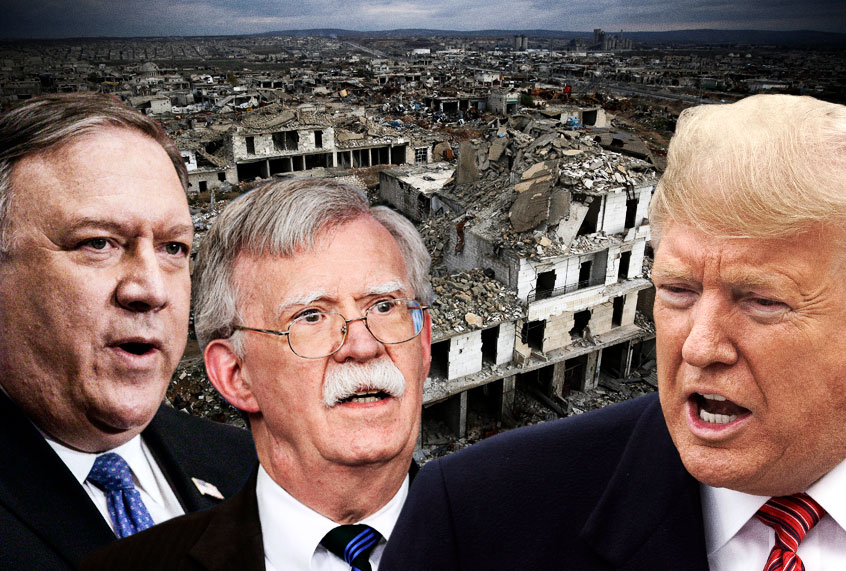 The Washington Post has recently reported that Trump is getting frustrated because many of his advisors, most specifically Mike Pompeo and John Bolton, want to get into a bloody war with Iran. Trump, according to the Post, wants to withdraw from another debacle in the Middle East, and Pompeo and Bolton want to act fast. One unnamed official declared:

“They are getting way out ahead of themselves, and Trump is annoyed. There was a scramble for Bolton and Pompeo and others to get on the same page.”[1]

We all agree that a war with Iran would bring another disaster in the Middle East, and it would be a low blow for the United States. The unnamed official continued to say that Trump “wants to talk to the Iranians; he wants a deal,”[2] but Pompeo and Bolton, we are told, want bloodshed. “He is not comfortable with all this ‘regime change’ talk.” The Post tells us:

“While Trump grumbles about Bolton somewhat regularly, his discontent with his national security adviser is not near the levels it reached with Rex Tillerson when he served as Trump’s secretary of state….Some defense officials have described Bolton’s more aggressive approach as troubling.”[3]

One ought to shake his head in dismay over this precisely because Trump is obviously out of his mind. In fact, one can argue that he has been out of his mind since he took office. Why?

Well, Bolton has been buddying up with Benjamin Netanyahu, the man who posited ad nauseam way back in 1995 that Iran was supposed to acquire nuclear weapons around 2001 or 2002. In his 1995 book Fighting Terrorism: How Democracies Can Defeat Domestic and International Terrorists, Netanyahu unequivocally posited:

“After this time, the Iranian Islamic republic will have the ability to construct atomic weapons without the importation of materials or technology from abroad…The first phase of construction and electrical work will be completed within three to four years.”[5]

Read those statements again very carefully. According to Netanyahu’s fantastical calculation, Iran should have acquired nuclear weapons by 2000. It’s been more almost twenty years and Iran still doesn’t have nuclear weapons. What’s so ironic is that the intelligence community has universally declared that Iran dropped its nuclear programs a long time ago.[6]

But Netanyahu, of course, has never been prepared to deal with those brute facts because he wants to perpetuate the hoax that Iran is still working towards the development of nuclear bombs. Many leaders reject his dubious and risible proposal, but he is using Bolton and other US puppets to get his dirty work done.

Obviously Trump knew all of this long before he ever became president. He knew that Bolton was an ethnic cleanser and a warmonger. Now he is complaining that Bolton wants fresh blood in Iran? Is Trump that stupid? Didn’t virtually every sensible journalist and politician that Bolton was dangerous before he got hired? Did Trump listen to good advice?