Who will claim the Iron Throne—and why? Winning Westeros: How Game of Thrones Explains Modern Military Conflict (Potomac Books, Sept. 2019) brings together thirty expert strategists to answer that question and engage the most popular television series of our time: Game of Thrones. As characters battle for power and control, there is magic and witchcraft, fiery dragons, frozen zombies, chaotic combat, swordplay, and brutal intrigue, creating one of the most intense world-wide strategy plotlines in contemporary fiction.

By applying the theories of our real world to the examples in fictional Westeros, the minds behind Winning Westeros draw connections between George R. R. Martin’s fantasy world and modern military strategy. 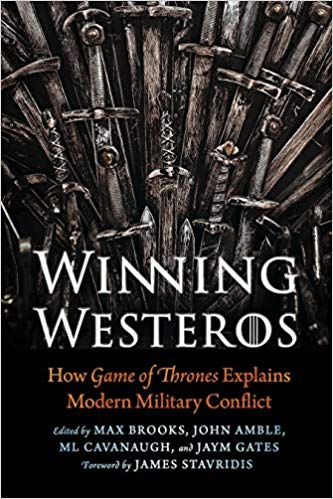 From searching for the source of Tyrion Lannister’s unlikely success to Daenerys Targaryen’s fire-strafing dragons to Jon Snow’s abilities as a strategic leader, Winning Westeros explores how strategies in Game of Thrones can be applied to real war and politics.

Set in the fictitious world of Westeros, the hit television series Game of Thrones chronicles the bitter and violent struggle between the realm’s noble dynasties for control of the Seven Kingdoms. But this beloved fantasy drama has just as much to say about the successful strategies and real-life warfare waged in our own time and place.

Winning Westeros brings together more than thirty of today’s top military and strategic experts, including generals and admirals, policy advisors, counterinsurgency tacticians, science fiction and fantasy writers, and ground‑level military officers, to explain the strategy and art of war by way of the Game of Thrones saga.

Each chapter of Winning Westeros provides a relatable, outside‑the‑box way to simplify and clarify the complexities of modern military conflict. A chapter on the doomed butcher’s boy whom Arya Stark befriends by World War Z author Max Brooks poignantly reminds us of the cruel fate that civilians face during times of war.

Another chapter on Jaqen H’ghar and the faceless men of Bravos explores the pivotal roles that stealth and intelligence play in battle. Whether considering the diplomatic prowess of Tyrion Lannister, the defiant leadership style of Daenerys Targaryen, the Battle of the Bastards and the importance of reserves, Brienne of Tarth and the increased role of women in combat, or dragons as weapons of mass destruction, Winning Westeros gives fans of Game of Thrones and aspiring military minds alike an inspiring and entertaining means of understanding the many facets of modern warfare. It is a book as captivating and enthralling as Game of Thrones itself.

The book is edited by Max Brooks, John Amble, ML Cavanaugh, and Jaym Gates.
The foreword is written by James Stavridis.

About Author:  Max Brooks is a writer, public speaker, nonresident fellow at the Modern War Institute at West Point, and nonresident senior fellow at the Atlantic Council. He is the author of World War Z: An Oral History of the Zombie War and The Harlem Hellfighters, among other works. Brooks, and the other coeditors of this book, edited Strategy Strikes Back: How Star Wars Explains Modern Military Conflict (Potomac Books, 2018). John Amble is the editorial director at the Modern War Institute and a military intelligence officer in the U.S. Army Reserve. ML Cavanaugh is a nonresident fellow at the Modern War Institute and a U.S. Army strategist with global experience. His writing has appeared in the New York Times, the Washington Post, the Wall Street Journal, and USA Today, among other publications. Jaym Gates is an acquiring editor for Nisaba Press and Falstaff Books, as well as a freelance editor and author. She is the coeditor of War Stories: New Military Science Fiction.