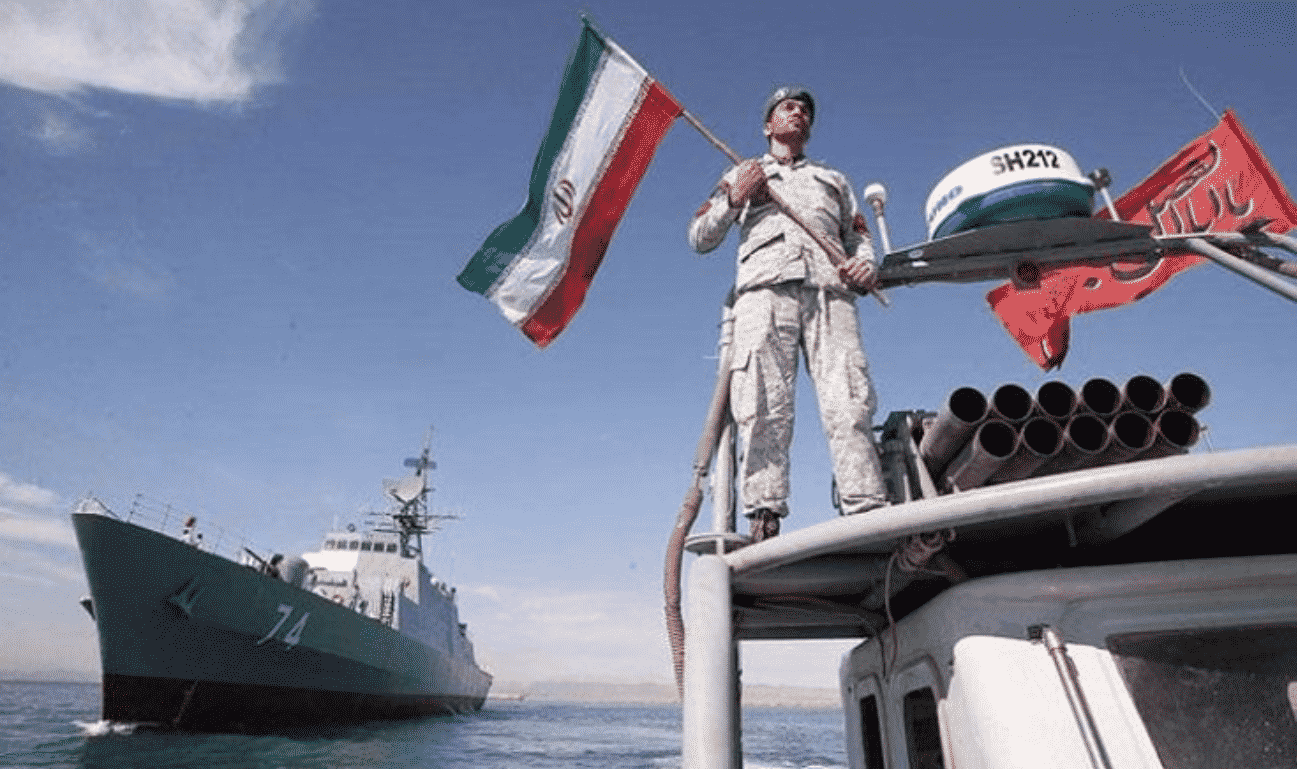 Again and again, U.S. politicians’ inhuman cries of fear and terror are emanating from the grim shores of the Potomac River. This time around, it was U.S. Secretary of State Mike Pompeo and John R. Bolton, the National Security Advisor to the American President, who launched into a “duet”.  The two “great diplomats” informed the rest of the world, in confidence, that they suspected Iran of preparing for an escalation in tensions in the Persian Gulf region.  Due to trepidation, Mike Pompeo said with difficulty “We have continued to see activity that leads us to believe that there’s escalation that may be taking place, and so we’re taking all the appropriate actions, both from a security perspective as well as our ability to make sure the president has a wide range of options in the event that something should actually take place”. In Russia, there is an apt saying “If you appear to be seeing things, make the sign of the cross”.

So what are their supporting arguments? According to some sources at a virtually unknown tabloid, the Axios news portal, Israeli intelligence services informed their U.S. counterparts that Tehran supposedly intended to harm Washington’s interests in the Persian Gulf region. I am sure you are aware that in the current climate, Tel Aviv may share all kinds of information with the rest of the world in order to turn not only the United States but the entire West against Iran. After all, the “powerful” Israeli Prime Minister, “Bibi” Netanyahu, who sees himself if not as God himself, then at least as Secretary-General of the U.N, did not reiterate the following warning in vain “Israel will not allow Iran to acquire nuclear weapons”. However, both the Prime Minister and the United States choose not to talk about the fact that Israel has been in possession of nuclear weaponry and means of transporting it for many years now. This, incidentally, contravenes international laws, and, therefore, threatens peace and stability in the Middle East and nudges the region closer to war.

John Bolton’s remarks about Tehran were aggressive and threatening. In his zeal for war, he coarsely announced that, as a warning to the government of Iran, the United States had sent a naval forces unit, headed by Abraham Lincoln (a rusty aircraft carrier), and a strategic bombing unit to the Middle East. Brian Hook, the U.S. Special Representative for Iran, has completely lost it, just as, back in the day, James Forrestal had, when he purportedly screamed “The Russians are coming. The Russians are coming. They’re right around. I’ve seen Russian soldiers,” as he committed suicide by jumping out of a window. Mr Hook decided to earn his recognition as a “tough and resilient warrior” by peremptorily stating that the United States of America was prepared, if necessary, to use force against Iran in retaliation for a possible attack on U.S. armed forces or their allies in the Middle East. All this U.S. politician needs to do in order to gain as much notoriety as James Forrestal is to shout “Iranians are coming. I have seen them,” and to leap out of the window.

Mohammad Javad Zarif, the Foreign Affairs Minister of Iran, made a fairly direct statement in an interview with the TV channel Fox News and said that the National Security Advisor to the U.S. President, John Bolton, as well as Israel, Saudi Arabia and the UAE were drawing the United States into a conflict against Iran.  On 22 April, the U.S. presidential administration announced that it would not extend sanction exemptions to countries purchasing oil from Iran. The White House expects that owing to this decision exports of Iranian oil will fall to zero. It is fairly obvious that the Donald Trump administration is striving to deprive Iran of any benefits of staying committed to the nuclear deal by imposing new sanctions on this nation.

All these factors definitively point to the culprit who is causing tensions and threatening the Pentagon in this very important and volatile region of the Persian Gulf, located thousands of kilometers away from the United States. But is this culprit Iran? No, certainly not.

It is the current Donald Trump administration and its bigwigs, who recently, it seems, found out about the existence of gunboat diplomacy and decided to employ it, just as in the past. But those distant times are gone for good. And if we were to point our fingers at the person who has brought the world to the brink of yet another catastrophe and war, the culprit would be the current U.S. President Donald Trump, who, for reasons unknown, a year earlier, withdrew from the nuclear deal and imposed new sanctions on not only Tehran but also on any nations that conduct any business with Iran. However, during an entire year, monitors from the IAEA (the International Atomic Energy Agency), an international organization under the U.S. thumb, conducted thorough inspections of Iran on more than one occasion and did not report any violations.

So why did the American President violate international laws with such impunity and withdraw from the international nuclear deal with Iran unilaterally? The key to this puzzle is fairly simple. Donald Trump decided to show the entire global community that he was the undisputed master of the world and that he could do whatever he deems fit whenever he wanted to.

But have these actions been in the interests of the United States or, at that, of any other nations in the world? Of course not. In an article in Foreign Policy, Stephen Walt, a professor of international affairs at Harvard University, focused on unprincipled policies followed by the current U.S. President, and predicted that they would fail soon. To date, Americans are already having trouble reaching a consensus on a number of international issues, including ones concerning Iran. According to the professor, Donald Trump’s actions have merely prompted opponents of the United States to unite together and have pushed its allies away.

As numerous factors illustrate, the Trump administration supports a one-sided approach to foreign policy issues. For instance, the U.S. President has threatened to start a trade war with Europe, has suggested withdrawing from the Transatlantic Trade and Investment Partnership, and has made unrealistic and categorical demands on Iran, the DPRK and Venezuela, which have gone unmet so far, contrary to expectations.  As a result of such actions, even weak nations, fearing betrayal, do not wish to be in the sphere of U.S. influence, which makes it difficult for America to find allies and establish international coalitions. At the same time, Washington’s egotistical policies have brought countries such as Russia and China closer together so that they can now oppose the United States.

Incidentally, earlier there were reports that European nations felt distrust towards the USA from a financial perspective. Several NATO allies of the United States made a decision, at the same time, to move their gold from American vaults.  Hence, the fact that the U.S. has lost its ability to influence world affairs may signal a complete fiasco for this nation in the future.

Washington’s poorly thought through but fairly aggressive policies have not yielded any benefits for Washington with respect to Iran. Moreover, on 8 May, the date that marks a one-year anniversary of U.S. withdrawal from the nuclear deal, Iran announced that it would no longer comply with several clauses of this agreement, including the ones concerning stocks of enriched uranium and heavy water. Tehran stated that it did not feel obligated to honor commitments in relation to those clauses. Iran indicated that the measures taken were in response to U.S. violations of the nuclear deal, the imposition by Washington of sanctions against Tehran, and the inability of the remaining parties to the JCPOA (the Joint Comprehensive Plan of Action), i.e. Germany, France, Great Britain, China and Russia, to resolve the issues that have arisen to Iran’s satisfaction. As a result, Iran gave the previously mentioned countries 60 days to try and safeguard Iran’s interests. In turn, it has promised to start honoring the commitments, which it has temporarily reneged on, again within the same period if these nations manage to find a solution to the problems resulting from U.S. actions.

The U.S. presidential elections are also drawing near, and Donald Trump needs only successful feats, first and foremost, in relation to Iran in order to get re-elected. In other words, the American President should make haste and consolidate his position prior to the election in order to win. In turn, the Iranian leadership has noted that Tehran is in no hurry, as its people have lived under pressure from U.S. sanctions for 40 years and will surely be able to survive another 40 years in these conditions. The U.S. administration needs to fully understand that Iran is not a country that will happily surrender to be at the mercy of the victor. Hence, the United States ought to put some thought into developing the right policy to negotiate with Iran.