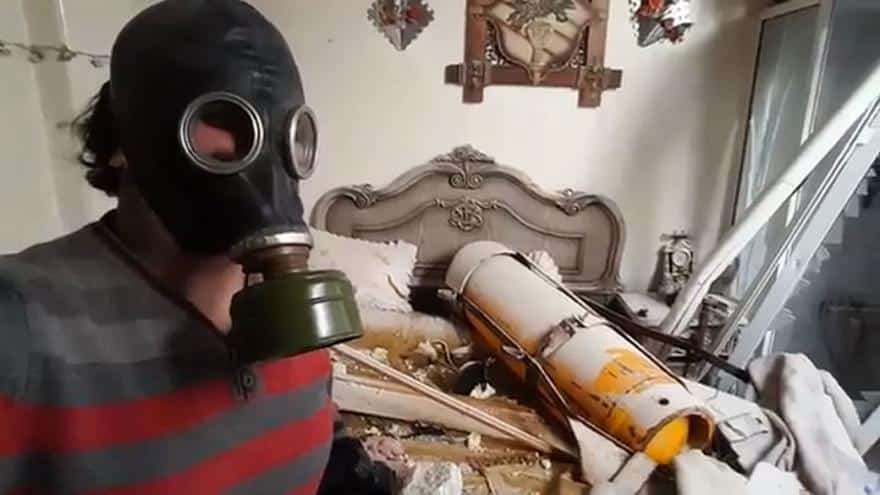 [ Editor’s Note: Roger Waters is a one-man entertainer version of VT, railing against the machine. Despite the widely held belief in that industry that your career is over if you cross Deep State or Israel-lobby red lines, he just keeps blasting away at controversial issues.

He has steadfastly supported BDS and has been the biggest influence on the younger music crowd people by setting an example. Rather than wasting time trying to convert the entertainment industry, he has focused on his audience, weaving injustice themes into his concerts. God bless the man.

Unfortunately, despite his proving that he could do it and still keep his career rolling, his fellow entertainment people continue to cower in fear.

We have always thought Roger was a VT reader because he has covered all the key points of the bogus Syrian gas attacks that we have published year after year, but to my knowledge we have never had any direct contact with him.

Maybe he can do a show in Grand Rapids someday and we can have dinner and brief him on some other things to broaden his human rights portfolio… Jim W. Dean ]

After the media came out in force to claim Syrian President Bashar Assad dropped canisters of chlorine gas on his own people in Douma, Syria last April, the West took action. Britain, France, and the US pounded government positions with air and missile strikes in response, killing six soldiers and three civilians.

“You didn’t have to be a bloodhound to smell the rat,” Waters wrote in a Facebook post on Tuesday.

While the Organisation for the Prohibition of Chemical Weapons (OPCW) declared this March that Assad was responsible for the attack, a newly surfaced OPCW engineer’s report directly contradicts the organization’s claim.

The report suggests that so-called gas canisters were placed at the scene of the attack by hand, implicating the various ‘rebel’ groups active in the area, and not the Syrian government.

“The chances that there was a chemical weapons attack are negligible,” Waters wrote. “There will probably be no headlines, we are living in a dystopian nightmare where big brother writes the narrative, and the peoples only responsibility is to remain comfortably numb.”

Dr. Piers Robinson, head of the Working Group on Syria, Propaganda, and Media – the independent organization that verified and released the new report – told RT that he would like to know “what kind of political pressure might have been brought to bear on the OPCW” by Paris, London and Washington to suppress an internal engineering report.

With mainstream media outlets avoiding the story, the Russian Reconciliation Center for Syria warned on Tuesday that militant groups in Syria are gearing up to stage fresh “chemical provocations” in Idlib and Aleppo provinces, possibly targeting refugees. The terrorist group ‘Hayat Tahrir ash-Sham’ have created a special “chemical wing” to stage the attack, the center claimed.

Fighting between terrorists associated with the Al-Nusra Front and the Syrian Army has escalated in the Idlib region since the beginning of May.