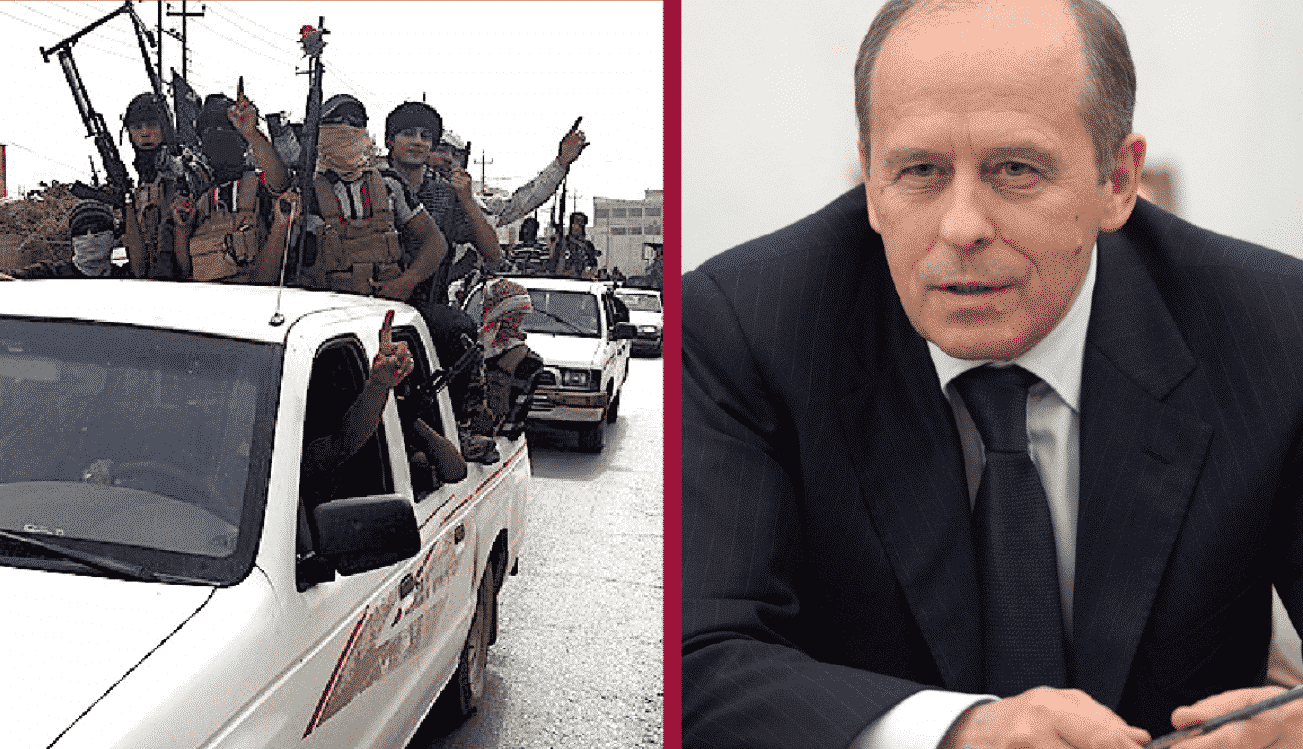 Where did the ISIS jihadists freed by the US from the Taliban prisons, those who surrendered to the Kurdish SDF militias after the fall of Baghouz, a Daesh stronghold in Syria, or who fled from the Al Rukban refugee camp on the border? Syrian with Iraq and Giodania? Where did the European Foreign Terrorist Fighters go?

Many of them were transported elsewhere by the same US troops. Osa reveals that thousands of jihadists have massed in northern Afghanistan to infiltrate the former Soviet Union countries, all with a Muslim majority, where they could unleash uprisings and from where they could plan attempts to enter Russia.

The alarm was not raised by an anti-terrorist reporter but by the head of the Russian secret service FSB, the former KGB, Alexander Bortnikov.

This could be part of a strategy of terror in which CIA agents are masters, as taught by the history of US presidents Abraham Lincoln and John Fitzgerald Kennedy, assassinated in obscure paramilitary-terrorist conspiracies never fully revealed due to an avalanche of cover-ups of evidence and the killing of the assassins.

At a time when the tension is skyrocketing in the Persian Gulf as in Iraq and also in the provinces of Syria bordering on Idlib, the stronghold of Al Nusra, an affiliate of Al Qaeda , a front of further tensions is developing in neighboring countries to southern Russia as Turkmenistan, Tajikistan, Uzbekistan and Kyrgyzstan, in order to keep Tehran and Damascus’s main ally (and Venezuela under attack ) engaged in war front near their borders.

What interests does the US have to protect ISIS? Simple justifies every military operation to enrich the arms lobby with the excuse of the terrorist threat, they kill fundamentalist Jihad militiamen to die in the name of Allah and free their allied commanders.

This has happened in recent months in Afghanistan with the release of Aminullah , one of the main commanders of Daesh, as happened in 2009 with the release of the caliph of the Islamic State Abu Backr Al Baghdadi , detained by the US in the Camp Bucca prison camp in Iraq is released on the orders of US President Barack Obama, two years before he founded ISIS and began insurrections in Mosul and then moved to Syria and unleashed the hell of the civil war alongside the US-funded rebels since 2006 by the president George Bush junior .

There is multiple evidence of funding for rebels and ended up in ISIS hands even with full US awareness. Bulgarian journalist Dilyana Gaytandzhieva had discovered the CIA arms trade for ISIS terrorists . And it was for this reason that it was fired from its Trud network for fear of retaliation but assumed by Lebanese television Al Mayadeen.

The Italian reporter Lorenzo Vita today published an article on  InsideOver , a column of geopolitics and chronicles of the Il Giornale war, on Toyota Hilux pick-ups that are among the most used by Isis jihadists.

He quoted a Public Radio International inquiry into 43 open-top jeeps purchased by the US State Department, donated to anti-Assad FSA rebels in Syria and ended up in the hands of Islamic State terrorists.

Australian-based Daily International reported hundreds of Toyota Hilux stolen from Foreign Fighters in Oceania and arrived in the Middle East to be employed in Yemen by Al Qaeda and in Iraq by Daesh militia.

“A branch of the Islamic State has amassed about 5,000 militants in northern Afghanistan at the border of the post-Soviet republics of Central Asia, the Russian FSB director warned, adding that many of them fought in Syria – the network writes Russia Today – “Particularly worrying is the deployment of terrorist groups in the northern provinces of Afghanistan,” FSB director Alexander Bortnikov told former Soviet intelligence chiefs in Dushanbe (capital of Tajikistan – ed) “. The alarm also takes on great significance because the four states bordering Afghanistan are all predominantly Sunni Muslims like the neighboring Kazakh, which has kilometers of border with Russia.

THE ALARM OF THE  RUSSIANS FOR 5000 JIHADISTS

Bortnikov warned that “Wilayat Khorasan”, an affiliate of the Islamic State (IS, formerly ISIS), managed to gather 5,000 fighters in the area. The terrorist cells are now infiltrating the countries of the former Soviet Union where they are creating ties to organized crime. To maintain a low profile, they try to disguise themselves as refugees and migrants.

The Islamists have suffered sharp military defeats in Syria and Iraq, but they still remain a danger. “Now they are trying to reorganize themselves in areas that the Syrian government does not control, or hide in the refugee camps,” the head of the FSB noted in a statement reported RT. Among these, a strategic strategic point is represented by the Camp of displaced persons of Al Rukban, managed by the anti-Assad rebels of the FSA under protection and thanks to the contribution of the nearby US military base US Army of Al Tanf.

OTHER CHILDREN DEAD IN US Occupied Syria

A strategic place, where the killer of Christchurch Brenton Tarrant , considered by many sources the agent of the Mossad, was trained by the same ISIS terrorists , who made the massacre in New Zealand mosques in the logic of sharpening the tensions between white extremists and Muslims in order to legitimize in the eyes of the Islamic world, possible terrorist attacks like the one that took place recently in Sri Lanka and organized by the extremist Imam who had been in Syria and had maintained close ties with ISIS. All this to trigger the strategy of terror and motivate successive US military reprisals around the world.

Another alarming trend is that terrorist groups are transferring their forces to other parts of the world, including northern Africa and south-eastern Asia. “Despite military losses, terrorist organizations are accumulating huge foreign funds to prepare for attacks” worldwide “- Russia Today adds – In particular, they use cryptocurrencies and online payment services to receive money from abroad. Revenues from “illegal oil trade, human trafficking and other criminal activities” are also used by terrorists to stay afloat “.

It should also not be forgotten the trafficking of organs for which the White Helmets have been accused, often complicit in the actions of Al Qaeda jihadists, before the UN by a Russian anti-terrorism organization. The same White Helmets, founded and trained by a former British military 007, received just a few weeks ago a $ 5 million grant from the US Government (which previously supported them with hundreds of millions of dollars).

$5 MILLION USA TO WHITE HELMETS: “COMPLICI OF JIHADISTS AND THIEVES OF ORGANS”

ALARM FOREIGN JIHADISTS ALL OVER EUROPE

Last month, the director of the FSB warned the militants of the Islamic State that they return to their countries of origin and create terrorist cells at home. More than 1,500 of 5,000 European jihadists who previously joined the IS, the so-called Foreign Terrorist Fighters, managed to return to their countries of origin from the Middle East, as Bortnikov reported at the time.

To these could be added tomorrow the approximately eight hundred FTF foreigners mostly Europeans detained in SDF prisons in Rojava, in northern Syria controlled by the Kurdish YPG. They could in fact also be freed after the Governments have not responded to the appeal of the American president Donald Trump to take them back into detention and put them on trial in their own countries. The White House, on the other hand, had refrained from saying that there were also  other 800 Foreign Fighters arrested but originally from Saudi Arabia , a historic ally of Washington, and, according to the American Muslim MP Ilhan Omar, not only financiers but also founders of Al Qaeda.

Al Qaeda was formed by Osama Bin Laden, brother of Salm Bin Laden and son of Mohamed Bin Laden, two of the most important builders of the Kingdom of Saudi Arabia, of Sunni Muslim (Wahhabi) confession just like the Qaedist terrorists and of the Isis. But this will be the subject of a forthcoming report also on the place where Al Baghdadi is hiding …