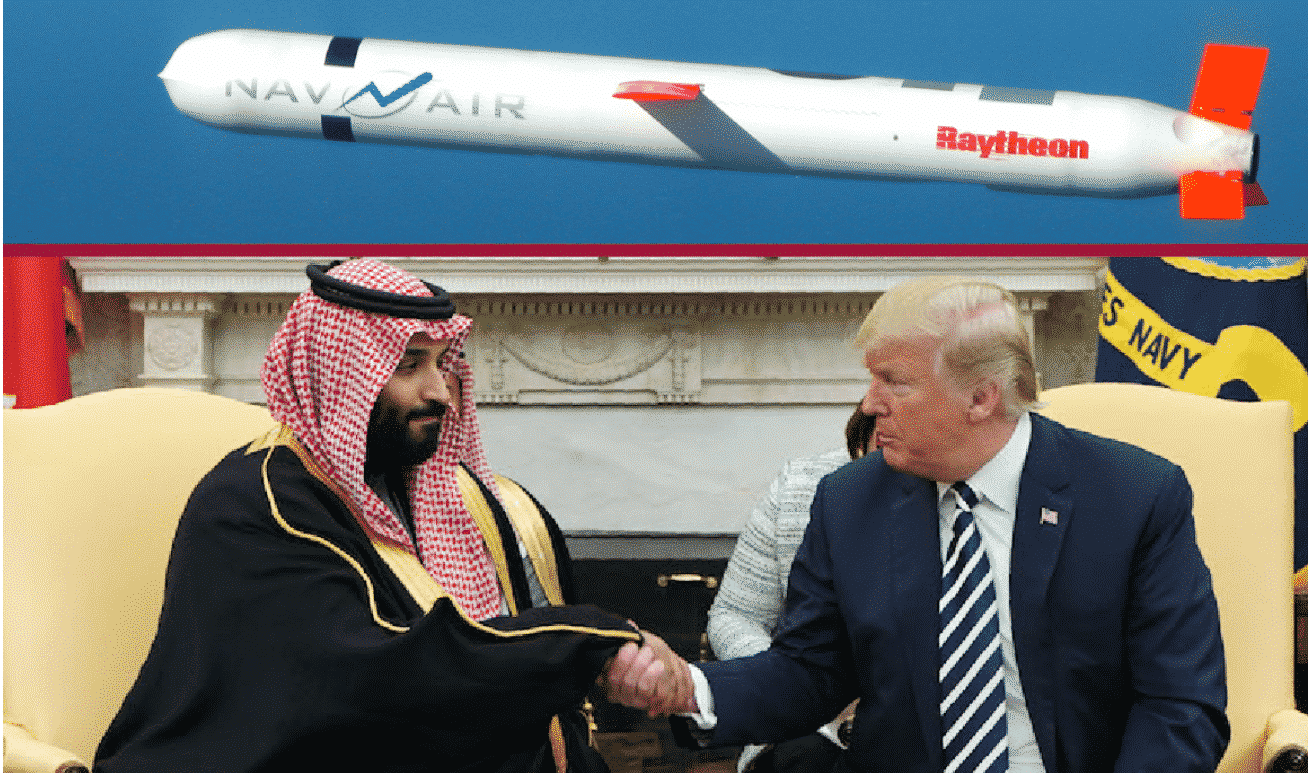 US Secretary of State Mike Pompeo has confirmed that the administration has invoked a rarely-used legal statute to “immediately” clear $8.1 billion in arms sales to its Arab allies in order to “deter Iranian aggression”. The transfer of weapons to Saudi Arabia, the United Arab Emirates and Jordan, which reportedly includes a number of Raytheon precision-guided munitions (PGMs) and Javelin anti-tank missiles, cannot be delayed any longer “during a time of increasing regional volatility,” Pompeo said in a statement on Friday».

This is one of the main news released by the Russia Today network on friday night. The White House then decides to use an emergency procedure to bypass the Congress which, both in the Senate and in the House, had approved a motion to stop military aid to Saudi Arabia after the brutal murder of journalist Jamal Kashoggi in the Saudi consulate in Istanbul and the massacres of civilians and children in bombings in the Muslims Yemen war: between Shiites Houti and Sunni, rivals supported by the Kingdom of Saudi Arabia but also by Al Qaeda

Months ago Trump commented cynically on the massacres saying that the guided missiles of the American Lockheed Martin were intelligent but the Saudi military were not able to use them: about 60% of the dead in the Yemeni conflict, in fact, were caused by bombing by the Saudi-led coalition supported by Washington also with gifts of military supplies.

TRUMP CHALLENGES THE CONGRESS FOR WEAPONS TO SAUDI ARABIA

Now the American president comes to challenge the Congress just to continue to help the ruthless friends of Riyadh provoking the immediate reactions of the Democrats who would at least save face, according to the hypocritical teaching of Barack Obama, pacifist in the heart but warrior in the mind for the “International peace and serenity”.

With great unscrupulousness, disgraced Trump, more and more interested in gaining the confidence of the arms lobbies, had also canceled the internal investigation launched by Obama to calculate the civilian casualties caused by drone attacks, especially in Somalia, Syria and Yemen. It should not be forgotten that the US Africom has the Camp Lemonnier military base in Djibouti, about 30 kilometers from the Yemeni coasts controlled by the Houti revolutionaries.

«Foreign arms sales normally require congressional review, but the law allows the president to skip legislative approval by declaring an emergency and citing “national security interests.” The same method was used to sell weapons to Saudi Arabia in the run-up to the 1991 Gulf War and the 2003 invasion of Iraq» highlights Russia Today on report.

Now the danger, according to the top US diplomat, comes from Iran, whose perceived “threat” the disgraced Trump administration has been drumming up in the recent weeks. The Pentagon has sent a carried group, bombers, air defense missiles Patriots and 1,500 troops to the region, having accused Tehran of an ongoing “campaign” against Washington’s allies and interests.

“These sales will support our allies, enhance Middle East stability, and help these nations to deter and defend themselves from the Islamic Republic of Iran,” Pompeo said, criticizing the Senate for stalling on the review of the deals.

Among the main suppliers of war material and defensive systems of Saudi Arabia there is also France above all through the Thales holdings, owned by the government, the Dassault family and the New York investment fund, BlackRock, led by the American Zionist Larry Fink. The holding company Thales Group which has two offices in Riyadh and a third Al Jubayl, a city overlooking the Persian Gulf.

In recent days the transfer on the Saudi cargo ship Bahri Yanbu of a supply of French-Dutch-made Caesar howitzer cannons (Giat Industries, Kmw-Nexter group) was blocked by the protests of pacifist groups first in the port of Le Havre and then in that one of Genoa because, as Reuters reports, “the French government has refused to provide details on the order of arms”.

The fear of the activists is that they were in fact destined for the conflict that is tearing apart Yemen, for which the UN has imposed an embargo, ignored by many countries, to import weapons. After the protests of the port unions, the cargo left Genoa heading for the port of La Spezia to carry out the load there. According to some local media, it was able to complete the transshipment with the French cannons and an Italian production generator. Therefore it left Italy to head towards the Arabia.

The Yemeni issue also weighs on the bombs of the German corporation Rheinmetal, manufactured in the Italian branch in Sardinia and assembled in the United Arab Emirates to circumvent the restrictions strictly observed by Germany. Precisely because of the bombs of the RHM holding company, also attended by BlackRock, the CEO Larry Fink received the Black Planet Awards 2017 from the pacifist group Ethecon, the prize for those who make the world worse.

Lawmakers have been refusing to give their seal of approval to the weapons sales, in part due to concerns over the reports of mounting civilian casualties in the Saudi-led bombing campaign in Yemen. Senator Robert Menendez (D-New Jersey), ranking member of the Senate Foreign Relations Committee, blasted the Trump administration’s decision to move ahead with the sales while sidestepping a congressional review.

“I am disappointed, but not surprised, that the disgraced Trump administration has failed once again to prioritize our long-term national security interests or stand up for human rights, and instead is granting favors to authoritarian countries like Saudi Arabia,” Menendez said.

Without going into specifics of the deliveries, Pompeo said that the military equipment that to be shipped to the Arab countries includes “intelligence, surveillance and reconnaissance (ISR), munitions, and other supplies.” However, according to a report by Reuters that cited the notification sent to Congress, they would include offensive weapons. That had become the bone of contention between the White House and lawmakers.

According to a congressional aide cited by Reuters, Congress had in principle agreed to clear the way for defensive weapons sales, but refused to budge in on the offensive arms out of concern they might be used to bomb civilians in Yemen.

Pompeo referred to the ongoing US military build-up at Iran’s doorstep, saying the sales will “reinforce recent changes to US posture in the region to deter Iran.” Washington has so far provided little evidence or details on Iran’s alleged threat, describing it in vague terms and claiming that it has not materialized precisely due to the US build-up.

«US Democratic politicians expressed scepticism and alarm after receiving closed-door briefings from key disgraced Trump administration officials on Tuesday about escalating tensions with Iran – reports Al Jazeera, the Qatar’s araba network – The briefings were given by Secretary of State Mike Pompeo, acting Secretary of Defense Patrick Shanahan, Chairman of Joint Chiefs General Joseph Dunford and an official from the US Defense Intelligence Agency».

“Secretary Pompeo made a very lengthy political argument and he argued, ‘Here are all the terrible things that Iran has done’, and he spent about 10 minutes until I cut him off,” Representative Adam Smith, the Democrat chairman of the House Armed Services Committee, told reporters after the briefing for House members.

“And as every member who stood up has said, ‘We know Iran is bad. What is the policy going forward?’ There wasn’t enough information on that,” Smith said.

A DANGEROUS GAME WITH IRAN

Iranian Foreign Minister Javad Zarif, in an interview broadcast on CNN on Tuesday, said the US is “playing a dangerous game”, warning that “having all these military assets in a small area is in of itself prone to accidents.

Tensions between the two countries mounted this month, a year after Trump pulled the US out of the landmark 2015 nuclear deal in which Iran agreed to curb its nuclear programme in exchange for sanctions relief.

Trump’s decision to withdraw the US from the Joint Comprehensive Plan of Action (JCPOA) has led to the reimposition of US sanctions as part of a “maximum pressure” campaign against Tehran.

Iran urges UN to launch talks over ‘alarming’ Gulf tensions For its part, Iranian officials have said Tehran had “acted in good faith” over the nuclear deal. They accuse the US of waging “economic warfare” with the reimposition of sanctions, as well as its move to reduce Iranian oil exports to zero.

But as we wrote in Gospa News there is a suspicion that the White House is in alarm over the agreement between Iran and Iraq on the dredging of the Arvand river for a collaboration in the maritime traffic of oil tankers from the two Middle Eastern countries to the Persian Gulf.