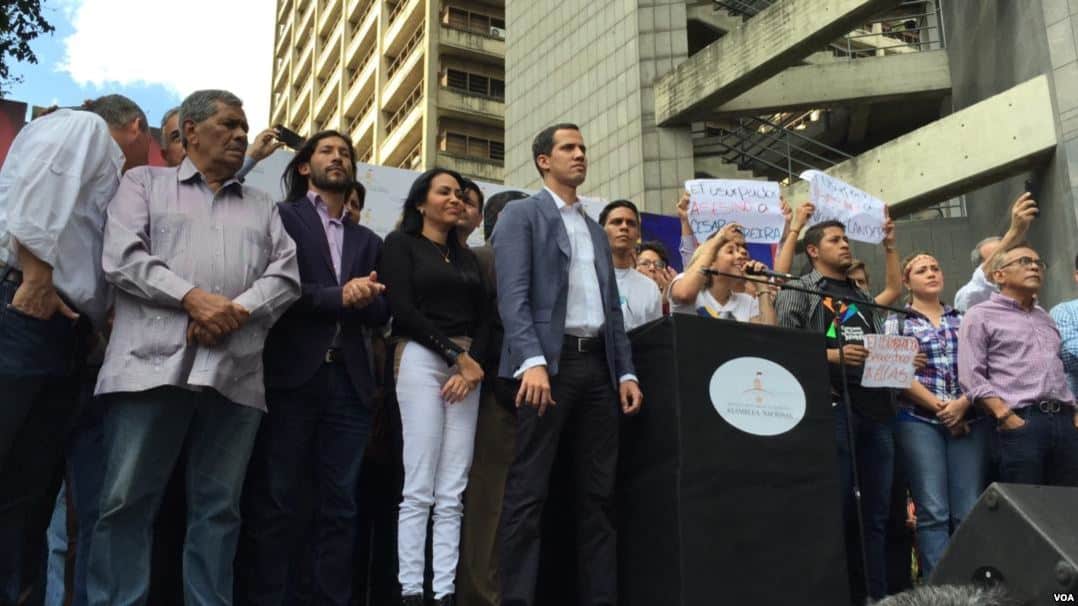 [ Editor’s Note: The Venezuela story went quiet for a couple of weeks without the usual threats and bluster from the White House Sanctionistas.

This was a strong indication that Trump realized he was at a stalemate and was pushing the Guaido opposition to find a way out of the mess. So the key question to ask is “why now”, why is the US shifting gears?

This is the third round of talks coming up. See below Guaido’s mention of free elections when there has already been free elections, massively validated by international observers, which the opposition lost and then set up its rump fake Parliament at the request and support of the US, I suspect.

All I can see at this point is the “my cup runneth over” reason, in that the Trumpster is in conflict with a growing number of nations, including even Japan now over its car imports here, despite all the jobs created by its US plants.

Another good sign is the disgraced Trump/Bolton/Pompeo Maduro bashing has been toned down, something that Iran must be jealous about, but should be happy, as it shows the Sanctionistas can adjust tactics, especially when what they have been using is failing.

The people of Venezuela continue to suffer at the hands of the US due to the theft and freezing of all Venezuela’s funds to pay for what its people need. The US has failed miserably to lay the blame for that on Maduro.

All those Venezuelans who have died due to the medical supplies blockade were negligent homicides by the US, period. Shame on us.

This is not my opinion, but clearly stated international law and UN charter basics, which the Trump administration has effectively been using as toilet paper. Instead of gassing Maduro’s supporters, the US has put them in “denial-of-medical-treatment concentration camps”.

Gordon is at the point of thinking “disgraced” should always be put in front of Trump’s, Bolton’s and Pompeo’s names. Never have so many owed so little to so few as these misfits, perfect examples of the Peter Principle… Jim W. Dean ]

– First published … May 26, 2019 –
–
Both Caracas and Venezuelan opposition leader Juan Guaido have confirmed they sent their representatives to Oslo for talks scheduled to begin next week, a second such attempt at dialogue within two weeks.
–

As the Venezuelan government and the opposition remain deadlocked, with Western-backed, self-proclaimed ‘interim president’ Guaido failing to enlist enough support from the military to overthrow President Nicolas Maduro last month, the parties appear to be turning to diplomacy.

Both Guaido and Maduro confirmed on Saturday that their respective delegations will meet in Oslo next week. It was reported that high-ranking officials from the Maduro government and close aides to Guaido have already arrived in the Norwegian capital.

The confirmation came several hours after Norway announced it would host the negotiations, a follow-up from an earlier round of secretive talks held last week at an undisclosed location in the Norwegian capital.

At the time, Norway’s NRK broadcaster reported it was the second time Maduro and Guaido representatives sat down for talks, which would mean the parties are now gearing up for a third round.

While there is little information on the outcome of the previous rounds, it has been confirmed that the opposition delegation would be led by the same lawmakers – National Assembly Vice President Stalin Gonzalez, former Caracas area Mayor Gerardo Blyde, and former Transport Minister Fernando Martinez Mottola.

In a statement on Saturday, Guaido said the opposition would insist on the “cessation of usurpation, transition and free elections.”

Maduro thanked the Norwegian government for its role in the peace-making effort, adding that the delegation from Caracas has departed to Oslo “with a willingness to work on the agreed comprehensive agenda and to advance the conclusion of good agreements.”

The Venezuelan government delegation would consist of Information Minister Jorge Rodríguez and Miranda state Governor Héctor Rodríguez, who took part in an earlier round of talks, and would also include Foreign Minister Jorge Arreaza. The secretary of the Venezuelan National Human Rights Council (HRD), Larry Devoe, is expected to show up as well, AFP reported, citing anonymous officials.

Even as the Venezuelan opposition seems to accept the idea that talks with Maduro may be the preferable way out of the crisis, its backers in the US State Department have been quick to dismiss any solution short of ousting Maduro, stating that the only subject worth discussing is “the conditions of his departure.”

“We hope the talks in Oslo will focus on that objective, and if they do, we hope progress will be possible,” spokeswoman Morgan Ortagus said.

The US was the first country to recognize Guaido, which dozens of its allies took as a nod to do the same. Washington has refused to rule out a military invasion in Venezuela, insisting that “all options” should remain on the table.

In the meantime, it has been choking the Venezuelan economy with a barrage of crippling sanctions, estimated to have cost the Latin American country $130 billion since 2015.

On Monday, Maduro proposed holding snap elections to restock the National Assembly, currently led by Guaido, which functions as a parallel legislature to the Constituent Assembly staffed by Maduro allies.