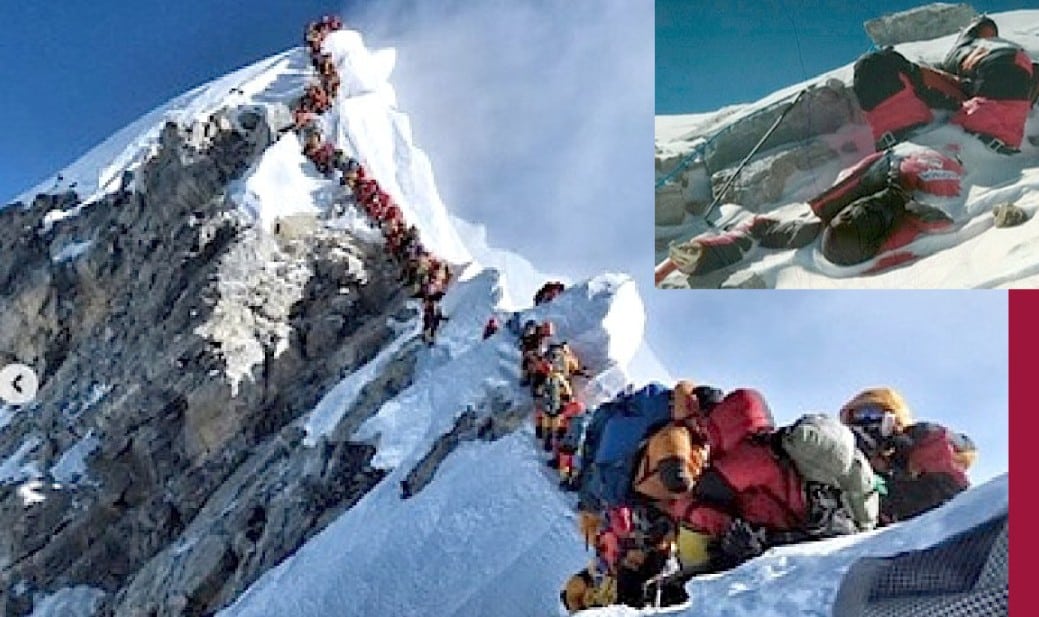 Editor’s note: I nearly got sucked into this one myself, back when a ticket was only $50k.  6500 meters without oxygen and carrying weight is exhausting, even when in top condition, particularly for a then 65 year old.

But when you see the conditions, a mountain strewn with trash, frozen bodies everywhere and “I climbed Mount Everest” now like saying “I voted for Trump,” there are better ways to spend the cash.g

Four million dollars: $ 4,191,000 to be exact. This is the astronomical sum received from Nepal so far in the spring season thanks to the climbs on Mount Everest, the highest peak in the world with its 8,848 meters. This gain alone explains why the government does not limit the numerous permits to climb that would have caused an overcrowding of mountaineers on the summit in recent days becoming the cause of as many as 10 deaths in just 12 days. Thus the number of victims of Sagaramāthā rises to 307, the Nepalese name of the mountain which in Sanskrit means “god of the sky”, most of which are caused by avalanches or blizzards, but now also by long periods of stay above the 8 thousand meters due to high altitude illnesses or exhaustion of oxygen cylinders.

The BBC reported that two other climbers, one British and one Irish, died Thursday, May 24th after experiencing an illness due to altitude. The BBC reports this. “It is the eighth and the ninth victim in a week and the tenth of the season that began on May 14th, while the controversy over the overcrowding of the” roof of the world “and the high number of permits issued by the authorities of Nepal are increasing: 381 per the only spring season, at a cost of $ 11,000 each »says the ANSA agency by publishing the photo posted on Nirmal Purja’s Instagram profile.

In the image you can see hundreds of climbers in single file on the breathtaking ridge, one behind the other, waiting to reach the coveted peak. According to the media there are 320 people: a figure impossible to verify as quite unlikely because it would mean that almost all the applicants for the extremely expensive permit have reached the top on the same day and at the same time. But even if there were only 200 of them, the emergency remains and has sparked harsh controversy over the risk that mountaineers run precisely because of high-altitude ‘traffic’.

«The head of the Nepalese tourism office Danduraj Ghimire has defined” meaningless “the rumors according to which among the causes of death of the climbers could be the overcrowding of the summit and the very long times, up to two hours of queue, to reach the summit – reports Ansa – However, according to experts, the hypothesis is not entirely unfounded, especially as altitude sickness is already the leading cause of death. At a height of 8,848, in fact, each breath contains a third of oxygen compared to that found at sea level. Furthermore, the human body deteriorates more rapidly and can survive at those altitudes only a few minutes ».

In the picture you can see hundreds of people in the known point, according to the author of the shot, as “the area of ​​death”. The last last victim, Friday 25 May, was the English Robin Fisher of Birningham. “He was afraid of overcrowding, so he changed his plans and moved the date of the climb:” I’m sure going on the 25th will mean finding fewer people, unless they all do the same calculation, “Robin Haynes Fisher wrote on social media , 44, before facing the ascent of Everest – writes Corriere della Sera Instead, his awareness that the delays caused by overcrowding could be fatal did not save him. He too died from lack of oxygen: the tank supply was not enough, as has already happened to nine other people who, in line to wait for their turn to reach the summit, they ended up in deficit and were left without life. Local guides believe that it is precisely the waiting in the queue that causes the victims to suck up the limited supply of oxygen to the mountaineers and expose them longer to strong winds ». Fisher died about 150 meters below the summit, trapped in the long queue for the diasa.

Everest climbing for many mountaineers remains only a mirage especially for the expense: the 11,000 dollars are in fact only for tourist rights but the cost for the climb varies from $ 35,000 to $ 60,000, and sometimes reaches up to $ 100,000 per person , because in addition to the climbing permit includes a guide and porters, food and other insipensabile things. To this must also be added the very high cost for a life insurance that can cover the costs of rescue and recovery of the body in case of death. Otherwise, in the event of death, there is also to pay this!

Pikey Trek (4065 m), located in the Everest region of Nepal, is one of the non-tourist ecological trekking routes in Nepal. Pikey Trek offers breathtaking views of sunrise and sunset in good weather. The trail goes through some of the most beautiful unique settlements in the Everest region. The trail starts in Bandar and crosses the village of Goli, the summit of Taklung Pikey, Lamajura, Junubeshi and ends in Bandar. Pikey takes its name from the deity of the sherpa ethnicity. A good time to take a trip to Pikey during the month of July; the locals organize celebrations to worship the clan god, the eastern Chyabo Pikey, as Pikey Hlapchen Karbu. There are other interesting possibilities to undertake tourist activities in Pikey such as paragliding, mountain biking, bird watching, pilgrimage and meditation. The Pikey Danda is very popular for its sunrise and sunset views and you can enjoy the magnificent view of the peaks beyond the Kathmandu valley to the plains along with the Himalayan mountain range. Everest, Makalu and Rolwanling.

THE BASIC FIELD HISTORY AT 5200 METERS

Everest Base Camp was first used in the 1924 Everest British expedition. The site has a couple of permanent structures and a small military base. It is called Mt. Qomolangma Base Camp and is located at 5200 meters above sea level. It is not accessible by car: all vehicles must stop at the tented camp a few kilometers after the Rongpuk monastery. From here passengers must walk or take a bus to finish the last 4 km. The ascent is gentle and the difference in height is less than 200 m. Along the way we pass screes, jagged ridges and vast glacial valleys that flow with muddy water. At about 1 km uphill from the tent, on the left, there is a Guru Rinpoche meditation cave. The resident monk will allow you to enter the cave and the small chapel.

THE HIGHEST TREKKING IN THE WORLD AT 6500 METERS

The expedition crosses the Tibetan highlands becomes more exciting in the advanced base camp of Mount Everest (north side) through a trekking route in Tibet which is located at 6500 meters above sea level and is therefore the highest in the world. It is easily accessible even for a non-climber, with simple climbing equipment and minimal mountaineering skills. The 22 km trek starts from Everest base camp (5200 m) and continues from the Rongbuk monastery with a duration of about 4-5 days. Hikers move upward along the hills next to the Rongphu glacier. Tourists are able to appreciate the particular shape of the glaciers and then reach the intermediate field (5800 m) and continue upwards passing the East Rongphu glacier to the final destination.

THE RECORD OF A SHERPA: 24 TIMES ON THE TOP

A Nepalese sherpa has reached the summit of Mount Everest for the umpteenth time setting the record of 24 climbs with its second ascent in the same week is already thinking of another climb before retiring. His name is Kami Rita, he is 49 years old and once again reached the summit of 8,850 meters (29,035 feet) on the traditional south-east ridge, said Mira Acharya, an official of the tourism department.

“I’m still strong and I want to climb Sagarmatha 25 times,” Kami told Reuters before leaving for his 23rd ascent, referring to the Nepalese name of Everest. Two other climbers, both sherpas, have climbed Everest 21 times each, but both have now withdrawn from mountaineering. The route was inaugurated by New Zealander Sir Edmund Hillary and sherpa Tenzing Norgay in 1953 and remains the most popular snow trail leading to the highest point on Earth. 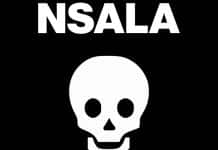