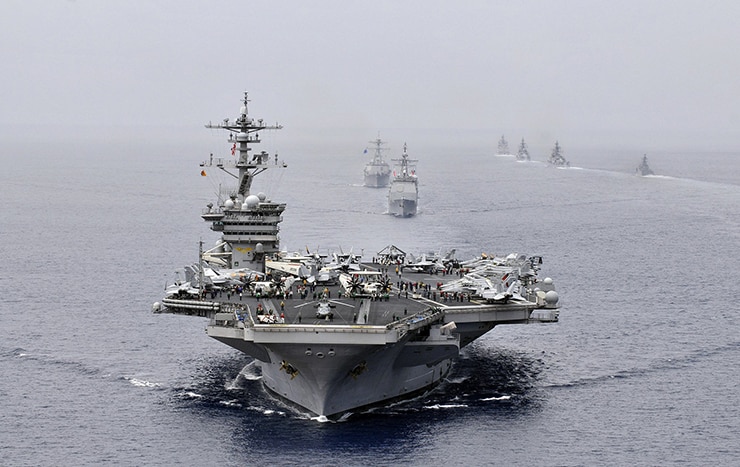 [ Editor’s Note: Mr. Sheikh has a good review of the current Gulf State disunity, where the Saudis and the UAE are trying to lead the rest by the nose with mixed results.

The Saudis, with their use of mercenaries in the Yemen war, have not figured out how that revealed them as really having no military at all, but a pretend-a-one. Their aversion to taking casualties, what slave mercenaries are for, has put their paper tiger status in plain view.

Hence, that helped trigger the US’ recent show of force in the Persian Gulf, but one where the carriers stayed out to sea, to the benefit of everyone.

Egypt has pulled out of the Arab Army farce, after having been a member in name only, due to the huge loans from the Gulf that have kept Egypt financially afloat — loans it will never be able to repay.

The Gulf State thrones want someone else to fight and die for their issues. The Israelis, for example, will fight to the last American, as Gordon loves to say. Have we become Israel’s mercenary force, but worse – they don’t pay us, we pay them? … Jim W. Dean ]

Tensions have been rising between the US and Iran after the former introduced ‘toughest sanctions’ on Iran a few months ago to cripple the latter’s economy.

In past few weeks, tensions have increased in the wake of some incidents in the Persian gulf where some oil tankers were ‘attacked’, leading the US and its allies to quickly blame Iran for sabotaging the regional oil trade.

Without mincing words, this is a build-up towards hostilities, a scenario in which the US and its Middle Eastern allies are taking a lead. Its most recent manifestation is the latest Arab Summit held in Saudi Arabia, where the GCC countries sat together to jointly ‘condemn’ Iran for it’s alleged actions in the Gulf.

The joint communique issued after the summit has seemingly categorically criticized Iran, giving a semblance of ‘unity’ within the Arab world against Iran. But a closer look reveals that this unity stands on very shaky grounds both inside and outside of the Gulf.

A bedrock of the Trump administration’s Mid-East policy vis-à-vis Iranian regional expansion in the last two years or so has been the Middle East Strategic Alliance (MESA). This strategic alliances includes, or proposes to include, a number of regional Arab countries, including as big military powers as Egypt.

MESA, however, received a major internal blow few weeks ago when Egypt quietly left the alliance, citing its disagreement with Saudia and probably the US over the way they see Iran. Egyptian leadership, unlike that of Saudi Arabia and the UAE, does not see Iran as a regional security threat.

With Egypt out, MESA is left with zero credibility and capability to establish facts on the ground vis-à-vis Iran unless it is to include either US forces or Israeli ones. The possibility of the latter, given the internal dynamics of the Muslim world and the general anti-Israeli sentiment, looks grim, although covert presence and operations cannot be ruled out.

But as far as Egypt and Saudia are concerned, Egypt’s exit indicates that it has an all together different approach to what may constitute a real regional threat, as it remains concerned about Jihadi outfits that continue to operate across the region.

Egypt, however, is not the only power that is openly or implicitly opposing a military solution to the Iran deadlock. Iraq has also made it clear that it would oppose any sort of aggression against Tehran. Its president, Barham Salih, told leaders at the Arab summit that the security and stability of Iran is “in the interest of Muslim and Arab states”, adding that he hopes Tehran’s “security is not targeted”.

Within the Gulf, Saudi Arabia’s relations with Qatar remain cold and the Saudi blockade remains very much intact. Although Qatar did participate in the Gulf summit on Iran, the fact that Qatari emir himself was absent is telling enough about the internal divisions within the Gulf and how these divisions are likely to work against Saudi plans than help materialise them.

In fact, this very summit has become a scene of the very unresolved Qatar-Saudi tussle. Saudi Arabia, a country in need of ‘unity’ in its ranks continues to look upon Qatar as a dog in the manger. Saudi Arabia’s Foreign Minister Ibrahim al-Assaf reiterated that the only solution to the Gulf crisis is if Doha returns to the “right path” i.e., starts obeying Saudi Arabia and ‘bends the knee.’

Saudi Arabia’s Minister of State for Foreign Affairs Adel Al Jubeir directed criticism at Qatar during his recent press conference in Riyad. Al Jubeir, who was removed from his previous post of foreign minister following the brutal murder of journalist Jamal Khashoggi in the Saudi Consulate in Istanbul last October, urged Qatar to ‘stop supporting extremists and terrorists and return to the fold.’ Lulwa Al-Khater, spokesperson for Qatar’s Ministry of Foreign Affairs, describing Al Jubeir’s remarks as “regrettable irony”.

“[Al Jubeir] began by the need for reunification of visions, the Arab and Gulf ranks, and then attacked the State of Qatar, wondering how the two things are right,” she said. A cold Saudi reception meted out to Qatari delegation in GCC summit only added to the underlying tensions between the two countries. So much for the ‘unity’ that the Saudis need to tackle Iran!

Extensive diplomatic tours by Iran’s FM and deputy FM in last few days strongly indicate how Iran is working in the same direction. Iran, therefore, is the only in this crisis who benefits from these divisions, the Saudis and the rest, including the US, must face these divisions before a joint strategy against Iran can be agreed upon, let alone implemented—again, prospects of which are bleak.