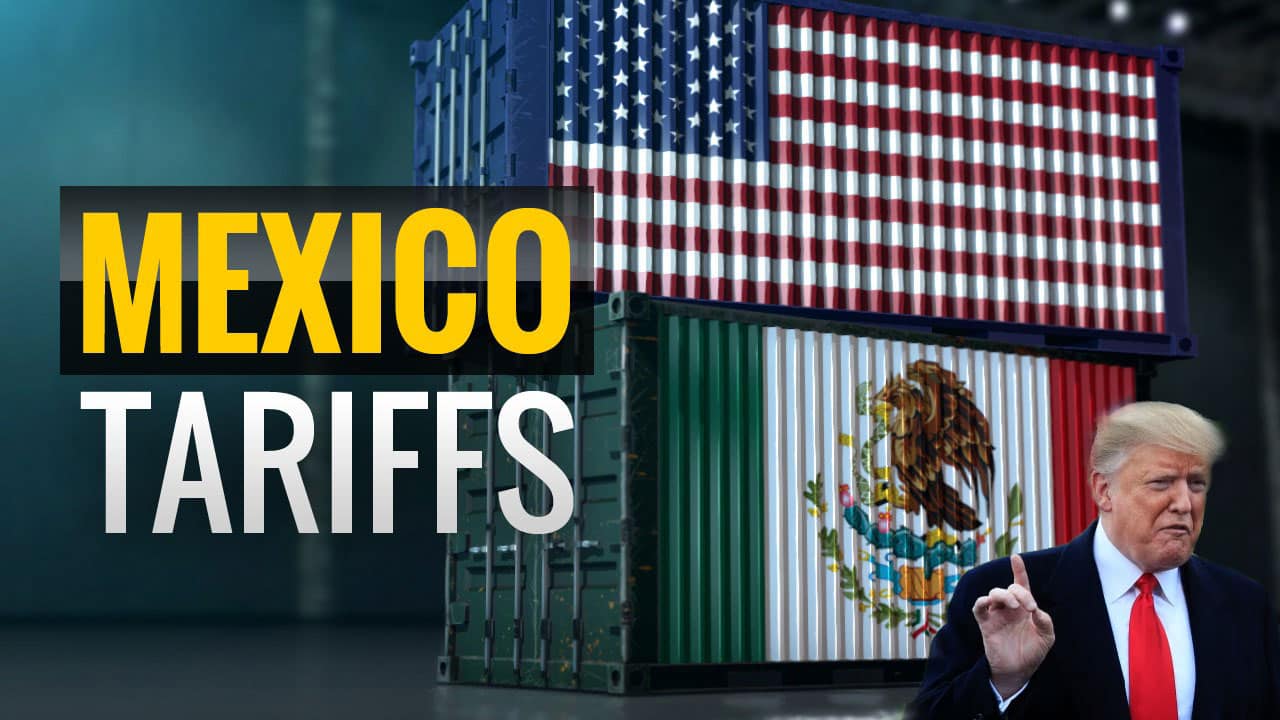 Last Friday, Donald Trump announced he would use the tariff card to get Mexico to help him with his immigration agenda. To get them on board, he announced a fast moving escalating scale of taxes on all products coming from Mexico to be paid by U.S. Importers as follows;

Now the Trump statement did NOT come with metrics. It was just an open ended ….if they don’t help then we will punish them. No one exactly knows what that means. Nevertheless, his action did get the attention of Mexico. They sent their reps to D.C. to “talk”. It’s happening right now as I write so we don’t know the outcome of these “talks”. So stay tuned for updates.

Historically Mexico has “bent over” for the more powerful USA. Most countries did. But in 2019, Mexico is NOT the same country dominated by the USA in the last century. This “new” Mexico started in 2000 when democracy’s arrival changed it dramatically. Previous to 2000, its only trading partner was basically the USA with few others trailing. They only had 4 car companies selling in the country; GM, Ford, Nissan and VW and limited products available to its citizens.

Most Mexican products were inferior due to lack of trade. The banks offered NO credit. It was at an economic standstill. But in 2019 everything has changed.

Mexico is now the # 1 YTD trading partner to the USA with U.S. importing back products mostly assembled for U.S. companies in Mexico. Mexico now has virtually every car company in the world selling its cars to new modern consumers.

The middle classes are growing. Credit is available from international banks that back the local banks Banamex (Citibank USA), HSBC (China), ScotiaBank (Canada), Santander (Spain) and more. And China has been bringing its products to Mexico since the 2000’s changing the Mexican market in a very dramatic way. Let’s just say that I just bought Chinese tires in Mexico for half the cost of American made Goodyear tires. So no, this is NOT the same Mexico.

Well, if I were Mexico, I would already have deals in place to sell all my products to other countries. Then I would speak with Trump about his aggressive gambit. That would bring them great leverage. I mean, if Trump is screaming we are going to charge you 25% to bring your products into USA making them less competitive, then I would respond that all my products have already been sold to China and I am sorry but…. NO SOUP FOR YOU! Being that 1/3rd of all food for American citizens come from Mexico, that would scare him and the U.S. public to starving death.

Now, I don’t know if Mexico has taken this position yet but this is exactly what they should have been doing since Trump took office. I mean, it was clear he was going to hit hard at them when he first called the Mexican people “rapists…” He telegraphed. They should know this and should have the plan already in place.

Truth be told, it’s unlikely they can take such a position because so many U.S. Companies control the assembly process that it may be practically impossible.  Let’s see what Mexico says at the “talks”.

But what is actually really going on here is Trump’s 2020 Election. He needs to show his base he is doing something and the current wave of Central Americans seeking asylum is causing him real concern with re-election. So he needs something here. And he decided, this was his best move.

Now, lets get real. USA is NOT a victim and neither is Trump. But he’s playing that up big time and it’s resonating with his TrumpBots and his media channel at Fox GOP News. The propaganda is affecting the victims; namely the Fox GOP News viewers. Without question, they are buying in hook link and sinker. We can tell by all the comments left by their devotees on the Fox Trump GOP News YouTube Channel. They are loving the blame game antics calling for all kinds of condescending ignorant nasty treatment of people from Mexico.

Let’s get our facts straight and think about this rationally.

Now you want truth? Can you handle the truth?
OK here you go…

We are so Full of $hit

For decades, we ALL KNEW the undocumented roofing and drywall guys were building our American Dream Homes. But we looked the other way because we were greedy. We paid them less with no benefits and no path to legal work permits giving them status. So they used fake social security cards and made their employment tax payments while never getting any social security benefits. We profited. We didn’t care! Stop lying! You knew! You didn’t care! No one cared!

Then BOOM 2008 RECESSION hits and all of sudden these hard workers are the cause of our pain and now we “hate” them? But they built our American Dream Homes didn’t they? But still we blame and rant like spoiled children while professional exploiters like Trump and his media feed our ignorant fear laced fires. Shame on us!

We Are ALL Liars

We lie to ourselves and pretend we had ZERO to do with it. Turns out we are the uber predators. The world sees us now for who we are even when we look in the mirror and play this irresponsible blame game while we willfully taking our drugs feeding our addictions. Shame on us.

Take Responsibility!  To fix this, we don’t need tariffs. We need to give ALL 15 MILLION undocumented victims of our greed work permits and a path to citizenship NOW!

Then we need comprehensive immigration reform that will allow all workers a chance for a work permit. This will get them above board and paying taxes.  Every human being needs to be above board.  It is the right thing to do and also the smart thing to do.

Then we need to INVEST in Central America to help re-build the economies and institutions we destroyed in the 70s and 80s as we raped their resources for profit causing their economies and societies to fail. We need a Marshall Plan for Central America! That’s the real investment that will stick for a very long time not this tariff non-cents.

Finally, we must switch gears from this BLAME GAME to TAKING RESPONSIBILITY immediately before it’s too late. The USA cannot survive racism and hate from within and projecting it out to other countries expressed in the form of a trade war just to satisfy the manipulated Fox GOP News mob. It will fail. We need cool calm serious heads and we need it now!

Bottomline: Nothing will get fixed until we fix ourselves. Period!