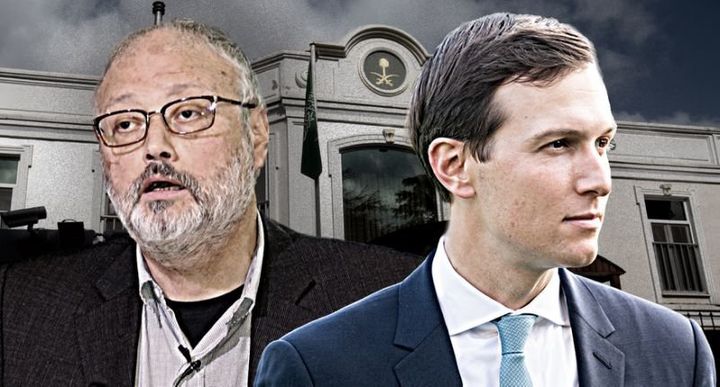 If you think that Jared Kushner has shown some signs of moral responsibility in the Middle East, then think again. This man has basically declared that terrorism is terrorism if and only if he approves it. End of discussion.

What has the mad man recently said? Fasten your seatbelt. Jamal Khashoggi, says Kushner, “was the link between certain factions in the royal family and Osama. We know that. A journalist? Come on. This was a terrorist masquerading as a journalist.”

The evidence? Well, “We know that”! Who’s “we”? Jared Kushner himself—and almost certainly Donald Trump and the Saudis, the very cabal who perpetuated the crime in the first place. Khashoggi was a Washington Post columnist. What Kushner ends up saying is that the Post was stupid because they were not able to detect that Khashoggi was a secret terrorist.

The sad thing is that Kushner and indeed the entire Trump administration give the impression that they are fighting terrorism! It’s just plain silly. The Jewish Daily Forward itself was able to figure that out last year:

“Trump and Kushner’s willingness to allow the Saudis to investigate their own suspected torture, slaughter and dismemberment of a Washington Post columnist is in keeping with the morality-free government the two have brought to the White House.”[2]

The New York Times quoted Kushner saying that the murder of Jamal Khashoggi “will pass, just as it did after other Saudi errors like the kidnapping of the prime minister of Lebanon and the killing of a busload of children in Yemen.” The Times later retracted the statement, but it seems pretty clear again that the Trump administration is an accomplice in the death of the journalist. The Jewish Daily Forward moved on to say:

“Kushner showed the same grim, obtuse nihilism in his treatment of the Palestinians. In defunding the Palestinians’ only safety net, UNRWA, Kushner callously argued that “sometimes you have to strategically risk breaking things,” and directed “an honest and sincere effort to disrupt UNRWA.”[3]

As I pointed out last year, Kushner and Trump’s duplicitous activities with the Saudis and Israel inexorably put them in a position where the moral and political law is no longer valid. The CIA concluded that Saudi Crown Prince Mohammad bin Salman gave the license to murder Khashoggi,[4] but there is no doubt that Salman got Kushner’s “kosher” blessings. In that sense, Kushner is making a terrorist state—Saudi Arabia—great again.