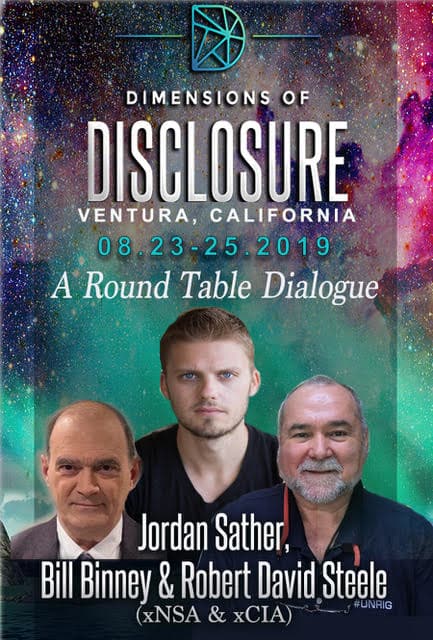 BIll Binney, my NSA counterpart (I am to CIA as he is to NSA) and I have agreed to speak to the Dimensions of Disclosure event in Ventura, CA 23-25 August 2019. While most of the speakers focus on extra-terrestial and spiritual disclosure, Bill and I and Sacha Stone are there to bring them all down to Earth by discussing what’s truly going on behind  the scenes of the Deep State and the Shadow Government.

Below are our tentative speaking topics, and a starter list on what needs to be disclosed.

Topic 1: The Ultimate Hack: Re-Inventing Intelligence to Re-Engineer Earth
Topic 2: I am Not Q — But If Was, This Is What I Am Predicting….

Disclosure Priorities List to Be Woven In (Now in Alpha Order):*


* This list will be deconflicted with the event organizer,, as other speakers will cover some topics in depth, for example, Sacha Stone on 5G, Laura Eisenhower on Satanic Ritual Abuse.

I am interested in your opinion as to what should be added to this list, and what the priority should be in terms of demanding Presidential attention — for example, our President has promised to disclose the who, how, what, and why of 9/11 and has failed to do so. Our President is not being properly supported by the US intelligence community and needs to reduce what we have by up to 70%, consolidate it all in a revitalized CIA, and create the Open Source Agency that will be the ultimate disclosure engine (telling the truth about everything).

I will end on a positive note — We the People are winning, praise be to our President who is a change agent, as well as the 2012 shift and other forces now in alignment against the Deep State and the Satanists ruling the Deep State.

I can be reached at [email protected] One email per person, please, I am flooded, but in this instance, this is such a great opportunity to do some good with a speech and an article, that I seek professional help: the kind of collective intelligence only you can provide.