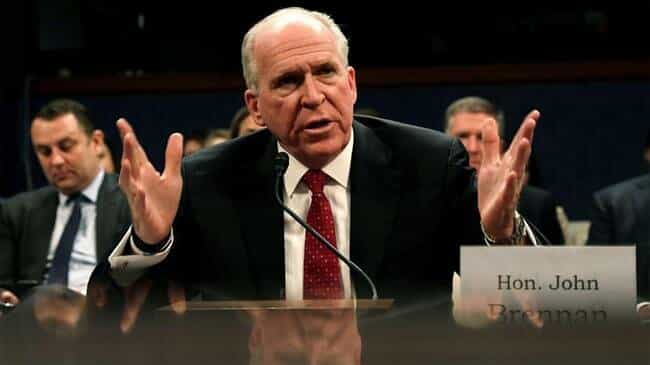 [ Editor’s Note: Brennan is not someone that the Trump regime can write off as an Iran lover, or challenge his professionalism based solely due to his being Obama’s CIA director.

VT was not a Brennan booster when he obviously was deeply involved in using the jihadis against Syria and Iraq, which has caused nearly as many deaths as the US suffered in WWII, the official numbers anyway. Neither Iran nor Syria has attacked the United States in retribution.

But Brennan did play a key role in boosting the JCPOA in his capacity of having to brief Congress on Israel’s endless mantra than Iran was just a hop, skip and a jump from having “da bomb”.

The IAEA inspections have repeatedly confirmed that Iran has not broken the agreement, whereas Israel has failed over and over to prove its Iranian nuclear threat claims, despite its vaunted Intel reputation which included, many say, knowing everything that the US does about Iran.

Yes, it is not a usual thing for a past administration’s CIA director to be a harsh critic of the sitting president. But Trump and his mob lost no time in trashing the competence of the entire Obama administration, including Brennan.

Trump put his team in play, and Brennan owes them no professional courtesy. Trump is reduced to school yard name calling. Just check out the terms he uses when he’s upset, eighth grader level stuff, “He’s a loser, and I mean really a loser, a real loser.”

Former CIA director John Brennan says the US President Donald Trump administration’s policy of pressure against Tehran is a failed policy because there is “a culture of resistance” in Iran.

In an interview with The Irish Times newspaper published on Saturday, Brennan said the Trump administration has been moving down a “cul de sac” with its policies toward Iran.

“The United States has gone down this cul de sac with Iran, by putting pressure on the regime, in the false belief that they will change. It’s a culture of resistance in Iran,” he said.

He referred to some of Trump’s policies specifically.

“By reneging on the Iran nuclear deal, by designating the IRGC as a terrorist organization, by tightening sanctions on Iran and forcing European parties to the agreement to renege on their obligations, the perception in Iran is that the Trump administration ultimately wants to overthrow the regime,” Brennan said.

Since taking office in 2017, Trump has taken a progressively bellicose posture toward Iran. A year and a half into his term, he unilaterally withdrew the US from an international nuclear deal with Iran — the JCPOA — and imposed sanctions against Tehran. He then began pressuring the other cosignatories, including European states, to also abandon the deal.

Furthermore, Trump appointed as close aides a coterie of individuals known for their acrimony toward the Islamic Republic. Those figures, who include National Security Adviser John Bolton and Secretary of State Mike Pompeo, in turn worked to reinforce the administration’s anti-Iran posture.

In his interview, Brennan singled out Bolton and Pompeo as “Iran zealots.”

In May, the US announced highly provocative plans to dispatch military reinforcements to the Middle East, including an aircraft carrier strike group and a bomber task force, citing an alleged, unspecified Iranian threat.

At the same time as taking those anti-Iran measures, Trump has also offered new talks with Tehran. At different times, his administration has offered talks with or without preconditions.

Iran has rejected the preconditions and has said offers of talks do not go with threats and pressure.