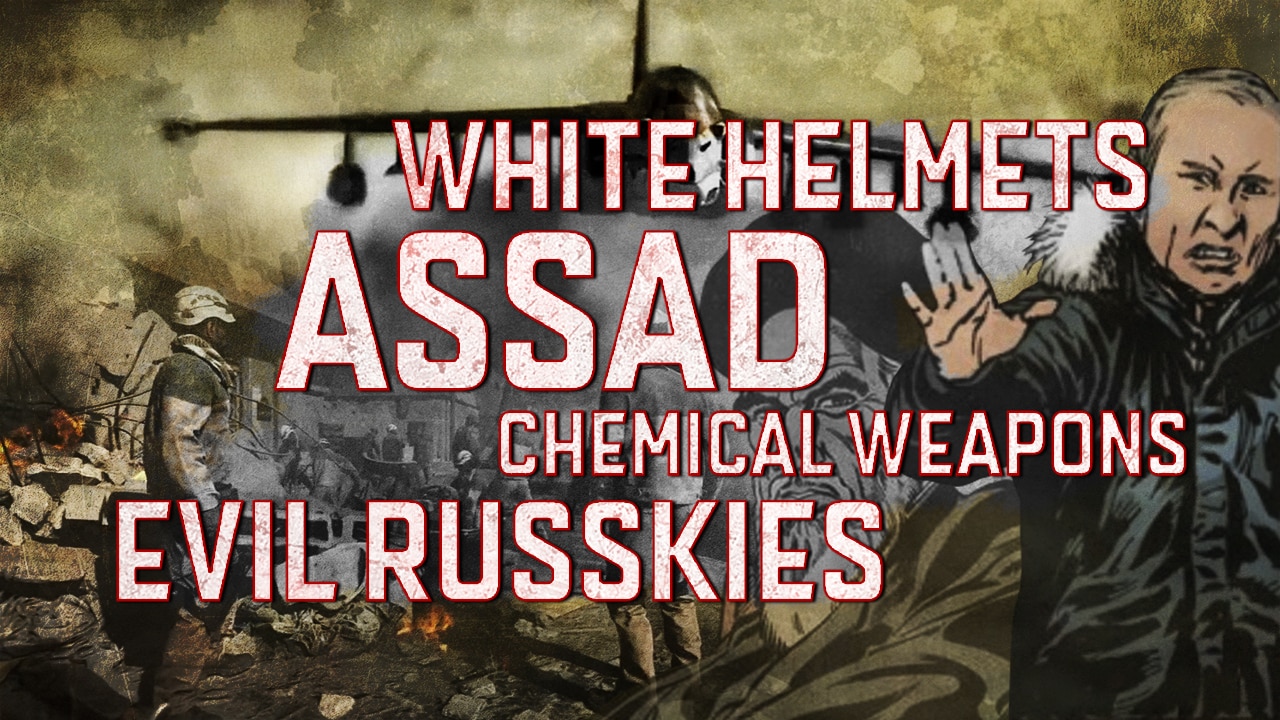 Since the formal defeat of ISIS’ self-proclaimed caliphate and so-called “moderate rebels” in most of Syria, the Middle Eastern country, has largely disappeared from the front-pages of mainstream media outlets. Nonetheless, the narrative management operation to distort the real situation in the war-torn country and demonize the Damascus government and its allies fighting foreign-backed radical militant groups continues.

The upcoming Call of Duty: Modern Warfare is an obvious example of the scale and spread of this campaign. The official trailer for the new part of the franchise features “heroic actions” of the White Helmets, “big bad Russians” bombing civilians and a kid in a gas mask apparently signaling the expected usage of “Assad’s chemical weapons” mantra in the story-telling.

The description of the first missions of the coming part of the world franchise reveals that they will incorporate Russian soldiers laughing while killing civilians as well as using chemical weapons against civilians. So, a “Bana al-Abed”-styled girl will have to kill some “evil Russkies”.

It appears that the goal of this effort is to bring back into attention some propaganda narratives that appear to have, at least partially, died down in recent years under pressure of facts. It’s an open secret that the White Helmets have deep ties with Hayat Tahrir al-Sham (formerly the official branch of al-Qaeda in Syria) and other radical groups de-facto playing a role in their propaganda wing and participating in staging chemical attack provocations.

The Twitter account of Bana al-Abed became widely known during the battle for Aleppo in 2016. The account operator, using the name and photos of the then 7yo girl, was writing scripted tweets blaming the “Assad regime” and Russia for civilian casualties, spreading fake news and even calling to start a new world war if that’s what’s needed to rescue what the account described as “innocent civilians”. After defeat of the radical groups controlling her part of the city, Bana and her parents withdrew from Aleppo alongside other members of militant groups that had reached a surrender deal with the Damascus government. Later, she and her family appeared in Turkey where Bana’s image continued to be used as a tool of the ongoing campaign against Syria. Her case is a sad example of how kids are being used for war propaganda purposes.

An interesting fact is that the “Call of Duty” game writer is not even hiding that the mainstream video game franchise seeks to indoctrinate its users. Taylor Kurosaki said that “he wants “Call of Duty” to be spoken of as on par with the best war films, and he hopes ‘Modern Warfare’ will inspire fans to check out the harrowing and eye-opening documentaries ‘The White Helmets’ or ‘Last Man in Aleppo”.” It’s no surprise that both mentioned “documentaries” were designed to glorify the White Helmets and militant groups they were assisting by their work and had little in common with the real situation in parts of the country, including, at some point, eastern Aleppo, controlled by MSM-promoted “moderate rebels”.

However, the latest Call of Duty: Modern Warfare game, underlined a tendency that is by no means new. In some cases, modern video games, movies and even comic books are infested with war propaganda even more than news pieces released by CNN and similar media outlets.

Even DC comics, in late 2018, in its Doomsday Clock crossover with Watchmen showcased a superhero from Syria, called Sandstorm, who could control the desert sands. The generic stereotype boy called Nabil Azmah was from Douma, which isn’t even in the desert. He was later killed in the comics, fighting against the “Assad regime.” According to his fictional biography, his family were killed by fighters allied to Assad and his sister was gassed.

To top it off, in the next issue, Russian President Vladimir Putin was portrayed as the bad guy and even picked a fight with Superman, after a US superhero – Firestorm – democratically turned Russian citizens on Red Square into glass.

These tendencies are nothing new. DC comics, in the 80s, portrayed Iran’s Ayatollah Khomeini, who concludes a deal with Batman’s infamous enemy the Joker. The Joker then says that Iranians and him have a lot in common, namely “being insane.”

The mainstream entertainment industry is doing its best to “inform”  American youth of who the “good guys” are in Syria and around the world, even if these “good guys” accidentally appear to be members of al-Qaeda.

This situation is a demonstration of how little propaganda capabilities Syria, Venezuela, China, Iran or Russia really do have in comparison with their “Western partners”. In most cases, the US and the EU use bogeyman stories about the mighty Russian, Chinese, Iranian and even Syrian propagandists as formal justification to tighten censorship and to increase their own propaganda efforts.