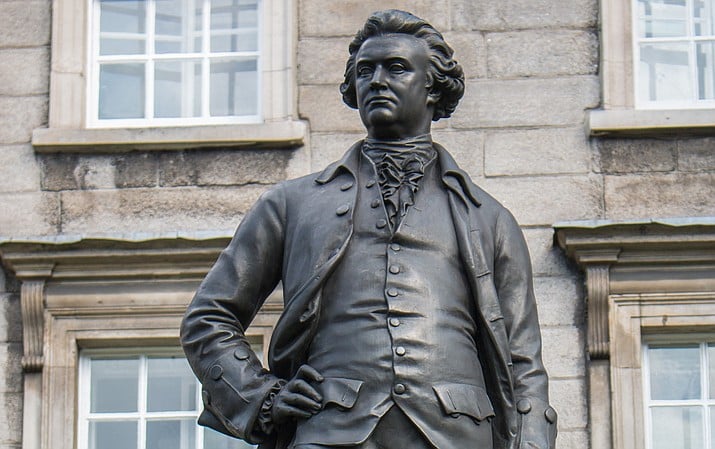 …by Phil Giraldi, via Unz Review

But this time the horse is paid for by Israel

[ Editor’s Note: Phil puts the spotlight on what some astute observers might consider yet another Israeli front group setting up in Washington, DC, this one borrowing the esteemed Edmund Burke’s name as PR cover.

Mr. Giraldi does not even have to break a sweat to lay bare the Israeli hasbara operation, as those folks don’t have to cloak what they are doing. They know they will get no negative corporate media coverage, as they have friends that know how to discourage such media independence.

“Israel First” Americans, especially politicians, will have a short ride to the Edmund Burke Foundation speakers podium to embarrass traditional Americans under a conservative national flag. That they will be doing this under a “nationalism” cover is actually kind of funny, showing that they at least have a sense of humor.

Gosh, I have a whiff of an election-influencing operation in my nostrils. How about you? Let me know how you feel in the comments… Jim W. Dean ]

A new pro-Israel group that is pretending to be a standard bearer for conservative opinion in the United States was founded in January, a fortuitous bit of timing as it will not have to reveal its sources of income until next year.

The Edmund Burke Foundation describes itself as “a new public affairs institute” having “the aim of strengthening the principles of national conservatism in Western and other democratic countries. The Foundation will pursue research, educational and publishing ventures directed toward this end.”

The Foundation’s launch will be at an open-to-the-public conference that will be held at Washington’s Ritz-Carlton on July 14-16, 2019. So as not to confuse the possible audience unduly over who Edmund Burke was or what he stood for, the conference is being advertised somewhat lamely as “National Conservatism: A Conference in Washington D.C.” on its website nationalconservatism.org.

Note that neither the name of the foundation nor the promotion of its stellar cast of speakers includes the word “Israel,” but the Jewish state is really what it is all about.

“Politics in America, Britain, and other Western nations have taken a sharp turn toward nationalism—a commitment to a world of independent nations. This has been disorienting to many, not least the American conservative movement, which has, since the fall of the Berlin Wall in 1989, grown increasingly attached to a vision of a global ‘rules-based liberal order’ that would bring peace and prosperity to the entire world while attenuating the independence of nations.

“The return of nationalism has created a much-discussed ‘crisis of conservatism’ that may be unprecedented…The conference on ‘National Conservatism’ will bring together public figures, journalists, scholars, and students who understand that the past and future of conservatism are inextricably tied to the idea of the nation, to the principle of national independence, and to the revival of the unique national traditions that alone have the power to bind a people together and bring about their flourishing.”

It is obvious to most actual conservatives that nationalism has never really gone away, but what the conference organizers are really getting at is a revival of unabashed nationalism as the excuse for countries when they behave badly while promoting their own interests without regard for the interests of others.

Israel and the United States are the prime examples of such behavior and the argument that they have a special entitlement to justify their actions is frequently made, most notably by other Israel-firster groups like the Foundation for Defense of Democracies (FDD).

FDD argues that democracy promotion by force is a legitimate foreign policy of powerful countries like the United States, while threatened democracies like Israel must be protected.

That, of course, is a complete misrepresentation regarding just how democratic the two countries actually are and the idea that being democratic empowers some sort of leadership role or exempt status is in itself ridiculous.

Why do I suggest that the Edmund Burke Foundation is just another pro-Israel puppet? Look at the people running it. Its President is David Brog, who is also the executive director of the Maccabee Task Force, “an effort launched in 2015 to combat the anti-Israel BDS movement.

He also sits on the Board of Directors of Christians United for Israel (CUFI), were he served as executive director for its first ten years. Before CUFI, Brog worked in the United States Senate for seven years, rising to be chief of staff to Senator Arlen Specter and staff director of the Senate Judiciary Committee.

He has also worked as an executive at America Online and practiced corporate law in Tel Aviv, Israel and Philadelphia, PA. Brog is the author of Standing with Israel: Why Christians Support the Jewish State (2006) and In Defense of Faith: the Judeo-Christian Idea and the Struggle for Humanity (2010). In 2007, the Forward newspaper listed Brog in its ‘Forward 50’ most influential Jews in America.”

The Edmund Burke Foundation’s Chairman is an Israeli Yoram Hazony, who describes himself as a “Jewish philosopher.” He resides in the Jewish state and is a well-known Israeli nationalist, having written that nationalism empowers “the collective right of a free people to rule themselves.”

He declares that “We should not let a hairbreadth of our freedom be given over to foreign bodies under any name whatsoever, or to foreign systems of law that are not determined by our own nations.” He adds “My first concern is for Israel.”

In other words, for Hazony all external criticism of what Israel is and does is illegitimate while Brog is what might be described as someone who has made a career out of being Jewish, along the way advancing what he perceives as Israeli interests. So why are they heading an ostensibly American foundation?

Indeed, it doesn’t require a Trumpean level of genius to see what this is all about and where it is going. If there is an unfortunate development arising from the National Conservative conference it is the inclusion as speakers of some genuine conservatives among the crowd of usual Zionist hacks, with National Security Bloviator John Bolton leading the dark side of the list.

The real conservatives, who are invited to give the event credibility, should know better and ought to avoid the Edmund Burke Foundation like the plague. I will not call them out by name here and now but they can be identified from the speakers’ list. One has to wonder if they are being paid for their services…

In fact, new organizations dedicated to defending and promoting Israel are not exactly unusual. They tend to pop up in the United States and Western Europe like wild mushrooms in the spring time. By one estimate, there are 600 such organizations in the U.S. alone, running the gamut from the liberal left to the conservative right.

They exist because there is a certain paranoia on the part of prominent Jews and leading Jewish organizations due to fear that the American people are finally waking up to the fact that they have been getting used and abused by a vast Zionist conspiracy for the past 70-plus years.

Why do some American Jews betray the interests of their own country to support another nation that is manifestly a pariah due to its own behavior? It might just be because to do so is painless and can, on the contrary, lead to personal advancement.

Brog’s career demonstrates how it works, particularly if one can latch on to a Jewish Zionist Senator like Arlen Specter along the way.

And the benefits for Israel are enormous, amounting to hundreds of billions of U.S. Treasury dollars as well as a de facto commitment for American soldiers to fight and die for Israel even if Israeli Prime Minister Netanyahu starts a war for no reason whatsoever.

Taken together, all of the pro-Israel groups constitute a veritable political juggernaut that seeks to advantage Israel and benefit it directly without regard for the damage done to American democracy and to actual U.S. interests.

They should rightly be seen as organizations that regard their loyalty to the United States as negotiable, but they try to obfuscate the issue by claiming, wrongly, that there exist compelling reasons why Israel and the U.S. should continue to be best friends due to “shared values.”

And, as self-defined leading democracies, the Israel-apologists argue that both are immune to criticism because they are acting on the basis of legitimate nationalist interests.

It is a compelling argument for some, but ultimately false in that it suggests that there are no restraints on the behavior of either government. The Israelis have, for example, used the argument to justify the killing by army sniper fire hundreds of unarmed Palestinian demonstrators.

Promoting “democratic nationalism” to pander to Israel without any real understanding of actual interests has led the United States into a seemingly bottomless Middle Eastern quagmire.

And, the sense of invulnerability that America’s uncritical support has encouraged among some Israelis also will not benefit the Jewish state in the long term. The creation of the Edmund Burke Foundation is just one more card in a losing hand and it hopefully will run out of steam as abruptly as it was created.