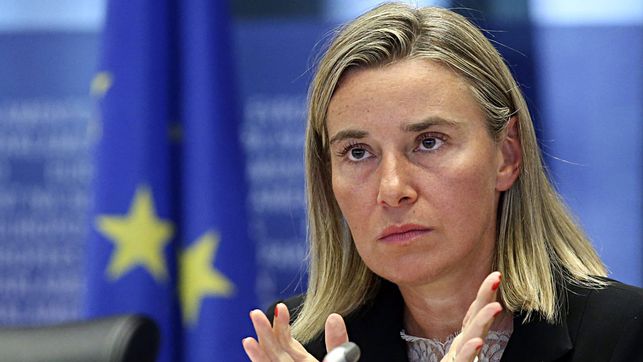 In a beautifully crafted letter they express the outrage felt throughout the world, and especially in European countries including the UK, at the EU’s policy of rewarding the war crimes and crimes against humanity committed by Israel. Each new act of unspeakable brutality, each new onslaught of disproportionate force against civilians brings fresh privileges, fresh co-operation, fresh embraces from an enthusiastic EU élite.

Perhaps the most shameful thing about Europe’s relations with Israel is the EU-Israel Association Agreement which came into force in 2000. This is about special trading and other privileges and its purpose is to promote (1) peace and security, (2) shared prosperity through, for example, the creation of a free trade zone, and (3) cross-cultural rapprochement. It governs not only EU-Israel relations but Israel’s relations with the EU’s other Mediterranean partners, including the Palestinian National Authority.

To enjoy the Association’s privileges Israel undertook to show “respect for human rights and democratic principles” as set out as a general condition in Article 2, which says:

“Relations between the Parties, as well as all the provisions of the Agreement itself, shall be based on respect for human rights and democratic principles, which guides their internal and international policy and constitutes an essential element of this Agreement.”

“Essential” being the operative word.

Respecting human rights and democratic principles is not optional. Article 2 allows steps to be taken to enforce the contractual obligations regarding human rights and to dissuade partners from pursuing policies and practices that disrespect those rights. The Agreement also requires respect for self-determination of peoples and fundamental freedoms for all.

Given Israel’s contempt for such principles the EU, had it been an honourable group, would have enforced Article 2 and not let matters slide. They would have suspended Israel’s membership until the regime fully complied. Israel relies heavily on exports to Europe so the EU could by now have forced an end to the brutal occupation of the Holy Land instead of always rewarding it.

The signatories to the letter to Mogherini and Moedas aptly quote the warning by Israel’s own human rights group B’Tselem:

“If the international community does not come to its senses and force Israel to abide by the rules that are binding to every state in the world, it will pull the rug out from under the global effort to protect human rights in the post-WW2 era.”

Here is that excellent letter:

Re: Letter from European researchers and academics concerning Israel’s participation in Horizon Europe

We researchers and academics from Europe are writing to you in order to express our deep concern about the participation of Israel and its military companies in EU Research Programs. While we write, new Israeli raids flare up and the smoldering remnant of Gaza protesters of the Great March of Return, already forgotten and forsaken.

More than 270 unarmed civilians were killed during the March of return, including women, children and persons with disabilities and thousands more were injured [28.939, of whom 7.247 by live fire]. They were only demanding their rights enshrined in international law: end of the illegal blockade and for the right of return to their ancestral homes from which they were expelled.

A report of the United Nation’s Independent Commission of Inquiry published earlier this year concluded that the Israeli army might have committed war crimes and crimes against humanity by indiscriminately killing health workers, journalists and unarmed protesters who did not pose any imminent threats to the soldiers.

Relentless violence rages again after 11 years of inhumane siege and three military assaults that shattered the fabric of normal life. Gaza is declared to be uninhabitable by 2020 according to a report by the UN, but this “environmentally defined” deadline reflects only the intentionality of an imposed series of emergencies, followed each time by a further decrease in health, energy, food independence and commerce after each episode of armed aggression since 2007.

The hermetic siege combined with the systematic large scale military destruction is slowly strangling nearly the two million inhabitants of Gaza. None of the basic civilian infrastructure such as hospitals and power plants, was ever sufficiently rebuilt after each of the three military assaults due to severe restrictions by the blockade. Electricity is available only a few hours a day, 98% of water is not drinkable, and many hospitals periodically stop functioning due to lack of medication, spare parts of machinery, electricity and fuel.

Permission for patients to leave in order to receive life-saving treatment elsewhere has been continually declining in time. Tools for education, number of teachers, and rebuilding of schools are severely impaired. The inhabitants of Gaza have been consistently denied basic human rights and human dignity.

The disproportionate use of force on the civilians amounting to war crimes has also been systematic throughout all, long and short term, military operations, including the almost daily assaults to fishermen and agricultural workers.

These facts have been meticulously documented in authoritative reports by the UN and human rights organizations and widely condemned by the international community. Yet Israel’s policies of aggression and repression have continued.

This grave violation of human rights is thus highly profitable for Israel’s war industry disclosing another side of the claim of “only self-defense” and the interests beyond the lack of measure in the aggressions on Palestinians of Gaza.

Nonethelss, in spite of continual and serious breaches of international law and violation of human rights, and regardless of the commitment for upholding human rights of European countries, Israel enjoys an exceptionally privileged status in dealing with Europe also through the Association Agreement and has been receiving grants from the European Commission in the area of research and innovation (FP7 and its successor Horizon 2020).

Funds are granted even to Israeli arms producers such as Elbit Systems and Israel Aerospace Industries Ltd. (IAI), the producers of lethal drones that were used in the Gaza military assaults against civilians, together with numerous academic institutions that have close ties with Israeli military industry.

We appeal to the European Union to impose a comprehensive military embargo on Israel, as long as Israel continues to blatantly violate human rights. We are deeply disturbed that public funds contributed by European tax payers are channeled to a country that not only disregards human rights but also uses most advanced knowledge and technology for the very violation of human rights.

We believe that knowledge and innovation should serve progress in humanity and society, not to develop dual use or military research of a country that has a record history of grave human rights violations. This is not compatible with the values Europe upholds.

We support Amnesty International call for a military embargo on Israel issued last year following the attacks on the unarmed protesters of the Great March of Return using maiming bullets and brutal means by the Israeli army, unnecessary in that context.

Youth of Gaza appealed to you to stop funding Israeli manufacturers of weapons and surveillance system that guard their open-air prison, maimed them and destroyed their future.

In support of their outcry we call upon European Union and European Commission to suspend the Association Agreement with Israel and exclude Israel as an eligible partner for Horizon Europe (successor of Horizon 2020), as long as it refuses to comply with the rules of international law. We also share the concern of B’Tselem, Israeli human rights organization, which stated,

“If the international community does not come to its senses and force Israel to abide by the rules that are binding to every state in the world, it will pull the rug out from under the global effort to protect human rights in the post-WWII era.”

* Institutions are added for identification purposes only. All signatories have signed the letter in a personal capacity.

“Allah is great”. ISIS jihadists Insult Italian Ambassador Killed. Then Threaten: “Now US and French ones”