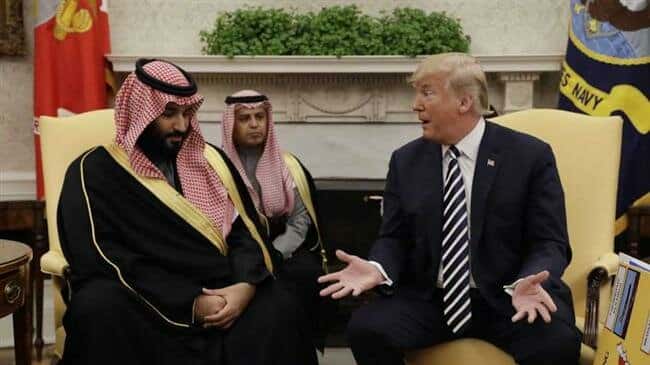 [ Editor’s Note: This is much more than the Dems getting their hooks into Trump. By charging him with a phony Iran scare to create the emergency arms sales deal to the Saudis, they are accusing the Pentagon as being an accessory, which is not a minor item.

Added to that we have already had statements to that effect by the military, maybe trying to cover their behinds, but the imminent threat con by Mr. Bolton was challenged and reported.

What needs to happen now is or the committee to bring the Pentagon in to grill it over its procedures as to how many times this has happened, invented scenarios to deploy the military, as we can assume that such slight of hand work to misuse the military was not invented by the Trump White house.

Will that happen? Probably not, as the Dems may be content to beat Trump up a bit but not really address the issue as it is a “fake government” red line.

One exposure would lead to another, and if VT is ever called to testify they would get a long list, one that would change things forever… Jim W. Dean ]

US President Donald Trump has been accused of creating a “phony” emergency to bypass Congress to approve an $8 billion arms sale to Saudi Arabia.

The White House said last month it was making an emergency provision within the country’s arms control law to enable the billions of dollars of arms sales to the Saudi kingdom and the United Arab Emirates, the US’s strongest allies in the Persian Gulf. The recourse helps the president spare congressional review for the exports.

The Trump administration had cited “alleged threats from Iran” to justify resorting to the provision.

R. Clarke Cooper, the State Department’s assistant secretary of state for political-military affairs, appeared before the House Foreign Affairs Committee on Wednesday where he was grilled over the $8 billion “’emergency” arms sale to Saudis.

Democratic members of the House committee said the president’s action violated the law because there was no actual emergency.

They also said Trump’s action shows that the United States is tolerating worst human rights abuses by Saudi Arabia in its war on Yemen.

“There is no emergency. It’s phony. It’s made up. And it’s an abuse of the law,” said Representative Eliot Engel, chairman of the House Foreign Affairs Committee.

The US has been supporting a 2015-present Saudi-led war against Yemen that seeks to bring back the impoverished country’s former Riyadh-backed officials. The American patronage has featured aerial refueling, which the US only stopped earlier in the year after the Saudi-led coalition grew independent of it, as well as logistical and commando support.

Tens of thousands have died since the onset of the war, and the entire Yemen has been pushed close to the edge of outright famine.

A year after the war was launched, Trump made his maiden foreign visit to Saudi Arabia, announcing more than $100 billion in arms sales to the kingdom.

Senate Majority Leader Mitch McConnell told reporters on Tuesday that four Republicans will join Democrats to oppose the arms sale to Saudi Arabia next week in the Senate.

Cooper, however, said the arms sales and US military buildup in the Persian Gulf were needed to counter what he called increasing threats from Iran to Saudi Arabia and the United Arab Emirates.

“These malign – even provocative actions mark a new evolution of the threat Iran poses to the security of hundreds of thousands of Americans who live and work in the [Persian] Gulf states, and to the security of the region and our partners,” Cooper said.

Democrats denounced Trump’s bypassing of Congress on the arms sale to Saudi Arabia and US support for Saudi war in Yemen.

Representative Brad Sherman, a Democrat, said, “You tell us that you want to send a message with this to our adversaries. It appears that your adversary is Congress and the message is loud and clear: ‘We will stretch every statute beyond the breaking point in order to make the Congress irrelevant to the decision-making process.’”

“The arms sales you’re talking about are controversial. There is significant opposition in Congress. And rather than confront that, you go around it,” Sherman added.

“In what ways is the United States holding Saudi Arabia accountable for war crimes it has committed by murdering civilians on multiple, multiple occasions in Yemen and causing a famine in Yemen?” asked Democratic Representative Andy Levin.

“But it is not only immoral, it is counterproductive to our national security,” Omar added.

Lawmakers had been holding up the sales amid concerns about civilian casualties in the war and fury at Saudi Arabia over its killing of US-based journalist Jamal Khashoggi in Turkey last year.

Khashoggi, a Washington Post columnist and outspoken critic of Saudi Crown Prince Mohammed bin Salman was killed and dismembered last May after entering the Saudi Consulate in Istanbul, but the US administration refused to let the murder adversely affect its Saudi ties.