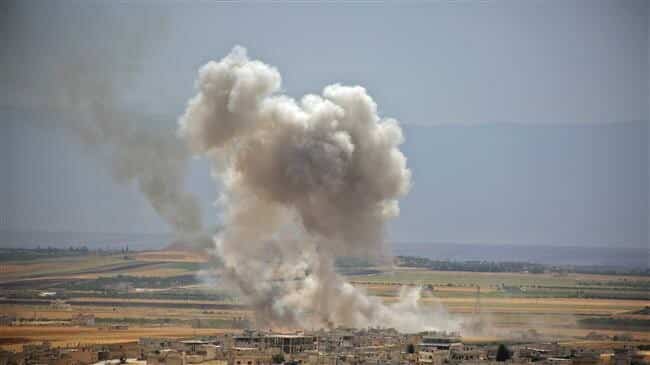 [ Editor’s Note: A triple strike night attack on the jihadi leadership was a great way to send a message that ceasefire violations are not to be taken lightly anymore.

While Russia did call Turkey to task for not doing more to separate the jihadis from the “armed groups”, Moscow did not go so far as to demand Turkey stop the flow of weapons and supplies that keep the jihadis fighting.

No one has even mentioned some kind of joint control of the Turkish border to assure that jihadis and weapons are not freely flowing over, without which the Idlib tormentors could not have been counter attacking the SAA so aggressively.

Is Turkey going to change its double dance based on a complaint? I don’t think so, and I am not the only one. So we all are waiting for when Iran and Russia together give Erdogan an ultimatum, to control the borders or they will be closed.

If this does not get fixed, the Syrian situation is going to continue to drift, and that is always a downward one. There is no “drifting up” in geopolitics… Jim W. Dean ]

Syrian and Russian warplanes have jointly carried out precision attacks against the positions of Jabhat al-Nusra terrorist group, formerly known as al-Nusra Front, in the northwestern province of Idlib.

A gathering of the terrorist group’s ringleaders at Taftanaz military airbase in Idlib was pounded three times by Syrian and Russian aircraft on Thursday night as part of a joint operation, Sputnik news agency reported.

The report said the terrorists’ hideouts in the southern areas of Khan Shaykhun, Sufuhon, Kafr Nabl, and Hass in the province were also targeted by the warplanes.

The strikes came after the militants refused to honor a full ceasefire agreement brokered between Russia and Turkey late Wednesday with the aim of halting clashes between Syrian forces and militants in the area.

That agreement put on hold a Syrian government offensive to liberate Idlib, where between 10,000 and 15,000 militants are estimated to be holed up.

Militants have persisted in their stay in the zone and refused to leave the area, launching instead numerous attacks on the outposts of the Syrian army and Russian forces. Russia and Turkey gave sharply conflicting accounts on Thursday of an attack on a Turkish military outpost.

Turkey claimed one of its observation posts in Idlib province had come under deliberate attack from Syrian forces, in which three Turkish soldiers were allegedly wounded.

Moscow said the attack was carried out not by the Syrian troops, but by militants.

Russia says it is Turkey’s duty to rein in the armed groups and help separate them from the Takfiri outfits, which form the backbone of the militant presence in Idlib.

Idlib remains the only large area in the hands of anti-Damascus militants after government forces managed to undo militant gains across the country and bring back almost all of the Syrian soil under government control.

In recent weeks, Syrian armed forces have been conducting counter-terrorism operations in areas surrounding Idlib. The Syrian army has warned civilians to leave Idlib amid preparations for a final military campaign to flush terrorists out of the region.