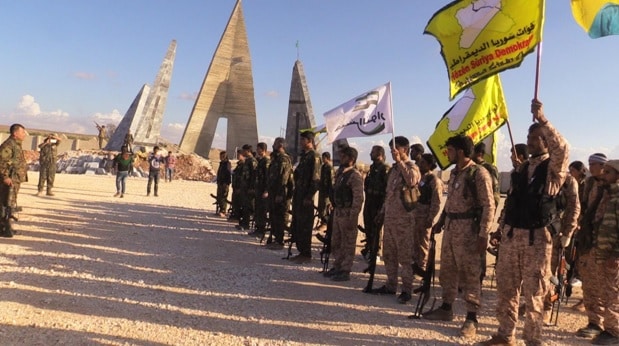 [ Editor’s Note: VT sources have confirmed that the meeting US Al-Umar Base did happen, and it was yesterday. But the story below left out some key information.

One, the Saudis brought lots of money, lots and lots of money. And second, the big Arab tribes were in attendance.

The purpose of the meeting was to buy off the tribes to form a united military front with the Kurds. If the tribes took the money, their answer was yes, and means they have cast their fate with the money bags men and not Damascus.

Assad has his hands full with a completely stalled peace process and the same or the Constitutional Committee. The US coalition seems to be betting that the Syrian people will get tired of nothing getting done and eventually blame Assad for it.

At that moment a well funded new prospective leader will appear and Syria could be dragged down into a new civil war. The Russians and Iranians will be in a delicate situation. What do they do, stay out of it or support Assad? If they do I can hear the claims of “interference” already from the aggressors.

I fear that a new form of Balkanization is being rolled out by Saudi accountants looking back on how much was blown on the Syrian war. They see that it might have been much cheaper just to buy everybody off in the beginning, and they may be right.

We are working on getting more details, the Holy Grail of course being what kind of political deal was cut, and who is guaranteeing it, and how Assad will respond. The Saudis of course are getting two for their money as this move takes on Erdogan, also …Jim W. Dean ]

According to the report, the Saudi delegation met with U.S. Deputy Assistant Secretary of Levant Affairs Joel Rayburn and former U.S. Ambassador to Bahrain William Roebuck in the eastern countryside of the Deir Ezzor Governate.

Another meeting was reportedly held between the Deir Ezzor tribes and the Saudi-U.S. officials at the Al-Umar Base.

The primary purpose of this meeting was to ease tensions between the tribes and Syrian Democratic Forces (SDF).