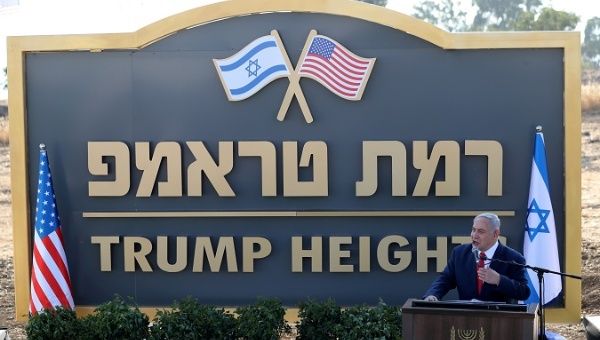 “We’re going to establish a new community, something that hasn’t happened in many years, and in honor of President Donald Trump,” Netanyahu said.

Netanyahu, however, cannot establish the new illegal settlement before the September snap elections as the interim government does not have such authority.

A snap election for Israel has been called after the scandal-ridden prime minister could not form a government despite winning the April election.

The legal advisers also said large scale administration work is needed to be done by finance ministry and the National Planning and Construction Commission before reaching a final decision.

Critics also slammed Netanyahu for not having any budget or planning behind the decision to form a community named after Trump.

“Anyone who reads the fine print in this ‘historic’ decision will understand that this is nothing more than a nonbinding, fake policy,” Blue and White representative MK Zvi Hauser said.

“There is no budgeting, no planning, no location for a settlement, and there is no binding decision to implement the project. But at least they insisted on a name for the settlement.”

In March, U.S. President Trump signed a decree at the beginning of a meeting he held with Israeli Prime Minister Netanyahu saying the United States recognizes Israeli sovereignty over the Golan Heights, a move rejected by the U.N. and most world nations.

Israel seized the Golan strategic plateau from Syria in the 1967 Middle East war and annexed the territory in 1981, an action which was never recognized internationally.

In April, Netanyahu said a community or neighborhood in the Golan Heights would be named after Trump as an expression of gratitude.

Netanyahu called his weekly Sunday cabinet meeting in the Golan Heights village of Kela Alon to ask his ministers to approve the new community. U.S. ambassador to Israel David Friedman was expected to join the Israeli leader at the event.

The prime minister’s former cabinet secretary and a current political rival Hauser said, “Let’s hope President Trump does not know that his name is being used for this public relations exercise. The prime minister must decide whether he really wants to establish a new settlement and deepen our roots in the Golan Heights or whether he is content with creating a virtual reality for the purposes of a photo op.”

Last year, Trump recognized Jerusalem as Israel’s capital and moved the U.S. embassy from Tel Aviv to Jerusalem while pulling funding to the Palestinian government as well as aid organizations such as the United Nations Relief and Works Agency for Palestine Refugees in the Near East (UNRWA).