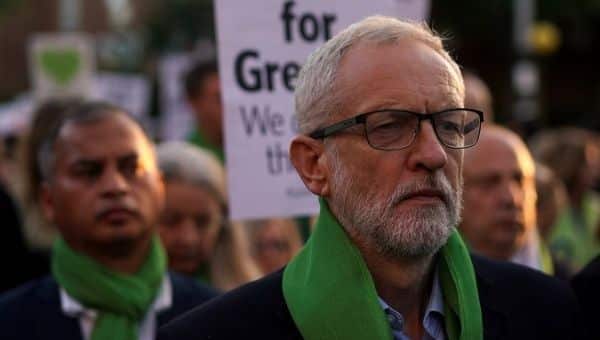 The leader of the U.K. opposition Labour Party, Jeremy Corbyn, has asked the government not to blame Iran for attacks on two oil tankers in the Persian Gulf without “credible evidence.”

On Thursday morning, two large oil tankers, one confirmed as Japanese traveling through the Sea of Oman, came under attack.

U.S. Secretary of State Mike Pompeo said he believed that Iran was behind the attacks, without going into further detail to back his accusation. He only said Tehran was “lashing out” in response to Washington’s “successful maximum pressure campaign.”

Iran “categorically rejects the U.S. unfounded claim with regard to 13 June oil tanker incidents and condemns it in the strongest possible terms,” the Iranian mission to the United Nations said in a statement in response to Washington’s accusations.

The U.K. Foreign and Commonwealth Office (FCO) also said that it was “almost certain” that “a branch of the Iranian military… attacked the two tankers on 13 June.”

Corbyn reacted to that saying, “Britain should act to ease tensions in the Gulf, not fuel a military escalation that began with US withdrawal from the Iran nuclear agreement. Without credible evidence about the tanker attacks, the government’s rhetoric will only increase the threat of war.”

Britain should act to ease tensions in the Gulf, not fuel a military escalation that began with US withdrawal from the Iran nuclear agreement. Without credible evidence about the tanker attacks, the government’s rhetoric will only increase the threat of war.

The Foreign Secretary Jeremy Hunt said that Corbyn’s comment is “pathetic and predictable.”

“From Salisbury to the Middle East, why can he never bring himself to back British allies, British intelligence or British interests?” said Hunt.

On Thursday night, U.S. Central Command spokesman Bill Urban released a video of what the U.S. military said was an Iranian Revolutionary Guard Corp Gashti Class patrol boat approaching one of the tankers “and was observed and recorded removing (an) unexploded limpet mine from the M/T Kokuka Courageous.”

The Iranian President Hassan Rouhani, however, accused the U.S. of “carrying out an aggressive policy and posing a serious threat to regional stability.”

The shadow foreign secretary Emily Thornberry said Saturday that the U.K. should not be “enmeshed in a war.”

“These are extremely dangerous developments and we really have to pause and think about where we are going next,” she told BBC Radio 4.

She also said “independent evidence” should be established but the U.K. should be aware of being dragged into a war-like situation.

“We’ve got to give up on this idea that if the United States go into war, especially one engineered by the likes of John Bolton and the neocons, we have to stop and say there are times when we don’t just follow,” Thornberry said.