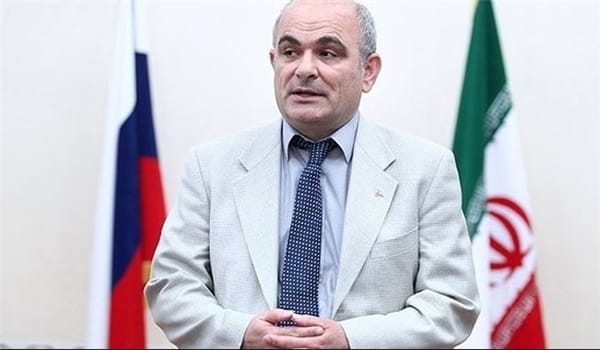 Russian Ambassador to Tehran Levan Dzhagaryan said on Sunday that it is up to Tehran, Beijing and Moscow to form a strategic trilateral cooperation to defy the US unilateral measures against the landmark nuclear agreement of 2015.

Addressing the 2nd conference on perspective of trade and cultural cooperation between Iran and North Caucasian Federal District today in Tehran, Dzhagaryan underlined that China, Iran and Russia should develop their economic cooperation to enable Iran to confront the US measures against the nuclear deal.

The diplomat underlined that Moscow opposes the unilateral moves of Washington in violation of nuclear pact, officially known as the Joint Comprehensive Plan of Action (JCPOA).

“The Russian Federation is concerned about the unfair sanctions imposed on Iran, and Russia is ready to help Iran to thwart negative impacts of the US sanctions,” Dzhagaryan underscored.

The ambassador said that Russia is determined to broaden economic ties with Iran.

On Friday, Russian President Vladimir Putin warned of the negative consequences of the US’ withdrawal from the 2015 multilateral nuclear agreement, saying the parties’ compliance with the deal would be the “only logical and correct path”.

“The Iranian nuclear program still raises concerns. The US withdrawal from the Joint Comprehensive Plan of Action – as a reminder, it was unanimously approved by the UN Security Council in 2015 – is not only destabilizing the region, but also can undermine the nuclear non-proliferation regime,” Putin said in an address to the Shanghai Cooperation Organization (SCO) heads of state council meeting in Bishkek.

“While presiding in the SCO, we intend to work to ensure that the parties to the Joint Comprehensive Plan of Action fulfill their obligations. We consider this to be the only logical and correct path,” the Russian leader added.

Iran and the five permanent members of the United Nations Security Council, the United States, France, Britain, Russia and China, plus Germany signed the nuclear agreement in July 2015 and started implementing it in January 2016.

Under the JCPOA, Iran undertook to put limits on its nuclear program in exchange for the removal of nuclear-related sanctions imposed against Tehran.

However, President Donald Trump pulled his country out of the JCPOA in May 2018 and re-imposed harsh sanctions against the Islamic Republic in defiance of global criticisms.

On the first anniversary of the US withdrawal from the nuclear deal, Iran announced that it would suspend the implementation of some of its commitments under the deal, adding that it would stop exporting excess uranium and heavy water, setting a 60-day deadline for the five remaining parties to the deal to take practical measures towards ensuring its interests in the face of the American sanctions.

In a press release issued at the end of their two-day summit in Bishkek, the SCO heads of state threw their weight behind steadily implementation of the nuclear accord under UN Security Council Resolution 2231 that calls on all the parties to fulfill their obligations unfailingly.

Russian Foreign Minister Sergei Lavrov said on Tuesday that the United States’ actions against Iran constitute a blatant attempt to pressure the international community into overlooking the United Nations Security Council Resolution 2231 in line with Washington’s agenda of “strangling” the Islamic Republic.

“Lack of ability to reach an agreement is probably the nicest thing that one can say [about US actions against Iran], because there is clearly an attempt to force the whole world to not comply with a UN Security Council resolution in order to achieve the goal of strangling a single country,” Lavrov stated at the Primakov Readings forum in Moscow.