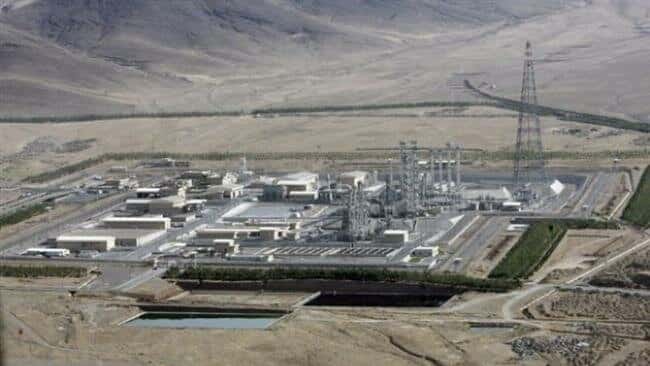 The spokesman for the Atomic Energy Organization of Iran says the country will surpass the uranium stockpile limit set under the nuclear deal from June 27.

“Today the countdown to pass the 300 kilograms reserve of enriched uranium has started and in 10 days time we will pass this limit,” Behrouz Kamalvandi told reporters at the Arak Heavy Water Reactor Facility Monday.

“This is based on the Articles 26 and 36 of the (nuclear deal), and will be reversed once other parties live up to their commitments,” he added.

Iran may also increase uranium enrichment to up to 20 percent for use in local reactors, he said. The 2015 nuclear accord caps the level of purity to which Iran can enrich uranium at 3.67 percent.

“One scenario is that we will define 3.67 for the Bushehr power station, which needs 5 percent [enriched uranium] or if we define for the needs of the Tehran Research Reactor, it will be 20 percent. Various scenarios have been envisaged.”

Last month, Iran scaled back some commitments under the deal and warned that in 60 days it would resume refining uranium to a higher fissile degree if Europe failed to shield its trade from US sanctions.

President Hassan Rouhani announced that Iran would stop observing restrictions on its stocks of enriched uranium and heavy water agreed under the nuclear deal.

Tehran has said it may go even further by July 8 unless remaining partners to the deal — Britain, China, France, Germany and Russia — help it circumvent US sanctions and especially enable it to sell its oil.

Kamalvandi said there is still time for European countries to save the Joint Comprehensive Plan of Action (JCPOA), as the nuclear deal is officially known.

“Iran’s reserves are every day increasing at a more rapid rate. And if it is important for them (Europe) to safeguard the accord, they should make their best efforts… As soon as they carry out their commitments, things will naturally go back to their original state.”

“There is still time for European countries, but if they want more time it means that they either can’t or don’t want to honor their obligations,” he said.

“They should not think that after 60 days (deadline set in May by Iran), they will have another 60-day opportunity,” the official added.

The spokesman took dozens of domestic and foreign reporters for a tour of the Arak Heavy Water Reactor Facility in Khondab region in central Iran, 190 km south of Tehran.

Under the JCPOA, Iran is permitted to keep up to 130 tonnes of heavy water at present and up to 90 tonnes once its redesigned and rebuilt Arak reactor is commissioned.

The US Department of Energy bought several batches of heavy water from Iran, but President Donald Trump halted the purchases and ordered other countries to follow suit after he reimposed sanctions on Tehran.

Kamalvandi said, “In the mind of Trump, if one does not buy heavy water from us, the facility will automatically shut down, but this is not the case because we have both domestic and [foreign] market utilization.”

Iran expects its heavy water stockpile also to surpass 130 tonnes in the next two and half months if “no new market” is available, the official said. The country, he said, may convert its surplus heavy water to better value-added products.

“Although we do not want to abandon the commitments we have made in the past and give up the markets we have found, it’s possible that with the stocks exceeding 130 tonnes, we may not export them as raw material and instead export them with added value.”