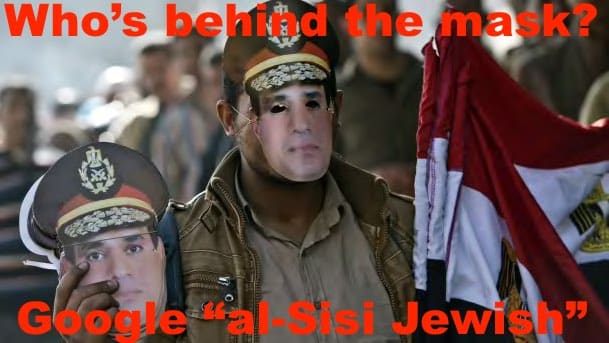 Was Egypt’s real president, Mohamed Morsi, poisoned? Or did he finally succumb to the nonstop torture and abuse he suffered during six years of imprisonment?

Either way, the man was martyred. And the monster who did it, al-Sisi, is grinning and gloating and raising a toast with his master Bibi Netanyahu.

In September 2013 I published an exposé of who al-Sisi really is. Its original title was: “Al-Sisi’s a Jew, Egypt Is Israeli-Occupied Territory.” After complaints from the ADL, the headline was changed…barely. But the content was not.

That story had half a million reads many years ago, millions of actual reads by 2019, not reflected by the counter which has been reset numerous times. Its contents have been repeatedly highlighted in the Arab media.

That the Zionists are trying to steal the entire Muslim East “from the Nile to the Euphrates” as a springboard to total global domination, in service to their God-given delusion, is hardly front page news. But some of the details are, shall we say, “sensitive.” If the Egyptian people knew who al-Sisi really is, they would, as George W. Bush suggested in similar context, chase him down the street and lynch him.

All of the lies and disinformation about Morsi cannot disguise the fact that he was a decent, pious, well-intentioned man who was martyred for trying to do his job as the duly elected legitimate president of Egypt. Morsi’s courage in speaking out for 9/11 truth, including his repeated demands for a scientific conference to determine who really authored the false flag operation of the century, undoubtedly contributed to the international Zionist deep state’s decision to terminate his presidency and slaughter thousands of his supporters.

May God have mercy on Morsi, and may He quickly usher the Zionist monster al-Sisi to his well-earned “reward” of eternal torment.