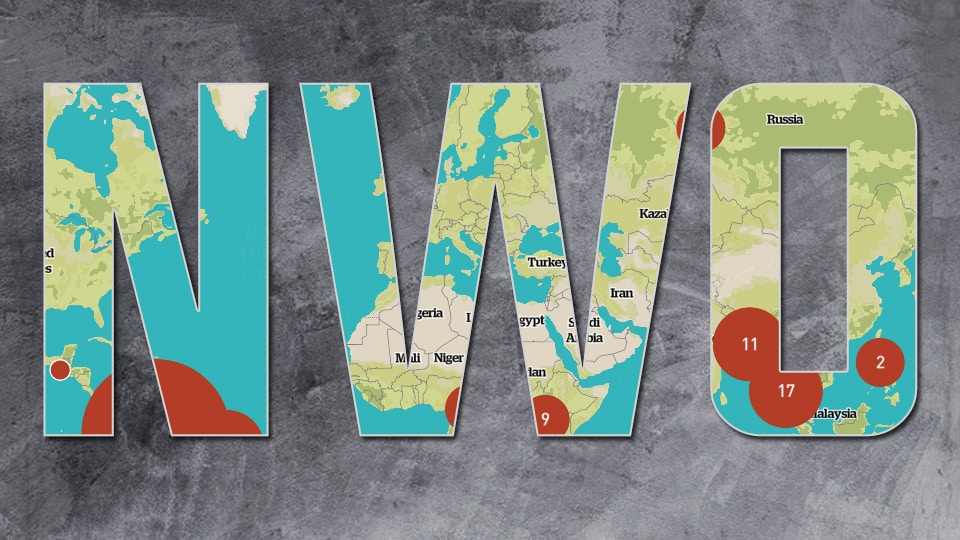 New World Order agents have good reasons to hate Russia: the Kremlin does not accept the categorical lie that Iran is a threat to any country whatsoever. The Kremlin believes that ethnic cleansers and warmongers are simply beating the war drum again. The Kremlin has enough historical evidence to back up their claims. For example, Russian diplomat Dmitry Peskov has recently said:

“We didn’t forget the vials with white powder. We remember and, therefore, have learnt to show restraint in our assessments.”[1]

Russia Today tells us that Peskov “was referring to a famous scene at the UN Security Council in the months leading up to the Iraq War. Attempting to justify the upcoming US invasion of the Middle Eastern country, then-secretary of state, Colin Powell, brandished a vial with white powder meant to illustrate the dangers of anthrax, which the US were accusing Saddam Hussein of stockpiling.”[2]

So when Secretary of State Mike Pompeo walked on the political stage and declared that Iran is to blame for the recent attack on two foreign oil tankers,[3] Peskov realized that Pompeo has been smoking something. Pompeo pompously declared without a shred of evidence: “This is only the latest in a series of attacks instigated by the Islamic Republic of Iran and its surrogates against American and allied interests.”[4]

Pompeo added: “Taken as a whole these unprovoked attacks present a clear threat to international peace and security, a blatant assault on the freedom of navigation and an unacceptable campaign of escalating tension by Iran.”[5] Peskov rightly thought that New World Order agents like Pompeo are completely out of their minds. Peskov declared:

“Appealing to some kind of classified data in this case is absurd. Incidents like that can really shake up the foundations of the world economy, so any unfounded accusations shouldn’t be considered.”[6]

The most devastating news for New World Order agents is that owner of the Japanese tanker that was attacked in the Gulf of Oman declared that the United States produced “false information” about what actually took place. The owner declared that the tanker was hit by a flying projectile, while the US said that it was hit by

“a limpet mine, which is attached to boats below the waterline using magnets…sailors saw something flying toward the vessel just before the explosion and that the impact was well above the waterline.”

“We received reports that something flew towards the ship. The place where the projectile landed was significantly higher than the water level, so we are absolutely sure that this wasn’t a torpedo. I do not think there was a time bomb or an object attached to the side of the ship.”

Keep in mind that New World Order agents have a history of summoning false flag operations in order to beat the war drum. The war against Iran is no different.

Even Germany now is casting doubt on the claim that Iran is responsible for the attack on the oil tanker. That just tells us that New World Order manipulation is no longer taking seriously.