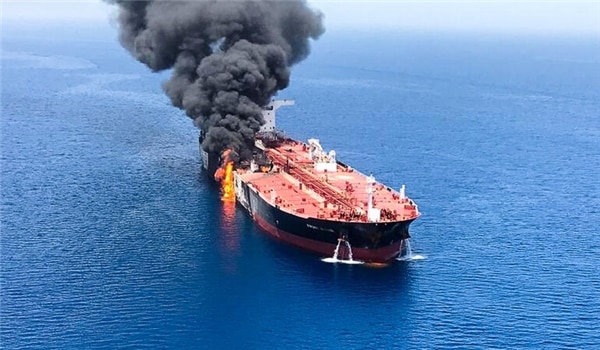 A leading Egyptian newspaper dismissed the possibility that Iran carried out the recent attacks against two oil tankers in the Sea of Oman, describing Israel as the only side and culprit to benefit from the sabotage act.

“No one should believe and pay attention to the US allegations against Iran for the recent attacks because Trump is beating the drums of war and Israel is happy with it and the result will be a highly risky to the oil region and damage for Iran and other Persian Gulf littoral states,” the Arabic-language Mesriyoun newspaper wrote on Monday.

“Israel is the number one and only side which benefits from igniting the fire of war in the region,” it added.

The paper underlined Israel’s displeasure with any progress in Iran, and added, “Therefore, all suspicions should focuse on Israel and Mossad’s possible role given the fact that Mossad played an important role in the incidents during the Arab-Israeli wars in the past and after that.”

In relevant remarks on Saturday, senior Arab diplomats also pointed their fingers at Israel as the culprit behind the recent attacks on two oil tankers in the Sea of Oman, reminding that Tel Aviv has the possibilities and incentives to do the sabotage operations to lay more pressure on Iran.

“There is yet no strong evidence to show who has targeted the two oil tankers, and hence, the door is still open to make political allegations to pressure the opposite party,” Arab diplomats told the Lebanese Arabic-language al-Jomhouriyeh newspaper.

Al-Jomhouriyeh did not name the diplomats, but also quoted them as adding, “As the US accuses Iran for the incident, Israel can also be a suspect as it has the possibilities and capabilities to do so.”

The Arab diplomats underlined that Israel was the first regime which benefited from any war between the US and Iran.

Iran has strongly denied any involvement in the attacks.

Meantime, a prominent Russian expert also said that the US has launched the Thursday attacks on two oil tankers in the Sea of Oman to spread Iranophobia, satisfy Israel and find a pretext for prolonged presence in the region.