[ Editor’s Note: I was surprised to read below Iran’s statement that Israel has the only undeclared nuclear arsenal in the region. The Saudis have had one for some time, not as big as Israel’s, but it is undeclared

And they aren’t the only ones where nary a word is uttered about them in the UN or corporate media. VT has named them over and over, with no calls or inquiries from anyone.

It seems some countries are allowed to have closet nukes and some not. Maybe there is some invisible ink in the UN Charter allowing this that can only be read with special glasses.

But all that said, it is nice to see this independent group pony up to the table without fear of repercussions, showing up the scaredy cat countries. VT gives a big salute to the Stockholm International Peace Research Institute … Jim W. Dean ] 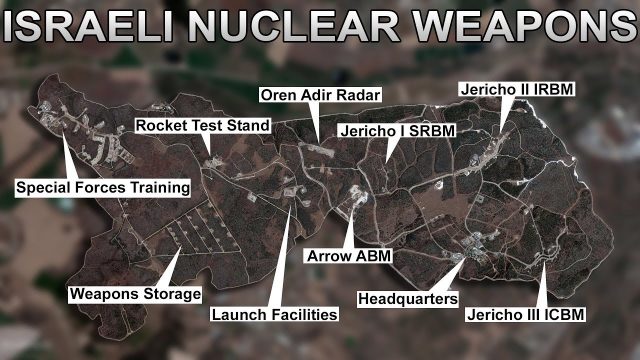 Israel, which routinely accuses Iran of trying to obtain nuclear weapons and pledges to use force to stop Tehran, maintains its own undeclared nuclear arsenal estimated at 80 to 90, according to the latest report by SIPRI.

There are nine nations in the world that currently have nuclear weapons, the Stockholm International Peace Research Institute (SIPRI) says in its newly released yearbook on the state of armaments and international security.

The world nuclear stockpile went from 14,465 at the beginning of last year to about 13,865 this year, the report estimates, as the US and Russia were delivering on their promises under the New START Treaty signed in 2010. 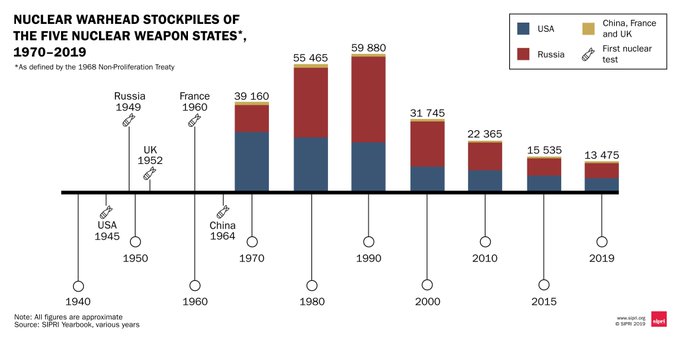 The estimate of global nuclear weapons stockpiles was 13 865 at the start of 2019. How has this stockpile changed over time?

Full analysis in the 2019 #SIPRIYearbook

Israel, which maintains a policy of neither confirming nor denying the possession of nuclear weapons, has between 80 and 90 warheads in its stockpile, the same as the year before, the institute said.

It comes as tensions between Iran on one side, and the US and regional ally Israel on the other, continue to mount. Benjamin Netanyahu, Israel’s unsinkable prime minister, has for years waged a campaign accusing the Iranians of having unwavering nuclear ambitions, regardless of the evidence, or lack thereof.

Back then, Iran fired back, saying that “no arts & craft show will ever obfuscate that Israel is only regime in our region with a *secret* and *undeclared* nuclear weapons program.”

In 2012, the Israeli leader famously brought a diagram to a UN General Assembly session, purporting to show Iran’s progress in acquiring a nuclear device, with a literal red line drawn on it.

With Donald Trump in the Oval Office, Israel has doubled down on the theatrical approach, treating the world to a tall tale about a daring spy operation that managed to steal troves of nuclear documents from a secret warehouse in Tehran. The presentation was meant to prove Tehran’s duplicity, though experts pointed out that most of the documents revealed were old and known to Iran watchers.

The IAEA indeed confirmed that Iran was on a path to exceed the limit of uranium stockpile set by the nuclear deal, just as Iran said it would.

Tehran said the move was in response to the US’ withdrawal from the agreement more than a year ago, as well as the failure of the EU to circumvent American sanctions against companies that dare to do business in Iran.