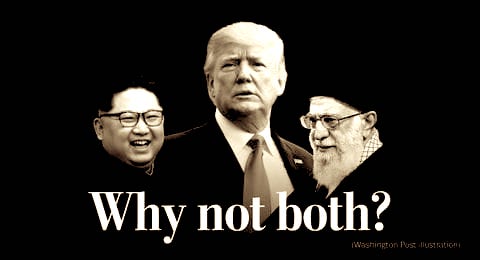 Trump is being led by the nose. The neocons are dragging him into war with Iran. Such a war would likely blow up the Middle East, cost thousands of American lives and trillions of dollars, and ruin Trump’s re-election chances. In a worst case scenario, it could turn into World War III.

There is zero chance the Iranians will back down. Their role model is Imam Hussein. They are not afraid of dying for a just cause. And what cause could be more just than defending ones own country from an aggressor?

There is only one off-ramp from the road to war: some sort of breakthrough event that would change the dynamic. That won’t happen while Pompeo and Bolton are in the picture.

So Trump needs to fire Pompeo and Bolton and go to Tehran. (He won’t be invited under any other circumstances.)

As soon as he fires Pompeo and Bolton, and repudiates their insane list of demands for complete Iranian surrender, Trump will get a call from the Supreme Leader’s office: “You are cordially invited to visit Tehran and participate in our Victory over DAESH celebration.” From the moment he touches down at Imam Khomeini International Airport Trump will get the VIP treatment. (Iranians are incredibly hospitable—the VIP facilities at that airport are one of the highlights of my annual visits.)

Trump will plump down his rotund posterior in the plushest seat of the fanciest limousine in Iran. He will be given a ride to the Supreme Leader’s office. From there the two of them, with Rouhani and Zarif in the back seat, will ride in the vanguard of the Victory over DAESH parade. Millions of Iranians will line the streets and cheer, acknowledging Trump’s contribution to the war on DAESH. “We understand and appreciate the fact that you opposed the Obama Deep State’s clandestine support of DAESH, and that you helped us finish off their bogus ‘caliphate,'” the Iranian leaders will tell Trump.

Back in the Leader’s office, Trump will agree to immediate sanctions relief. In return, Iran will agree to a series of dialogues in which all issues dividing the two countries will be up for discussion. Both sides will agree that they eventually hope to put up an “Islamic Trump Tower” in Tehran (no gambling, alcohol, or floozies; Qur’ans and prayer rugs in every room, prayer rooms on every floor). Trump will be able to say: “That idiot Obama may have stopped the Iranians from getting nukes, but he couldn’t get them to the table to talk about their rockets, their support for Hezbollah, and stuff like that. Now that the Great and Terrible Trump is in town, they are willing to put EVERYTHING on the table. What a glorious victory! Heck, they even want a Trump Tower! I am truly the master of the Art of the Deal!”

As for the Iranians, they will tell their people: “We have to give the devil his due and admit that Trump was actually somewhat helpful in our struggle against DAESH…better than Obama, anyway. We are going to talk to him and explain our positions, point out where our red lines are and why, and basically just keep talking as long as the sanctions are off.”

Just like the Trump-Kim “negotiations,” the Trump-Iran talks won’t have to actually achieve anything. As long as Trump can thump his chest, say he has scared the other side to the negotiating table, and insist that a really good deal is in the works, he will be happy.

The Zionists and their lackeys like Pompeo and Bolton will be furious. Sheldon Adelson will cancel his planned $100 million contribution to Trump’s reelection campaign. A disgraced and shamefaced Jared Kushner will stop whispering to his Chabad gangster friends that he is the Messiah. Bibi Netanyahu will have a heart attack and keel over dead. Few will miss him.

The Likudniks will fume and scheme and seek payback. But at least Trump will have a chance in hell of being reelected, which is more than he’ll have if he’s dumb enough to keep sleepwalking into a catastrophic war on Iran.