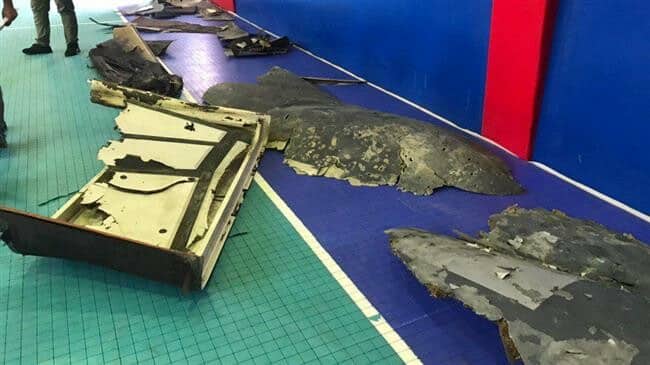 [ Editor’s Note: Here we go again with another “he said, she said”, situation. It is way past time to stop having these endless arguments of which side of the line something was shot down on.

We know the technical capability exists to make a final determination, particularly in an area like the Persian Gulf where we are all expecting such incidents to occur.

We have history of the US being very aggressive on using drones over Iran, with little concern over violations of air space. Iran was left to developing the technology to take control over one of them, land it, and reverse engineer it to have their own flying in about two years, I believe.

I don’t remember any apologies from the US, or sanctions being imposed. It was just another day at the office. The US or Iran making untruthful statements to each other is one thing, but the US making such to the American people, whenever it deems necessary, should be a constitutional issue.

In this particular case, Iran has the record of its warnings, which is standard in these incidents. They knew if they shot it down, the US would claim it was over international waters.

Our Founding Fathers warned that the public having clear knowledge about what its government was doing was the absolute bedrock of the Republic. That concept now lies tattered in shreds, and worse, with little concern from the public.

We need a Congressional investigation on this, pronto. We will know in the next 24 hours if there will ever be one … Jim W. Dean ]

Iran has released the first photos of the wreckage of a US spy drone which was shot down early Thursday after intruding into the Iranian airspace.

The IRGC Aerospace Force displayed parts of the doomed drone on Friday noon, refuting earlier claims by the US that the UAE was flying over international waters, and had not violated the Iranian airspace.

The Islamic Revolution Guards Corps said Thursday it had shot down the unmanned US aircraft after it breached the country’s airspace.

The last warning was issued at 3:55 am, ten minutes before the shoot-down, IRGC Aerospace Commander Brigadier General Amir Ali Hajizadeh said. He make the remarks to reporters on the sidelines of an exhibition held in Tehran to showcase the drone’s wreckage.

US President Donald Trump initially issued a series of cataclysmic threats, insisting that the RQ-4 Global Hawk was flying over international waters when it was taken down by an Iranian missile.

However, the GPS coordinates released by Iran put the drone eight miles off the country’s coast, inside the 12 nautical miles from the shore, which is Iran’s territorial waters.

Iranian Deputy Foreign Minister Abbas Araqchi earlier told the Swiss envoy that “there are irrefutable evidence about the presence of this drone in Iran’s airspace and even some parts of its wreckage have been retrieved from Iranian territorial waters.”

The Swiss envoy, whose country represents the US interests in Iran, was later summoned to the Iranian foreign ministry on Friday morning, and received an official note which he said will immediately deliver to the US.

In a meeting with an Iranian foreign ministry official, Swiss Ambassador Markus Leitner was asked to tell the US that the Islamic Republic is not after a war with any country, but the Iranian Armed Forces will give a “crushing response to any aggression.”

The Swiss envoy was told that the US will be held accountable for the consequences of such provocative measures.

“The Armed Forces of the Islamic Republic of Iran will show restraint as long as possible to preserve the security and tranquility of the sensitive region of the Persian Gulf and the Sea of Oman.

“But if the other side takes a provocative and unconsidered move, they will not hesitate to give a reciprocal response with unpredictable consequences,” the Iranian official noted, saying the response will be detrimental to all parties involved.

In a letter on Thursday, Iran’s Ambassador to the UN Majid Takht-Ravanchi told the United Nations that the international community needs to confront Washington’s destabilizing actions.

PressTV-Iran condemns US drone incursion in letter to UN chief

“Iran condemns, in the strongest possible terms, this irresponsible and provocative wrongful act by the United States, which entails its international responsibility,” he wrote in a letter addressed to UN chief António Guterres and the UN Security Council on Thursday.

Takht-Ravanchi wrote that Iran had the right to defend its sovereignty according to the world body’s Charter.